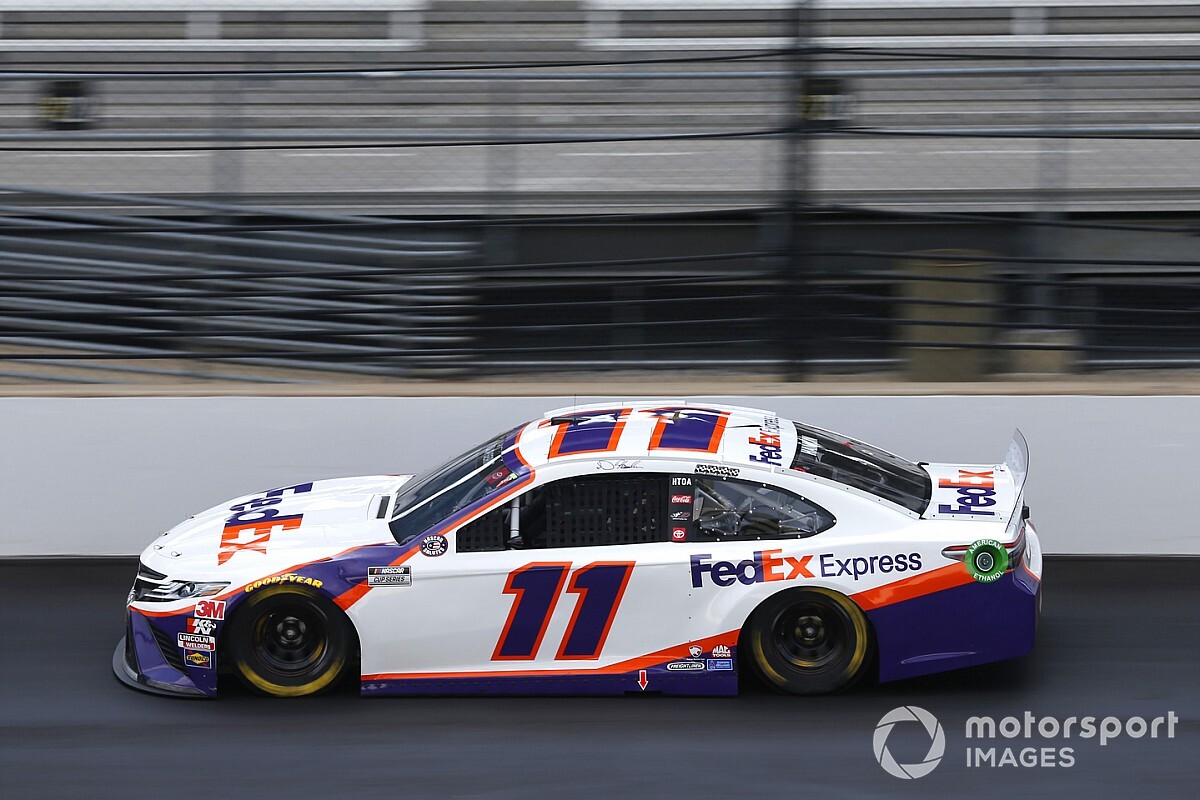 Having finally gotten a leg up on rival Kevin Harvick, Denny Hamlin lost an opportunity at his first Brickyard 400 win to a tire issue.

While Harvick led the most laps in the race, Hamlin came out with the lead following a late-race round of green-flag pit stops.

But on Lap 154 of the scheduled 160, Hamlin’s right-front tire blew, sending him hard into the wall and with it his hopes of his first career 400 victory.

Harvick inherited the lead and then held off Matt Kenseth in overtime to claim his third win in the prestigious race.

Hamlin’s crew chief, Chris Gabehart, had warned Hamlin to take care of his tires as his had shown cords during the course of the race.

“It’s just tough. We didn’t do what we needed to do and it didn’t work out for us today. I had a fast car obviously and was stretching it out there but wasn’t pushing the right-front at all,” Hamlin said.

“It’s kind of roulette if you’re going to get one that will stay together or not and mine didn’t. You saw the end result. These big races – things don’t go my way all the time.

“We’re still going to go next week and try to win the next one. We’ll do all we can.”

Regardless of the result, Hamlin said he has enjoyed what has become almost a weekly battle with Harvick for race victories this season.

“It’s been a great battle and those guys are great competitors. The last few weeks, it’s been a head-to-head with me and him. There’s probably not another guy I would rather battle with each and every week,” Hamlin said.

“Congrats to them and their team, they did a great job. Obviously, we had two very, very close and equal cars. They got it today.”

Greg Stucker, Goodyear's director of racing discussed the tire issues Sunday at IMS, explaining: "The importance of air pressure, and getting it right, is something that we cautioned about before the race.  With the high amount of downforce on the Cup cars down the straightaways, we asked teams to respect our recommended pressures so as not to hurt the tire. Early in the race, without having the benefit of any practice, teams obviously had to be very mindful of that.  Most of the race was run in the heat and teams were obviously searching for grip, while several issues happened later in the event when track temperature cooled off a bit and speeds picked up.  We had our engineers on the ground all race, working with teams as we do every week, trying to emphasize the importance of right-front pressures."