Erik Jones got some help from the damaged car of his teammate to win the Busch Clash at Daytona International Speedway. 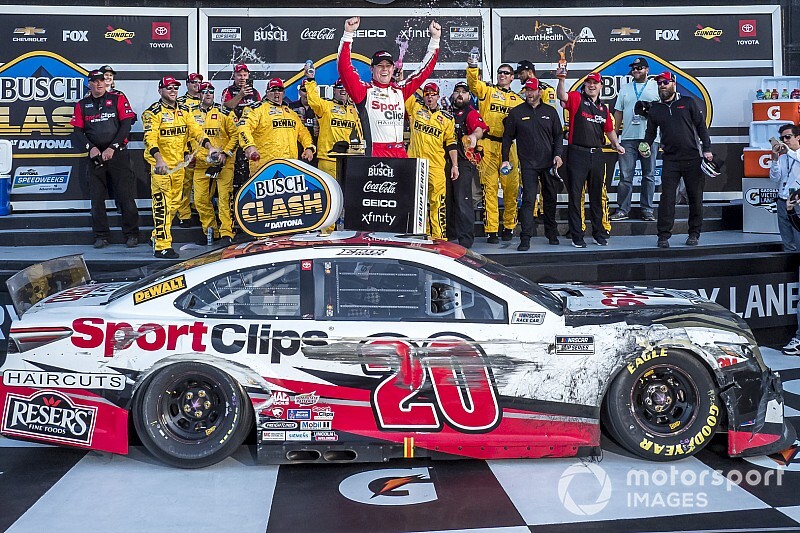 With only six cars running at the end of three overtimes, Denny Hamlin – who was a lap down – helped shove Jones into the lead on the final lap and he easily held off Austin Dillon for the non-points victory and unofficial start to the 2020 NASCAR season.

“It was an awesome race. I gotta give a huge thanks to Denny, he gave us a huge push that last run. It wasn’t the fastest car in the race but we brought it home,” said Jones, who led only the last lap in the race.

“I think honestly it was so draggy it wasn't too much for him to lock on and push us to the win. Hopefully next Sunday we can cap off another one.”

Said Hamlin: “I knew that last lap he needed to strap in because I was gonna push him. I didn’t care if there was a wreck, I was going to push him.”

The remainder of the 18-car field failed to complete the race.

Following the break for Stage 1, Aric Almirola and Newman had to start from the rear of the field – Almirola for his pit crew being over the wall too soon during his stop and Newman for speeding on pit road.

On Lap 47, the four Toyotas and Ryan Blaney pit followed on the next lap by five Ford drivers pitting.

William Byron remained on the track and cycled into the lead and appeared to be attempting to make it to the end without another pit stop.

After 50 laps, Byron led the way followed by Larson and Elliott. Larson powered into the lead on Lap 51.

Elliott moved into the lead on Lap 54 with Alex Bowman moving into second. Bowman cashed in on his opportunity to lead, moving into the top spot on Lap 57.

Joey Logano finally broke the Chevy logjam up front and took the lead on Lap 59 as Elliott dropped into second.

On Lap 63, the group of cars that had pit twice finally caught up with the group that was saving fuel and trying to stay out, producing one big pack.

With 10 laps to go, Logano remained in the lead but a three-wide battle erupted for second place.

On Lap 65, a multi-car wreck erupted off Turn 4 when Kyle Busch tagged Logano in an incident that also collected Brad Keselowski and Jimmie Johnson. Denny Hamlin navigated through the wreck to inherit the lead but his No. 11 Toyota did sustain damage.

“That’s just part of it, racing for the lead. That’s why we stay single file because we don’t know how to do it,” Kyle Busch said after the wreck. “We were good on fuel.”

On the restart with three laps to go in the race, Hamlin held the lead followed by Almirola, Truex, Newman and Blaney.

Just as Hamlin crossed the start/finish line, Harvick appeared to make contact with Byron, who then got into Newman, which triggered a massive incident from the accordion effect.

The race went into a two-lap overtime with Hamlin still in the lead, followed by Almirola, Elliott, Blaney and Johnson.

In Turn 3, Hamlin appeared to have a tire go down and he spun in front of field, triggering another big pile-up. Among those collected were Johnson, Blaney, Almirola and Jones.

After a nearly seven-minute red-flag to clean the track of debris, the race went into a second overtime with Dillon in the lead followed by Larson and Newman.

Between Turn 3 and 4, Elliott got into Larson to bring out another caution. At this point, there were six cars still on the track, with one of them – Hamlin – one lap down.

To start the third overtime, Austin Dillon remained out front followed by Newman, Bowyer and Jones.

Newman started on the pole but by Lap 2, Truex had moved into the lead thanks to a push from Keselowski. Hamlin, who started last, had already improved 11 positions.

On Lap 10, Keselowski took over the top spot as Truex got out of line after complaining on his radio that his engine temperatures were rising.

With about 10 laps remaining to the caution, Keselowski remained out front followed by Bowyer, Harvick and Logano.