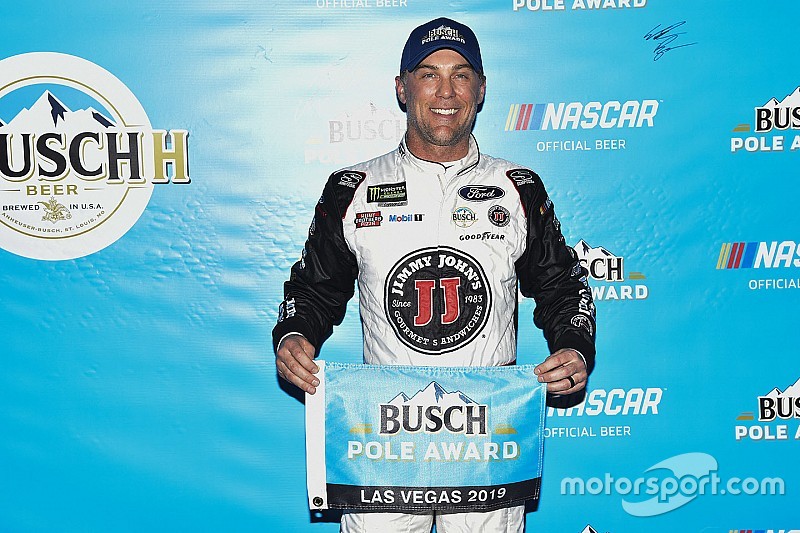 This may be one of the more unusual poles of Kevin Harvick’s NASCAR career.

Harvick emerged as the pole-winner for Sunday’s Pennzoil 400 at Las Vegas Motor Speedway when Alex Bowman and Chase Elliott who actually went faster, failed to cross the line before the five-minute clock expired.

Harvick’a average lap speed of 180.517 mph ended up topping Denny Hamlin (180.457 mph). They were the only two drivers to cross the 180 mph barrier in a session where all 12 of the final drivers waited until the final 90 seconds to attempt a run.

The pole is Harvick’s first of the season and 26th of his career.

“The fastest car in qualifying trim is fourth (Dillon). I told them before we qualified today that the fastest car would not get the pole today,” Harvick said. “In the final round it was going to come down to where you were at.

“It’s definitely different. It’s one of those situations where you don’t really know where you need to be. I had never drafted, really, in these cars. They are a lot faster than they were in the All-Star Race (last year) and the close up rate was so fast.

“We were able to run the bottom coming to the start of the second lap and that got us to the start/finish line in time to make it (count). Definitely a little bit of luck involved there but the guys have done a great job, really advancing in the last two weeks in getting what we need in these race cars.”

Harvick bolted to top of speed chart in the second round.

Also advancing to the final round were Kyle Busch, Johnson, Ragan, Elliott, Hamlin, Logano and Hemric.

“I think some of this will apply to Sunday, but I really don’t know,” Keselowski said. “I just want to go fast.”

Said Ty Dillon: “I don’t know if any of us knew what to do.”

Blaney was also not happy with how the session unfolded. “I used to have fun on Fridays and that wasn’t fun,” he said.

Austin Dillon, who was fastest in Friday’s practice, continued his show of speed in the first round of knockout qualifying.

Rounding out the Top 10 were Blaney, Bowman, Hamlin, Jones and Ty Dillon.

Several drivers attempted to draft during the session to pick up speed. Results were varied as Austin Dillon’s top speed came from a single-car run.

Among those who failed to advance to Round 2 were Aric Almirola, Matt DiBenedetto, Chris Buescher, Ryan Newman and Kurt Busch.

“My politically correct answer is that was interesting,” DiBenedetto said of the drafting during the round. “It reminds me of when we tried group qualifying on the superspeedways.”