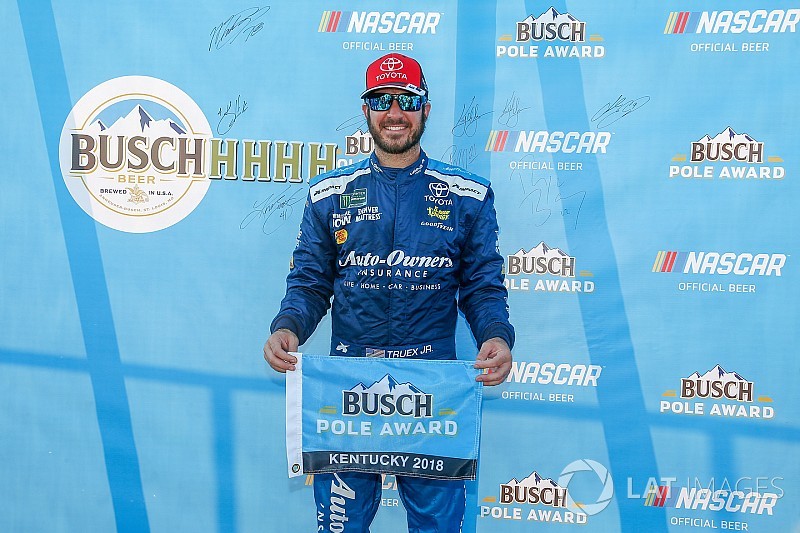 Martin Truex Jr. will have a chance to repeat his victory at Kentucky Speedway from the best position possible.

Truex, who won last year’s race at Kentucky Speedway, turned the fastest average lap speed (188.890 mph) in the final round of Friday’s qualifying to claim the pole for Saturday night’s Quaker State 400.

The pole is fourth this season for Truex and his No. 78 Furniture Row Racing team and the 19th of his career.

Truex, who was fastest in Rounds 2 and 3, had spent the vast majority of Friday’s practices running race set-up and never got a solid qualifying run completed.

“We really had to guess quit a bet for the (qualifying) set-up for here,” Truex said. “The first round I was a little bit off – some of it was driver and some of it was car.

“We did what we always do, we put our heads together and came up with a plan and we stepped it up. It feels good. Starting up front is key, the first pit stall is good for here and hopefully we can back up what we did last year tomorrow night.”

Truex rocketed to the top of the speed chart in the second round with an average lap speed of 188.976 mph – which ended up as the fastest lap recorded on the day.

Also advancing to the final round were Newman, Bowyer, Kurt Busch, Harvick, Blaney, Menard and Suarez.

Newman was the only Chevrolet driver to secure a position in the final round.

“We unloaded pretty off today. At least we’re going in the right direction,” said Bowman, who will start 15th. “We need to keep getting better, we can’t get worse.

None of the four Hendrick Motorsports drivers advanced to the final round.

Harvick led the way in the first round of qualifying with an average lap speed of 187.859 mph.

Among those who failed to advance to Round 2 were Darrell Wallace Jr., Jimmie Johnson, Kasey Kahne and Ty Dillon.

“I think we have a really good car for the race. We just need to fine-tune for the long-run,” Dillon said.

Wallace had been fast in practice Friday afternoon. Johnson and his No. 48 Hendrick Motorsports team has struggled all day. Johnson was the only HMS car not to advance to Round 2.

Elliott made it out on the track with just over five minutes remaining in the session and ended up 16th-fastest.

Hamlin, Hill, Little and DiBenedetto did not make it out on the track and will all have to start the race from the rear of the field.