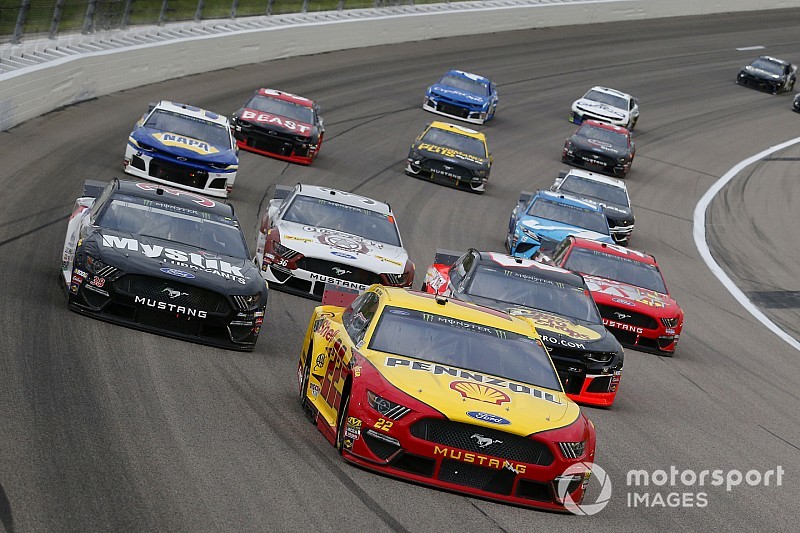 Statistically, the 2019 aero package in the Cup Series has been a rousing success but just as importantly, according to NASCAR, it has made the on-track product more entertaining.

Through 13 races – half the regular-season in the Cup series – the 2019 aero package has been used in just about every form in which it exists.

The base package features a taller rear spoiler, a larger front splitter with 2-inch overhang and a wider radiator pan. On tracks more than 1-mile in distance, tapered spacers are used to reduce horsepower and on most intermediate tracks front aero ducts have also been incorporated.

The statistical difference is striking:

“We are halfway through our regular season. We’ve had a chance now to see the package on just about every type of track that we race on with the exception of road courses and that’s coming up soon,” John Probst, NASCAR’s senior vice president for innovation and racing development, told Motorsport.com on Wednesday.

“All of the key stats that we track are up and some of them are up pretty substantially.”

In an interview with Motorsport.com, Probst gave an assessment of the racing so far this season, why it seems to work in some places better than others and whether he foresees any changes on the horizon.

What is your overall assessment of the new aero rules 13 races into the Cup Series season?

Probst: If you look at green-flag passes for the lead, they’re up 56 percent over last year. If you remember over a year ago when we were talking about creating this package, one of the key things was to create more moments of passes for the lead and passes throughout the field in general and to make races more entertaining for our fans. I think if I were to create an ‘exhibit A’ of what we wanted the package to create it would be the last restart at the Coca-Cola 600 when Martin Truex Jr. went four-wide to take the lead. Those are the kind of moments we were trying to create with this package.

I think we have all the statistics that we can look at; stats are good and a nice way to track progress, but if it wasn’t passing the ‘eye test’ with respect to the action on a lot of the intermediate tracks, it would be kind of a difficult sale, I think. This has definitely passed the ‘eye test’ and the stats definitely back that up.

It seems the longer we’ve gone into the season, the more the package as sort of come to life. Is that a product of the individual tracks or that teams have had time to get acclimated to the aero package?

Probst: I think it’s a little bit of both to be honest. I think you have seen from the team side some folks obvious hit it out of the gate while others are starting to catch up if you look at the resurgence of Chevy lately. You see a lot of their teams running much better here of late and contending for wins. Certainly, going to Pocono this weekend I think you would look at guys like Jimmie Johnson and Kurt Busch who have won there to do well. Also, you have to look at the tracks a little bit. One of the things we’re seeing with the package – and it’s not necessarily unique to the package but racing in general – is anytime we give drivers the option to run multiple lines around the track, we’ve seen better racing. If you take Kansas for example, a track with progressive racing that produced a great race. Look at Charlotte, we used PJ1 (track compound) along with the tire dragging that opened up the lanes there more than normal.

It’s a combination of both. The teams have gotten their heads around the package, we’ve seen more teams running competitively but also we’re learning as a sport as well how to intelligently use the PJ1 and tire dragging and we’ve also been able to take advantage of the progressive banking at some venues.

Two of the races that have stood out as probably not producing what was hoped for from the package – Martinsville and Dover – don’t typically have several racing grooves. Did that prevent the package from shining so to speak?

Probst: Let’s take Dover, if you look at a lot of metrics about Dover is some of our metrics on passes and the like were actually up over previous years. I think it points out there is difference between what makes a competitive race and what makes an entertaining race. Certainly in the key margin of margin of victory and (Truex) getting out to the lead that he did, particularly in the last stage, I think it points out if you have a statistically competitive race with things that don’t link to the leader checking out, it really wasn’t a terrible race. But if you look at things that create an entertaining race, a driver winning by the margin that he did is likely not considered entertaining unless you’re a Truex fan.

Dover has a history of feast or famine with us. Sometimes we’ve had lots of yellows and big wrecks and other times we go there and there long streaks of green-flag runs. When that happens, it’s less entertaining. I’m not ready to chalk all that up to the package as the track itself has a history of being back and forth. I think we need more data points on those before we make concrete conclusions on those tracks. I still think the package is capable of producing exciting racing at those venues but I wouldn’t disagree that those were two you could point to that were not massively entertaining.

In respect to producing an entertaining product, has the package passed with flying colors?

Probst: I would say we are very pleased. Last year there was a lot of discussion of what could we do on mile-and-a-half tracks to make that racing more competitive and more entertaining. If you look at the results of the five we’ve had this year, all five are up pretty significantly in green-flag passes for the lead and then also on overall green-flag passes. Yes, we’re very happy but it’s a package that when we developing it with the industry our messaging was weren’t selling this as a ‘magic bullet’ and a fix-all for everything that ails the sport. It’s just one part of it. We are seeing positive results. It’s not straight ‘A’s if this was a report card. Hopefully, we’ll continue to make progress, the teams will continue to make progress, we’ll learn more about PJ1 to produce multiple grooves and that will help the package shine even more.

Given what has taken place this season, will NASCAR stay the course on the current aero rules for the remainder of the year?

Probst: Certainly for 2019 I don’t foresee us changing anything with the package. As for 2020, we have no intentions for major rules changes (Probst said NASCAR will talk to teams about possibly adapting the splitter/radiator pan used in the All-Star Race).

Before the start of the season, there were clearly some competitors in the sport and fans who did not like the direction of this rules package. Do you feel you have won some converts?

Probst: I would say in this day of use of social media there are detractors and people who like their opinion to be heard. Obviously we had some of those early in the year and some even more recently. I can that in general on the competitor’s side, I think when they all got out of their cars from the 600, you have to look at that and say, ‘That was pretty fun.’ You do see more and more being less negative if nothing else. Certainly the package has produced a lot of metrics moving in a positive direction. Our ratings our up, our attendance is up. If you look at the All-Star Race and 600, they were up double-digits in attendance. I think that builds up off a successful Kansas. Pocono is up so far and that’s building off a successful Charlotte. When we go to Michigan, the early signs are they are up as well a little bit.

If we build momentum with attendance and with ratings, I think it’s a bit like a fly-wheel, nothing by itself will get it spinning at the speed it needs to be going, but it’s just little pushing. We just need to keep pushing the wheel a little bit. As we get close to the playoffs, people will get more aggressive. We’ve only got six drivers locked in right now with wins. If we’re four-wide at Charlotte for the win, at Pocono with that frontstretch, heck they could be eight-wide. I’ll tell you one thing, by the first turn it better get thinned out or it could be pretty big.

NASCAR could adapt a Gen-7 car component by next season

Roundtable: Expect a wild race at Pocono this weekend