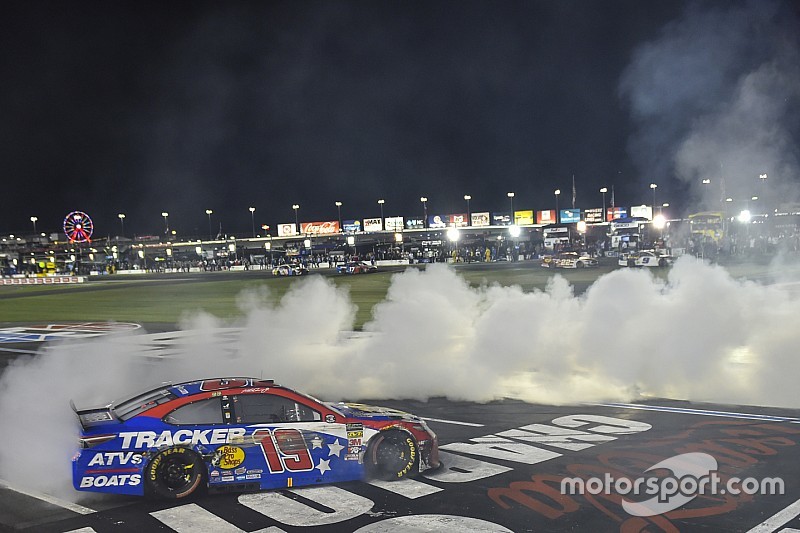 It’s taken some time for Martin Truex Jr. not only to get accustomed to his new home at Joe Gibbs Racing but also finding success on the track with NASCAR’s new aero package.

What is evident, however, is that both Truex’s No. 19 Toyota team and the driver himself have been able to craft the compromises needed to once again return to their winning form.

Sunday night’s victory in the Coca-Cola 600 at Charlotte Motor Speedway was Truex’s third in the Monster Energy NASCAR Cup Series this season, all coming in the last five races.

Truex was by no means a slouch to start the year, but it was clear he and crew chief Cole Pearn were going through an adjustment period to the team transition and the new rules package.

The struggles were especially evident at the start of the season on intermediate tracks, which had become the cornerstone of their success in recent years.

“I think we had a couple bad races at Texas and Kansas and just trying to figure out this new package. It’s been a challenge,” Pearn said. “You kind of go down a path, and these weekends, how quick they go, you’re kind of stuck with what you brought and it doesn’t work and you’re kind of in trouble.

“It’s been that way, and we just kind of refocused coming here with kind of a different game plan and really took a positive attitude to it and try and figure out what Martin needed. We worked on him a lot to embrace the package and drive in a different way, and he did perfect, and we did better for him.

“When you can complement each other and both do better, it shows a sign how good a team we have.”

Truex’s 116 laps led at Charlotte in the 600 were the most on an intermediate track this season and third-most in a race this year. On his way to the win, Truex also captured a win in Stage 3 in the race, just his second stage victory of the 2019 season.

Catching up to the new rules package

Truex admitted the new aero rules – which include lower horsepower, increased downforce and front air ducts in many races – have proved a difficult adjustment.

“It’s definitely been difficult for me, and I think for us as a team. It’s just so different than what we’ve been doing for the last couple years,” Truex said. “With the success we’ve had, it’s hard to change. It’s hard to say, ‘Hey, we can’t keep doing that stuff we were doing before.’

“So, we had to look at it all differently. I think our guys are really, really smart, and I just kind of buy into whatever they think, whatever direction they think we need to go.  I just continue to give them input, and my opinion on things, and we just do I feel like a good job of communicating and working together.

“I can take criticism from them and vice versa without getting upset or getting our feelings hurt. We just kind of go in there and lay it out, lay it all on the table.”

With this third win of the season in hand, Truex and the No. 19 are solidly locked into the playoff picture and it’s by no means too late for them to rack up more playoff points which could help carry them into the Championship 4 once more.

“I’m just glad that we’ve been able to win with this package,” Truex said, “because I know we’re going to have it for a while and we need to just try to run with that momentum.”