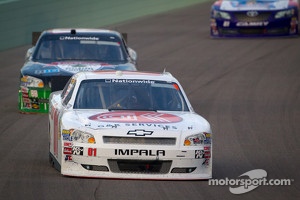 When the 200-lap started, Mike Wallace was lined up 34th place in the No. 01 G&K Services Chevrolet. His teammate, Danny Efland, started 42nd in the No. 4 Tradebank Chevrolet.

For the early going, they both ran pretty much where they took the green flag.

However, they started to move up the scoring pylon by lap 50 with Wallace in 27th and Efland now up to 35th place. With the race free caution up until then, cars started to go down laps as the leaders kept a face pace.

Wallace and Efland would hit pit road for fuel, tires and adjustments and jump back into action.

However, the pace of the race was slowed on laps 66, 73 and 94 when two different cars suffered single-car spins, one twice, to bring out the first cautions. Since most teams had already hit pit road, there wasn’t a large number of takers for pit stops on the first two.

The entire field came down pit lane on the third caution to get tires, fuel and make needed adjustments looking to make a long, green-flag run. When the race restarted at the halfway point of lap 100, Wallace had dropped back to 32nd and Efland 33rd.

From there, Wallace did what he does best by moving forward breaking back into the 20’s within 10 laps. More cautions late in the race brought the field together, allowed for wave arounds – which Wallace took advantage of – and put the championship drivers close to each other in competition.

Another restart with 15 laps to go had Wallace in 25th place with everyone looking for a great finish up front, a championship finish for some and a good finish for the rest.

The final circuits played out and the No. 01 G&K Services Chevrolet came under the checkered flags in 26th place. Efland, who was trapped laps down early, didn’t have a chance to recover and gain positions. Thus, they were saddled with a 31st-place finish.

Mike Wallace quotes: “We battled handling conditions early in the race that kept us from moving through the field the way we wanted. Once we were able to make some adjustments when the cautions started, it helped us out there.

“We took advantage of some later cautions for wave arounds and that helped us gain back some of what we lost. But, we did the best we could and finished where did with a car in one piece.

“I’d like to congratulate Ricky Stenhouse, Jr. on his second championship. I would like to thank Johnny Davis and everyone else on this team for their hard work and commitment to this team.