Hagan will fight to the finish, despite the odds being stacked against him 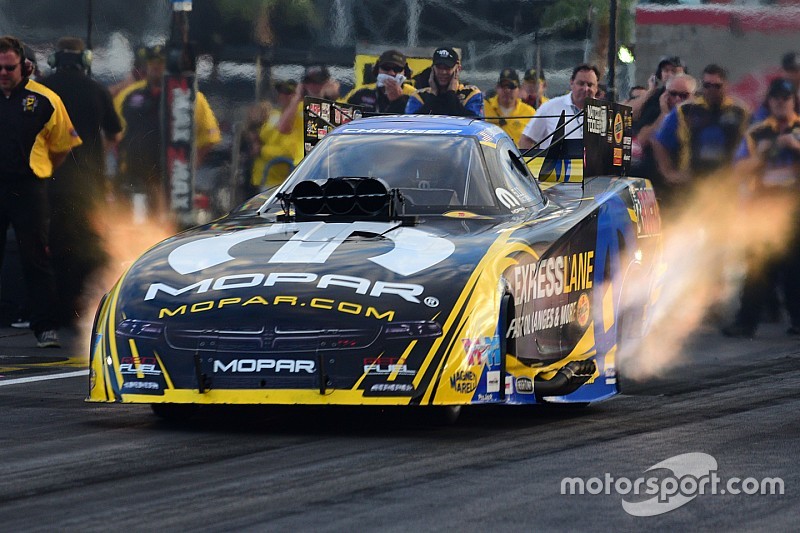 Capps has never won a championship, has been runner-up four times, owns 50 Funny Car “Wally” winner’s trophies in the category’s 50th season and has 86 points in hand as the finals loom this weekend. With 20 points for each round win in eliminations on Sunday, that could be enough, except for the fact that Capps has some mighty powerful competition.

In fact, the only racer who can stop the California-born-and-bred driver of the NAPA Dodge Charger R/T from claiming his first title is teammate Matt Hagan. The cattle farmer from Christiansburg, Virginia already owns two championships - in 2011 and 2014 - both coming with Don Schumacher Racing. Hagan broke into the Funny Car ranks with this team in 2009 and the driver that helped him most coming in was, you guessed it, Ron Capps.

A tough climb ahead

For that reason, “We have got a long ways to go,” Hagan told Motorsport.com. “Gosh, we’re 86 [points] backwards and that’s five rounds with only four rounds left. Unless Capps does something pretty stupid, you know, he’ll probably win this thing. There’s still a chance and I’m a competitor. At the end of the day, you put your mouthpiece in and pull your helmet on, close the visor and hope for the best, do the best job you can out there.”

Don Schumacher Racing is a multi-car enterprise and, although there is no “I” in team, there’s not very much these two squads, with Capps’ tuners Rahn Tobler and assistant Eric Lane and Hagan’s Dickie Vendables can share in terms of setups at the Pomona strip this weekend. They run some different clutch parts - and beyond laid-back headers, clutch activation and usage are the current black magic of Funny Car.

Hagan and Venables started running a 6-disc clutch late in 2014 and it has taken this long to get the car good enough to contend for a championship, using that setup. “Dickie Venables spent two years trying to run a 6-disc; we suffered through it the last two years, finishing fifth last year because of it. It’s just part of this business: you sacrifice a year or two here and there and we’re right back where we need to be. I feel strong about our racecar.”

The other Don Schumacher Racing Funny Car teams have tried this setup and it hasn’t worked well enough yet for them to switch, chasing the other three teams back to the 5-disc that suits other aspects of their setups. “Beckman tried to put the 6-disc in at Vegas and it didn’t work out so well, so they brought it back out and put the 5-disc back in,” earning P1 at the end of qualifying over Hagan with a 3.781 beating a 3.782. Both Hagan and Capps exited the race at Vegas in the semifinals.

So Hagan’s Mopar Express Charger R/T team are a technical anomaly in the Schumacher stables. It’s interesting to see this fearsome foursome’s intra-squad combat for the championship. Either Capps or Hagan will take the title; Hagan and Tommy Johnson Jr.’s Make-A-Wish Dodge Charger R/T could be battling for third place. Jack Beckman’s Infinite Hero Charger R/T is currently fourth but the 2012 champ is under siege by 16-time champ John Force and reigning titleholder Del Worsham.

Hagan is quick to credit his team for getting him off the farm tractor and into a competitive racecar 24 times a year. “I think, well, I’d love to sit here and tell you I’m a great driver and I’ve done this and done that, but at the end of the day it comes down to the people like Dickie Venables. Those guys that surround me are motivated, driven, work hard - their work ethic is phenomenal - those are the folks that make you shine. I’ve been fortunate,” Hagan says, “to surround myself with really bright, intelligent, driven individuals that make me look good. I just try not to mess it up.”

Hagan must feel optimistic about the weekend ahead

He’s had a good Countdown to the Championship playoffs, including a victory in Dallas, Texas for his fourth of the year in the fourth of six Countdown races. “We’ve had a great racecar all Countdown. There’s been a little tough luck here and there, some coulda, woulda, shoulda.” At Reading Hagan rushed home to welcome a new baby, then came back to the Pennsylvania track for eliminations. “I hadn’t had no sleep and coming back it was just crazy. It might cost me the championship, but he’s (Capps) done a good job of ‘out-rounding’ us. You tip your hat to those guys; they’ve done a good job.”

What would be the best scenario? Getting some of those “little” points in qualifying that give 3, 2 and a single point to the top three qualifiers (there are four opportunities) would help. Taking No. 1 would be nice too.

For Hagan, “I’d love to meet Capps in the first round. We’re gonna try and qualify No. 1 because we need the No. 1 points, too, to make it happen. If we could meet him in the first round, that would be the sun, the stars, the moon wide open - just a perfect moment. That’s why we go up there on Sundays and race. It’s anybody’s ballgame at any time.”