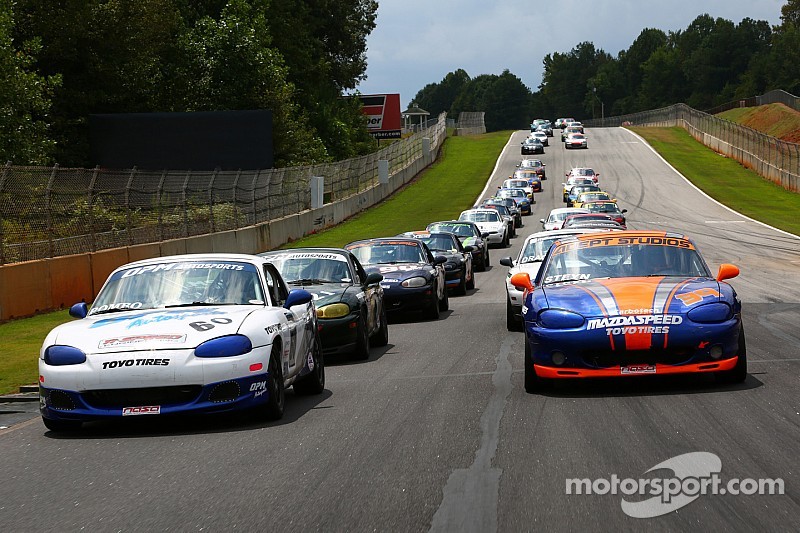 More than 250 racers took to the track.

Opening the championship races was the Spec E30 Class. The 30+ BMW competitors took the green with J.P. Cadoux taking the lead in his No. 63 BMW 325. A full course caution flew on lap two bunching the field. The race restarted on lap four with Cadoux being chased by double qualifying race winner Michael Shawhan in his No. 2 BMW 325 and the No. 12 of Larry Fraser. Fraser made the pass up into Turn Two and led the rest of the race distance. Fraser celebrated by turning several celebratory victory "doughnuts" in the infield following the race.

"On the restart I hung back just a little bit to get a run on the two guys in front of me," Fraser said. "I knew they would get boxed up around the start/finish line and I was able to get a run on them going up into Turn Two. My car was handling OK. It went away toward the end of the race. J.P. (Cadoux) had more pace than me at the end of the race and if there were a few more laps he would have passed me. I was able to keep him behind me in the passing zones and go on for the win. When you win you have to do something. I was thinking about doing the doughnut celebration this morning."

The Spec Miata race had double qualifying race winning driver Mark Drennan starting from pole position in his No. 10 Mazda Miata. Drennan proceeded to drive to a gap of nearly three seconds in the first four laps. On lap eight Kyle Loustaunau, No. 40 Mazda Miata, got by Drennan exiting Turn 12. On lap nine Drennan went wide at the exit of Turn Five and dropped back to fourth allowing Loustaunau to increase his lead to the second place runner of Hernan Palermo, No. 13 Mazda Miata. On lap 16 a full course caution flew forcing the race to end under yellow with Loustaunau taking the victory. The top three in Spec Miata were winner Loustenau, Palermo and Drennan in third.

"I knew it was going to be a tough race," Loustaunau said. "Drennan is one of the best drivers in our region and the country. It was a real close race. I had some contact with him in Turn Seven. I got into the marbles a little and I slid into him hitting his door and it affected my front grip for three laps. Slowly the car came back to me. Then he made a mistake in Turn Six when he went off a little and I got bye and I was able to go on for the win. I want to thank everyone at NASA, Toyo, Mike Haig, Ron Allen Ken Henrickson and my mom and dad. I couldn't have done it without them."

In Spec 944, James Foxx was at the head of the field for the start of the 40-minute race in his red No. 15 Porsche. Foxx and Charles Buzzetti, No. 908 Porsche, swapped the lead three times in the first two laps and continued to do so until lap when Foxx got back by Buzzetti to lead. On lap 14 Buzzetti passed Foxx once again when a full course caution flew on lap 16 ending the race with Buzzetti winning. The top three were Buzzetti, Foxx and the No. 149 of Dan Pina.

"We had a great race. It was awesome," Buzzetti said. "I put new tires on for the race. The Toyos were a big deciding factor for how the car worked. Foxx and I traded positions a bunch of times for the first half of the race. We went through the esses side-by-side it was great. The early section of the track from Turn One to Turn Six I think I was a little better than him."

Andrew Ogilvie led handily the entire race in his No. 876 Honda Civic on the strength of his pole position from winning the two qualifying races. Winning by a margin of more than 30 seconds to the No. 33 Acura of Thomas Lepper and the third place finisher the No. 23 Honda CRX of Steve Peterson.

"Starting from the pole helped," Ogilvie said "I got blocked by a Spec E30 into the Carroussel and I just stood on the gas. At that point it was mine to lose and it worked out. I want to thank God and my crew for all of the help. My sponsors Wolfgang Foreign Car Service and Ioport. Black Tracks did a great job and I got a lot of help from Louis and James. Meticulous maintenance was the key to the win."

In HPD Challenge two, Jeremy Croiset the qualifying race winner from Friday and Saturday was put to the back of the field due to a technical infraction following yesterday's race. Although he started on the last row, Croiset made quick work of the competition in front of him and was leading the class by the end of the lap one. Croiset went on for the win followed to the stripe by Ryan Flaherty, No. 28 Honda CRX and third was Marcel DeKerpel in the No. 371 Honda Civic.

"The start wasn't the greatest," Croiset said. "I was a little slow on the launch and I was able to go on the outside of Marcel into Turn One. I tucked in behind my brother (Shane) and followed him into Turn Seven. I went around him on the outside just into seven. After that I had to manage traffic. There were a few cars that weren't playing nice in traffic. I ended up dicing with the HPD Challenge 1 car of Andrew Ogilvie. I was able to get the win. I want to thank Toyo for a great tire. They were very consistent. I was watching my Aim Solo unit to keep my lap time consistent."

In GTS Matthew Powers, No. 46 BMW M3, was able to gap the field by nearly five seconds just eight laps into the event and drove his GTS4 car to the overall and class win. In GTS5 Daniel Akhrometsev was the winner in his No. 16 BMW M3. The GTS3 victor was Andrew Morton in his No. 0 BMW and in GTS2 Tristan Littlehale won in his GTS2 No. 54 BMW. Sylas Montgomery drove his No. 71 BMW to the GTS1 win.

"It felt fantastic," Powers said. "We made a couple of changes last night and the car felt really balanced. We knew we had to get a good start. My competition had a little more power and a little more weight, so the start was critical. The car was under me the whole run."

"There was a lot of traffic, especially in the middle of the race when we caught the Honda traffic," Akhrometsev said. "I didn't want to overdrive it. I am proud of my performance. The car ran good, although it was a little slippery at the end. I ran the race at 90% just to make sure I didn't make a mistake."

"I had to run a clean race," Morton said. "I have a couple of seconds on my competition so it was a matter of not making mistakes out there today. It was a good clean event, no pace car, just a couple of local yellows. The car was good, 20-year old technology, you can't beat it."

"It was a challenging race," Littlehale said. "I had to start from the back as I got disqualified after the race yesterday. I had some pressure to get back up through the field, but I knew I had a faster car than everyone else. I had to count on the full 45-minutes of racing to get up through the field."

"Everything worked really well," Montgomery said. "The car was very stable and predictable. The brakes started to fade at the end, so I just backed up my braking zones and kept hitting my marks. I was really good through the esses and was able to carry a lot of speed out of turn eight all the way Turn 12."

In SU Joh van Caneghem kept up his weekend win streak by taking the victory in his No 7 Mazda powered DPO2.

"It was great fun," van Caneghem said. "We had a false start. I thought I saw the flagger make a move and then I had to check-up and we had to come back and do it again. I got it right the second time. The car ran great all race. I had some overheating issues, but I just kept on going."

In ST1 it was Craig Ames taking the win in his No. 373 Porsche. In American Iron Corey Weber took the championship event in his No. 47 Ford Mustang. In ST 2 James Wagaman drove his No. 98 Mazda RX-7 to the win. Michael McAleenan took the ST3 victory in his No. 3 BMW M3.

"It was a little slippery at the end of the race," Ames said. "I wanted to put as much distance from the rest of the field as I could at the beginning of the race. The start was a little crazy. You have to expect that sometimes as everyone out here is very competitive."

"It not easy to get in front of Ryan Walton and stay there," Weber said. "I had a pretty loose car. I was having trouble getting the power down out of the corners. He missed a shift right before the Carrousel and I was able to get by him. I think my tires lasted a little longer than his."

"It was an excellent run," Wagamen. "The car ran great. I had a good battle with the guys in the other classes. It was a very good race and my car handled and performed as expected."

"The start of the race was crazy," McAleenan said. "The first was waved off and the second one everyone was all over each other up into Turn Two. I tried to keep my nose clean. The car ran perfectly. I couldn't ask for a better performance."

In PTB Eric Powell drove to the overall race and class win in his No. 74 Mazda Miata. In PTC is was the No. 00 Mini Cooper driven by Ricky Johnson that took the victory. In PTE it was the No. 64 Mazda Miata of Randy Evans on top. Fred Hanks was the first Thunder Roadster to cross the line in his No. 2 and in the Legends Class it was the No. 43 Ford Sedan of Dave Allen taking the win.

"It was a lot fun," Powell said. "Worked my way through the field as clean as possible. The car was really good. I ran on a set of Hoosier tires for the first time and it was awesome. I want to thank Mazda, Hoosier, CC Fab, GoPro, Hawk Performance, Royal Purple, Winding Road and Red Line Autosports."

"It was a tough race," Johnson said. "I put on new Hoosier tires at the beginning of the race. They come in faster than my competitors, so I give up some on the start until I build up heat in them and then I can go. I was able to keep the car competitive all race and made a clean sweep of the weekend winning both qualifying races and the championship. A great weekend."

"I thought the guys at the beginning would give me a little more respect, but they didn't," Evans said. "I thought they would let the old man go, but they didn't. I had to work my way back up through the field from a bad start. I was just picking them off one-at-a-time. I had an awesome set of Hankook tires."

Cindi Lux among the drivers to chase NASA honors in California