Ex-Formula 1 star Heikki Kovalainen admits he was “too cautious” in the rain en route to SUPER GT victory at Autopolis last weekend, having thrown away a potential podium at Fuji a month earlier.

The key to the team’s victory was a decisive switch to wet tyres just before the second of the three safety car periods, which allowed Nakayama to sprint into the lead shortly after the race went back to green.

Prior to the pitstop, Kovalainen had to spend several laps on a partially damp track on slick tyres, as the majority of the circuit remained dry after early showers.

Kovalainen says he employed a cautious approach during his stint, with memories of outbraking himself and crashing into the back of the Bandoh Lexus at Fuji still fresh in his mind.

“In the last race, at Fuji, we had a chance to finish on the podium but I made a stupid mistake there and I cost us the race,” Kovalainen reflected.

“I was a bit disappointed. I was determined to make amends for that. Even it’s been a hard season for us, we’ve keep working hard.

“This weekend we’ve managed to improve our car. Even in qualifying yesterday we were quite competitive. Of course today, crazy race, a little bit like Sugo 2016 with Kohei-san [Hirate, then-teammate]. And it seems SARD always does well in tricky conditions.

“My stint was okay, I was a little bit cautious when it rained, maybe too cautious. I knew that there is going to be a lot of action in the race towards the end of the race so I cannot make a mistake.

"If I lose positions, this is going to be costing us too much. So when it was raining, I was a bit cautious.“

Although Autopolis marked Kovalainen and Nakayama’s first victory of 2019, the two have largely been consistent this season with three top-five finishes in the first five rounds.

However, Kovalainen feels he hasn’t been “performing at my best” and is targeting an improvement in performance as the series nears its climax.

“I think we still got work to do, we still must improve,” Kovalainen said. “But I think this weekend we made a good step forward with our performance. So I hope that even in Sugo and Motegi we can be hopefully more competitive than earlier this season.

“Sometimes I think SARD doesn’t get enough credit for how hard they work, the people work really hard to improve even when things are wrong. So we keep doing the same.

“Also I feel I want to improve myself, I don’t think I’m performing at my best, I think I can do better. So my target is also improving in the next race, my driving.“ 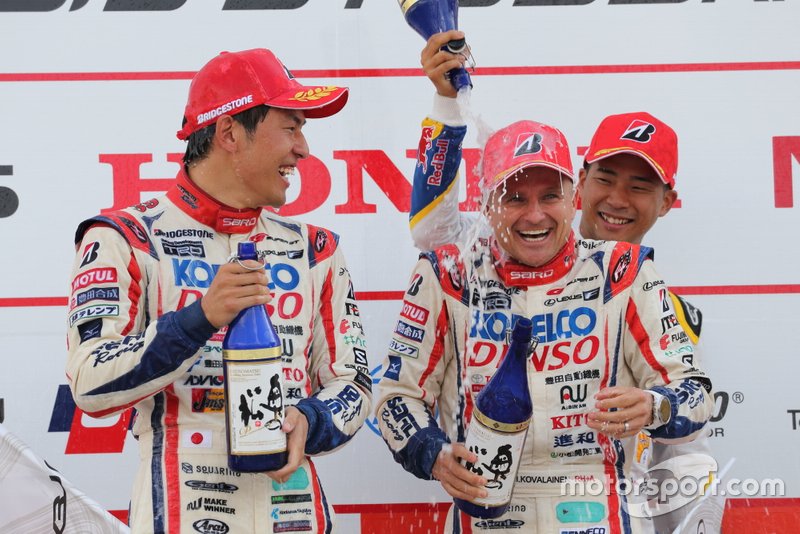 The Autopolis result propelled Kovalainen and Nakayma to third in the standings, 25 points behind LeMans Lexus pair Kazuya Oshima and Kenta Yamashita with 42 points on offer in the final two rounds of the season.

Nakayama, who became the first GT500 rookie to win a race this season, says the chances of SARD winning the crown remain realistic - and that he will be pushing for the team’s first title since 2016, when Kovalainen and Kohei Hirate shared honours.

“SARD hasn’t won for a few years now the championship, so we are really aiming for it now,” said the 28-year-old.

“As we all know SARD has a really strong core power and when it comes out, nothing can stop us. Now that we are strong and we found a set-up that I think that will give us advantage in the next two races.

“We can use it to a positive and to achieve our goals and what we want to have. For me as my rookie year in GT500, very happy to have won this race and I’ll keep fighting.”

Kovalainen added: “[In] Super GT everything is possible, like we saw on Sunday. Before this weekend we were almost, almost forget the championship for this season and suddenly we are P3. So we keep trying.”

Future of Super GT in Thailand in doubt over costs