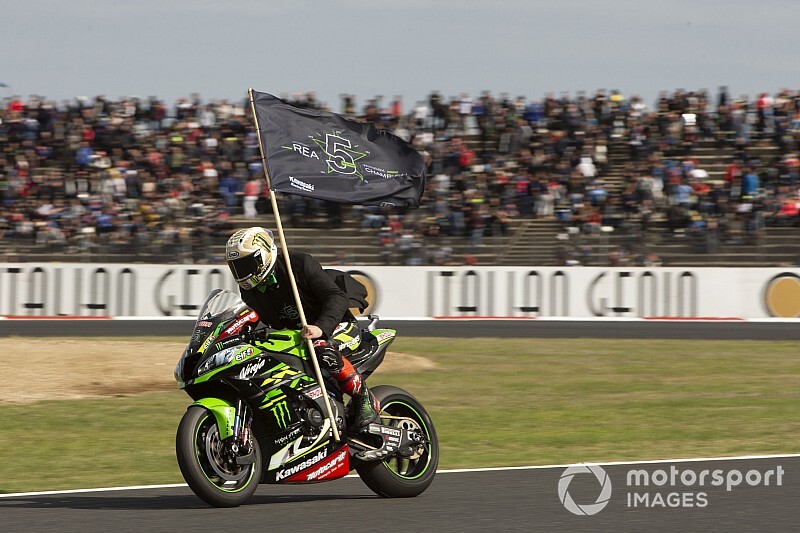 Jonathan Rea is the 2019 World Superbike champion, after taking victory in the second feature race in France while main title rival Alvaro Bautista crashed early on.

WSBK’s first five-time champion held a 61-point deficit to Bautista during June’s Jerez round, but a spate of crashes allowed Rea to overturn that deficit to come into the final race at Magny-Cours 104 points clear.

Rea beat poleman Toprak Razgatlioglu on the run to Turn 1 at the start, with the Puccetti rider dropping to fifth after he was forced to run wide at the Adelaide hairpin when he suffered a massive snap under braking.

This released Yamaha’s van der Mark into second, and he moved ahead of Rea into the Nurburgring chicane.

Razgatlioglu quickly got back on terms with Ducati’s Alvaro Bautista, and edged ahead with a move up the inside of Turn 13 on lap two as he sought to secure a third-successive win.

However, he lost the front of his ZX-10RR, and Bautista was powerless to avoid striking Razgatlioglu’s bikes.

This made Rea’s unlikely coronation a reality, though he still had to win the race ensure a record fifth-straight world title.

Rea set about trying to cement his title with a move on van der Mark into the Imola chicane on the sixth lap.

This battle allowed the sister works Yamaha of Alex Lowes to close right in, with van der Mark once again taking the lead on lap eight.

Rea and van der Mark continued to trade places over the next few tours, with the Kawasaki rider making the decisive move on lap 13 at the Nurburgring chicane.

He proceeded to build up his advantage over van der Mark, which stood at over a second as he started the penultimate lap.

Rea remained unchallenged to the chequered flag to secure the title with six races to run, etching himself into the history books as WSBK’s most successful rider ever.

Marco Melandri’s completed the top six on the sole-remaining GRT Yamaha, after teammate Sandro Cortese dropped out of the race.

Leon Haslam on the sister KRT bike was seventh, with BMW’s Tom Sykes, Honda’s Leon Camier and the Pedercini Kawasaki of Jordi Torres rounding out the top 10.