Van der Mark ruled out of Misano after practice crash

Yamaha World Superbike rider Michael van der Mark will miss the remainder of the Misano weekend following his heavy FP2 crash, which has left him with multiple injuries. 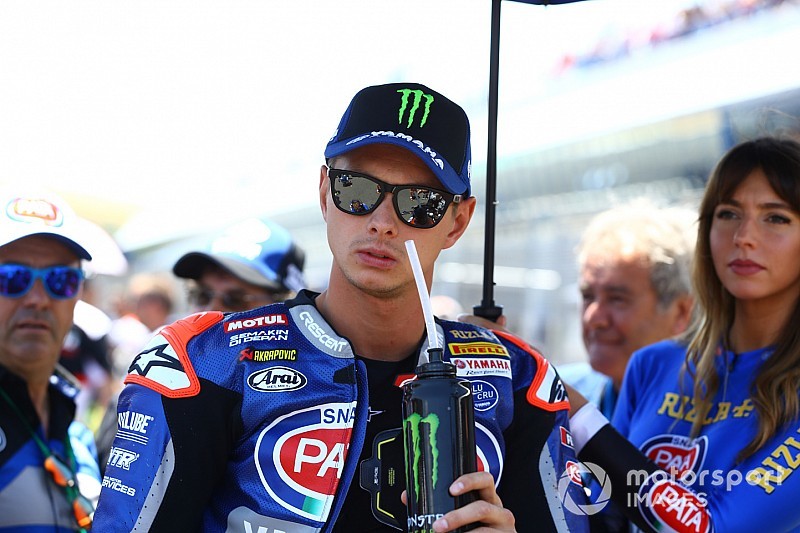 Van der Mark had just set the overall pace in the latter stages of FP2 when he suffered a violent highside crash exiting the final corner right at the end of the session, which brought out the red flag.

He was attended to by circuit medical staff at the side of the track before being taken to the medical centre for checks, where he was diagnosed with polytrauma, as well as a concussion and fractures to his right wrist and ribs.

A statement from Yamaha on Twitter confirmed that he will sit out the rest of the Misano weekend, while also revealing his wrist will require surgery.

“Michael van der Mark will miss the remainder of the Misano WSBK weekend,” the statement began.

“The Pata Yamaha WSBK rider fractured the trapezium and radius on his right wrist in his FP2 crash.

“The radius fracture will require surgery. He also sustained fractures to ribs nine and 10 on his right side.

“The Jerez race winner will remain under observation in hospital for 24 hours as a precautionary measure.”

Van der Mark ended Yamaha's near year-long win drought in WSBK last time out at Jerez, when he fended off reigning world champion Jonathan Rea to take victory in the second feature race at the Spanish venue.

Van der Mark led the Friday timesheets at Misano by 0.008 seconds from Rea after usurping his best lap on combined times from FP1 with a 1m36.021s.

He is now the third full-time WSBK rider in 2019 to be sidelined for the Misano round, with Go Eleven's Eugene Laverty and Honda's Leon Camier still recovering from injuries sustained in accidents at Imola last month.