Muller takes Race One victory ahead of Coronel 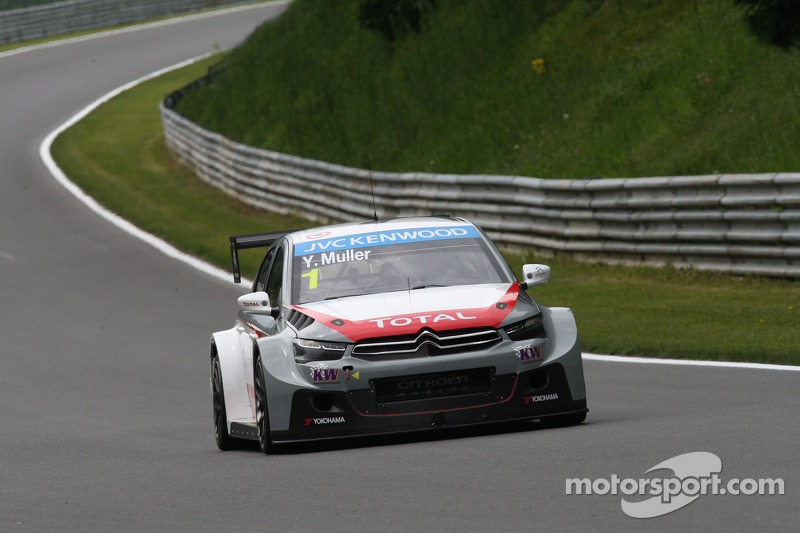 Yvan Muller wins for the third time this season.

Yvan Muller took a beautiful win in Race 1 under the sun at the Salzburgring.

The Frenchman made good use of the pole to carry on his race almost undisturbed. The man of the race, though, was Tom Coronel, as the Dutchman conquered a brilliant second position at the wheel of his ROAL Motorsport Chevrolet RML, after battling with Loeb and later López.

The Argentine was in second when he missed the braking point at the first chicane in lap 8. He rejoined behind Coronel and attacked him fiercely but the Dutchman made a flawless defense of the runner-up position.

Behind the podium trio, the race was close but positions changed little, with Loeb taking fourth ahead of Monteiro, Chilton, Bennani, Tarquini, Michelisz, Morbidelli, Münnich and the three LADA cars.

Grid – The last-minute surprise is to see Valente on the grid, after Campos Racing worked all night to repair his following yesterday’s crash.

Start – Muller takes the lead despite a very good start of Loeb, who is passed by Coronel at the chicane and soon after by López.

Lap 5 – Very stable race with the two leading Citroën cars a couple of seconds ahead of a very compact group. Tarquini passes Michelisz for 8th. In TC2, Engstler leads from Filippi and Di Sabatino.

Lap 9 – Duel between Coronel and López with slight contact in the high speed section. Münnich passes Thompson for 12th.

Lap 13 – Focus is on the fight for second between Coronel and López.

Lap 15 – Nothing to do for López who his kept at bay by Coronel, while Muller wins.

Yvan Muller: “Inheriting the pole position after qualifying was certainly useful. My start wasn’t perfect, but certainly better than in Slovakia. In the first laps, I mostly focused on bringing up gently the tyre pressure, as I knew this was going to be crucial. Then, I could push and build some advantage. López came back on me very close, but then he made a mistake, so I could breath again.”

Tom Coronel: “I am very happy, it was a good race. I took a good start, I was surprised by Loeb at the first braking, as he braked earlier than expected, we had a little contact and then managed to find room to pass. I focused on not losing the streamline of the Citroën cars ahead of me, otherwise I knew it would have been difficult to keep Loeb behind. Then, I could take second again when Pechito went straight at the chicane. It was a good fight after that, but I was determined not to let him pass, and it worked out well. We are growing step by step after an awful start of the season, I am adapting to front-wheel drive and understand every day better how the car wants to be driven.”

José María López: “I did a mistake in qualifying yesterday and one in the race today, which proves that I’m not invincible! I had an amazing start of the season, and maybe that was abnormal. As the season goes on, things get more levelled, which is normal, especially when you have team mates so good and experienced. At the start, I benefitted of the incident between Loeb and Coronel, but then when I was getting closer to Yvan, I had this straight off at the chicane, I need to understand why because I didn’t push that hard on the brakes. Passing Coronel was impossible, he did a great job and we had a nice fight, and also my front tyres started to be very tired.”

Franz Engstler: “It’s a great result, and it’s nice it happened here at the Salzburgring, a very special track to me. It’s almost home race for me, as we are so close to Bavaria, and I have more than 300 guests here. I thank the team for giving me such a good car.”

Muller inherits yet another pole with Morbidelli penalized