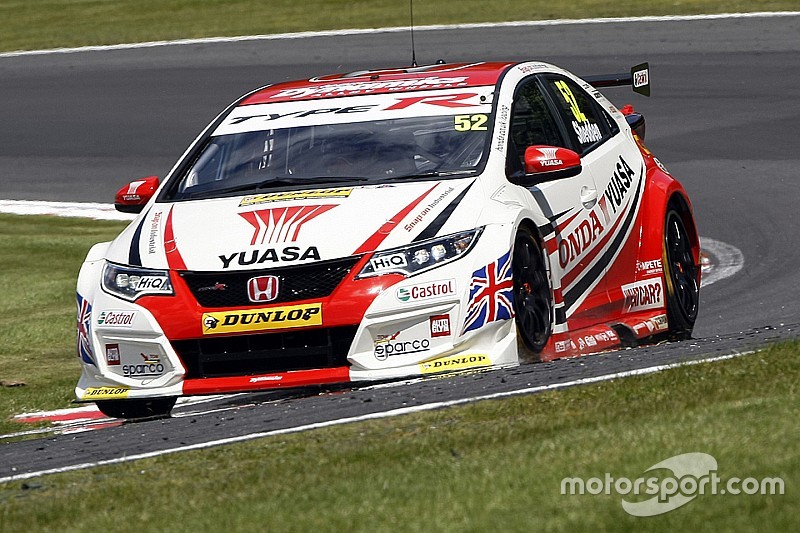 Gordon Shedden scored a popular victory on home soil at Knockhill as he streaked away at the front of the field in the second race at the Scottish circuit.

Most drivers stick to their grid slots going in to Duffus Dip for the first time in an incident-free start, and it wasn't long before Shedden was right on the rear bumper of Mat Jackson's Ford Focus, making his move at Clark's on lap five and streaking away at the head of the field.

Behind Shedden, the battle for second saw Jackson have his rear view mirrors filled with Rob Austin, who was desperately trying to force his way through, which in turn allowed the race one winner Rob Collard to join in the fun.

The three enjoyed a thrilling battle for second before the Safety Car was brought out for the stricken Stewart Lines at the hairpin.

There was a worrying moment for Jackson when contact was made with Austin at the hairpin just as the safety car was deployed, as his Ford Focus looked to have sustained some damage, causing bodywork to rub on his right-rear tyre.

Once the safety car pulled back in, Shedden resumed his charge at the front while the Jackson-Austin duel resumed. In his desperation, Austin carried slightly too much speed into the chicane and went wide, allowing Collard, Andrew Jordan and Andy Priaulx to get past.

Austin was unable to work his way back through the field, having to settle for sixth at the flag.

Collard then reeled in Jackson once again, passing the Ford on lap 25 of the race, which had been extended to 27 laps as a result of the Safety Car.

Jason Plato, who started from eighth after sacrificing his race one result to try and get a better grid spot in race two, finished seventh, with Matt Neal, Aiden Moffat and Adam Morgan rounding out the top 10.

There was a hit to the championship challenges of both Colin Turkington and Sam Tordoff. The former retired on lap 10, while Tordoff got caught up in some early race contact, forcing him to pit and end the race in 22nd, five laps behind race winner Shedden.