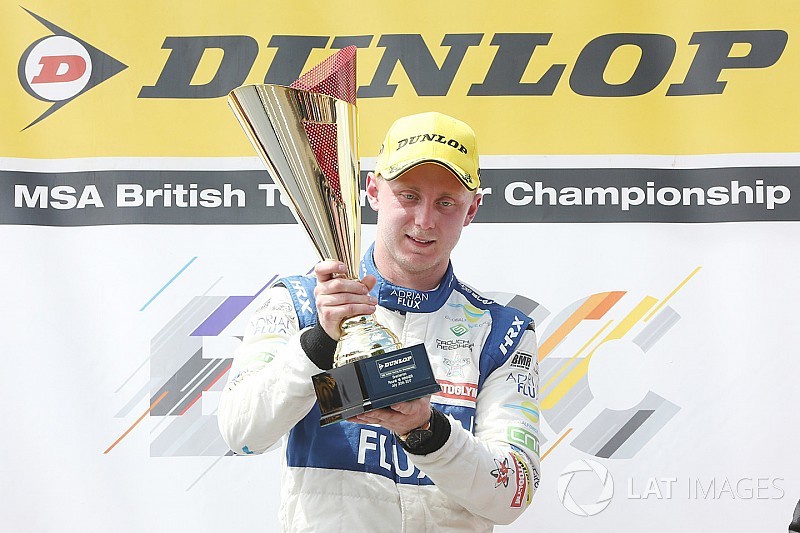 Factory Team BMR Subaru driver Ash Sutton claimed his third win of the BTCC season in Race 1 at Snetterton after a penultimate-lap pass on Jack Goff.

WSR BMW driver Colin Turkington had stormed into the lead at the start of the race from the outside of the front row, with Eurotech Honda man Goff holding second from Sutton.

The top three gradually eased away from the chasing pack – led by Honda’s Matt Neal – in the early laps, with Turkington setting the fastest lap on the third tour as he built a small margin over Goff.

But Turkington put a wheel on the grass on the approach to the Bomb Hole at half distance and spun, forfeiting the lead and dropping to the tail end of the top 10.

That left Goff and Sutton in a clear first and second, with Sutton in the rear-wheel drive Subaru whittling down Goff’s advantage in the final laps.

Sutton was half a second behind as the pair started the penultimate lap, but caught Goff through the first sequence of corners and nudged the Honda at the Agostini left-hander before sneaking up the inside on the run to Hamilton to snatch the lead.

He pulled away from there and crossed the line 2.332s clear of Goff, with victory hauling him to within two points of the championship lead.

Goff still clinched a comfortable second, with the factory Honda of Neal completing the podium.

Neal – who was concerned before the race about his chances of staying with the frontrunners – held a pack of cars including the Speedworks Motorsport Toyota of Tom Ingram, Rob Austin and Adam Morgan up at the start but found himself in a comfortable third in the second half of the race as all three dropped out of the fight and Turkington spun.

But Neal was then quickly caught by the WSR BMW of Andrew Jordan and a resurgent Jason Plato in his Subaru Levorg, and spent the last few laps defending from the pair.

Neal made a small error onto the Bentley straight on the final lap but just held on to clinch third ahead of Jordan and Plato.

Jake Hill drove a clean race to claim a strong sixth in his Volkswagen, with Turkington recovering to seventh.

Ingram’s hopes of a first podium since the Thruxton round in early May were ended when he and the Handy Motorsport Toyota of Austin collided at Agostini after a late lunge from Austin.

Austin retired to the pits with a broken front-right wheel, while Ingram recovered to eighth.

Championship leader Gordon Shedden’s reached as high as eighth on his climb through the order from a lowly 21st on the grid, but the factory Honda driver ended up 13th after a tangle on the final lap with Aiden Moffat.