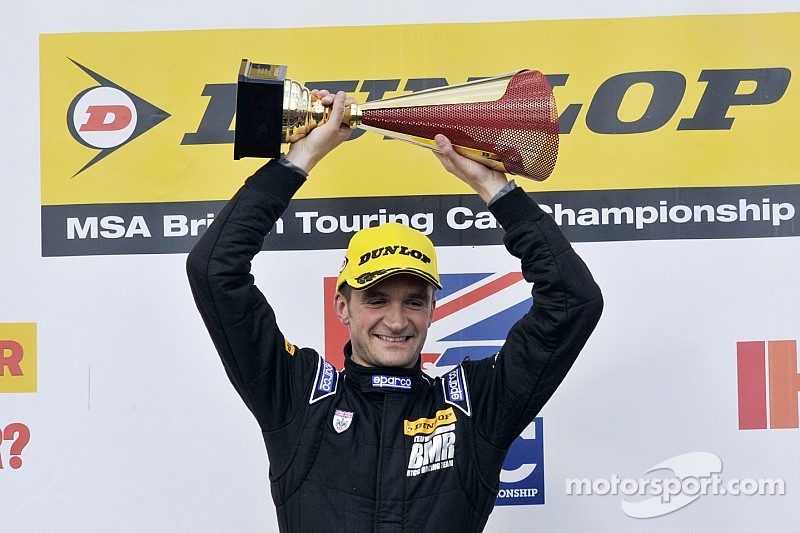 A commanding drive from Colin Turkington gave Team BMR back-to-back wins in the second BTCC race at Donington, as Matt Neal and Adam Morgan completed the podium after surviving an entertaining scrap.

From second on a grid determined by fastest laps from the day’s opening race, Turkington, carrying 57kg of success ballast, wasted no time in seizing the advantage from poleman Gordon Shedden.

The pair made light contact as they came through Redgate, with Turkington’s Volkswagen edging clear on the run down the Old Hairpin to take the lead as Triple Eight MG driver Andrew Jordan snuck around the outside of Shedden’s Honda Civic Type R into second.

An early Safety Car period, caused by the car of BMR team boss Warren Scott getting stuck in the gravel after being hit Alex Martin’s Ford, bunched up the pack, but Turkington judged the restart to perfection as Jordan was left to fend off Shedden and Morgan’s Mercedes.

Jordan was able to hang on initially on his soft tyres, as Shedden – also on softs but carrying 66kg of ballast – began a steady descent through the field, his Honda teammate Neal going in the opposite direction from his starting slot of seventh.

But Jordan’s rubber also soon began to deteriorate, and he dropped behind both Morgan and Neal exiting Coppice with a handful of laps left, only to repass as Neal attempted a forceful move on Morgan at the chicane that cost both drivers time.

As the Mercedes driver ran wide, Neal was then able to make his pass on Jordan stick for second at Redgate, before proceeding to halve the impressive 5.7 second gap Turkington had built at the head of the field in the closing laps, falling 2.5s short at the chequered flag.

Jordan meanwhile fell back into the clutches of Morgan and Rob Collard’s West Surrey Racing BMW, the MG cutting across the gravel at the chicane as the battle for the final podium place came to a head.

While Morgan managed to make his move into third stick, Jordan managed to cling on to fourth as Collard lost out to the ballast-laden BMR VW of race one winner Plato as a result of the botched move and had to settle for sixth.

Josh Cook meanwhile battled his way through to seventh place, missing out on denying Collard sixth by a wafer-thin margin of 0.009s.

Eighth place went to Jack Goff’s MG, which had run in the leading group early on only to drop back as the race wore on, with the BMWs of Sam Tordoff and Andy Priaulx completing the top 10 finishers.

Having been a non-starter in race one, BMR’s Aron Smith fought his way from 29th and last on the grid to finish 12th behind Dave Newsham’s Chevrolet, while Shedden had to be content with 14th place as he struggled with a toxic combination of soft tyres and his considerable ballast.

In the reverse grid draw, Cook's finishing position of seventh was drawn, giving the Jack Sears Trophy runner pole for the final race of the day ahead of Collard and Plato.