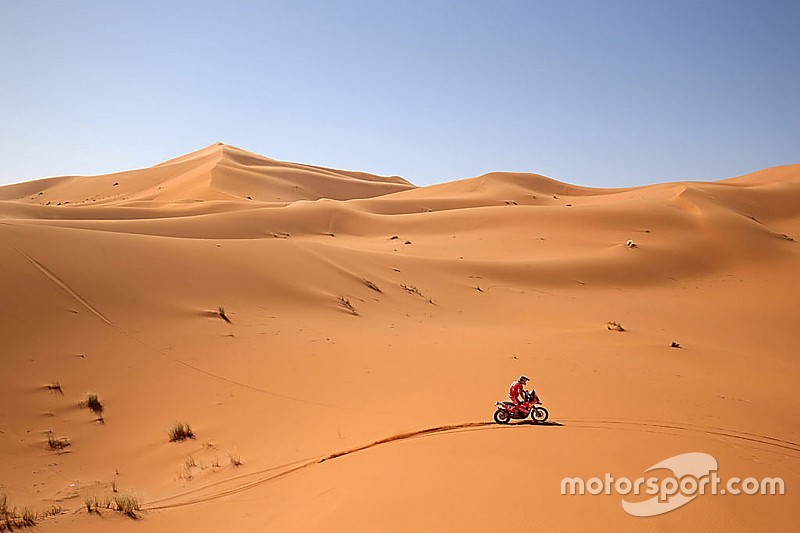 Oriol Mena scored his first victory on the penultimate stage on his first attempt at the Merzouga Rally in Morocco.

The Spanish Gervall Team Honda enduro rider scored his win on the second part of the Marathon stage on the way to Erfoud. Meanwhile, Xavier de Soultrait close to overall victory after Gerard Farres struck problems with his gearbox.

Mena, a four-time Spanish Enduro and six-time domestic Cross-Country champion, told Motorsport.com at the finish line: “I think I do not have to do these results yet, but today the cards were aligned and I have been able to win that is the most important thing.

“I'm super happy and super satisfied, in fact I still do not think I've won the special [stage]. The other day I [finished] sixth, today first – it's a dream come true!”

He won by just seven seconds over Alessandro Botturi (Yamaha Italia) after the 206km special stage.

Overall leader de Soultrait (Yamaha) was 26 seconds behind the stage winner, but is now virtually assured of victory.

Frontrunner Farres, who started stage six minutes behind de Soultrait, suffered a gearbox issue on his KTM 450 Rally, causing him to lose another 6m36s to Yamaha’s Frenchman.

In quads, and after the retirement of Jeremias Gonzalez on Wednesday, Nicolas Cavigliasso won the stage by 4m07s over Aleksandr Maksimov to extend his massive lead.

In UTV, event leader Conrad Rautenbach won by 8m25 over Santi Navarro with Frederic Henricy a further 5s back.

On Friday, the Merzouga Rally concludes with a stage with Le Touquet style – with every rider starting in a big line – in the dunes of Erg Chebbi of 50 km.