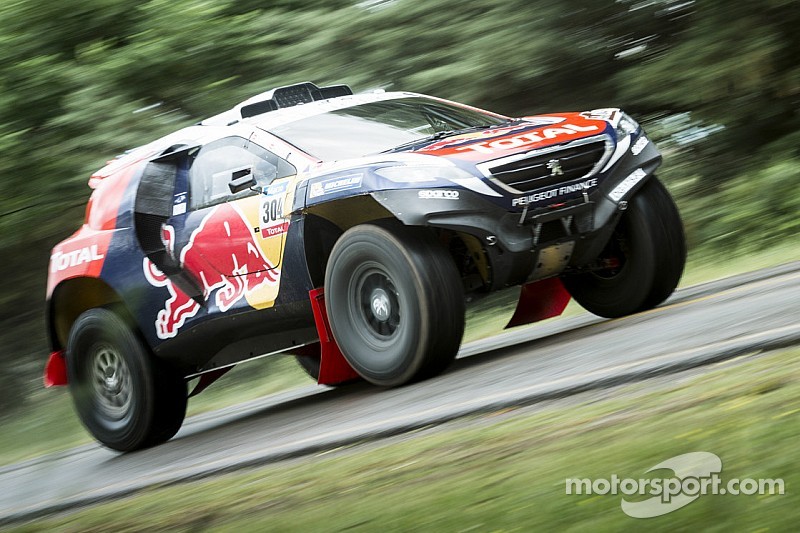 The new year is off to a flying start with the engineered acoustics of the Peugeot 2008 DKR ready to echo through South America.

A successful shakedown exercise was completed following transportation of the cars to Argentina and all pre-race technical scrutineering checks have been passed. Now Team Peugeot-Total sit on the start-line of the 2015 Dakar Rally ready to race the 9,000km of perilous terrain that comprises the world’s toughest rally.

After months of hard work including December’s rigorous testing in Morocco the three race cars were placed on a boat and shipped to Argentina. As the team were reunited with the vehicles in Buenos Aires the tireless efforts recommenced as they set about configuring the cars into race mode.

The objective of the latest test was to finalise the settings on the cars belonging to Stéphane Peterhansel/Jean-Paul Cottret, Carlos Sainz/Lucas Cruz and Cyril Despres/Gilles Picard ahead of the first special stage of the Dakar on Sunday, January 4.

As an early introduction to the unpredictable nature of this two-week rally the team’s initial plans for a final test were hampered by torrential rainfall in the Argentinian capital. The original site for the shakedown had been an offroad track 30km outside Buenos Aires, but when the team arrived to find the location flooded an alternative was quickly sourced.

Carlos Sainz: "... everything was working fine.”

“This has been the first time at the Dakar that I have done a shakedown on tarmac, but that was the only option we had because of recent rainfall,” admitted former champion Carlos Sainz. “We were able to come up with a solution that allowed us to test the car and I’m happy that everything was working fine.”

A new challenge for everyone

Stéphane Peterhansel has successfully risen to the occasion to win the Dakar 11 times and he once again demonstrated coolness under pressure to put his car through its paces before passing it over to the race authorities for pre-race scrutineering checks. “We have such a great team dedicated to looking after our car,” said Stéphane. “And it’s awesome to see the excitement everyone is feeling for this new challenge.”

Cyril Despres has been infectious

The enthusiasm of car race newcomer Cyril Despres has been infectious since the team’s arrival in South America as he continues he take onboard advice about getting the maximum out of his machine. “The next time I will be in the car will be in Buenos Aires for the podium presentation,” said Cyril. “And then we race the first special stage.”

Team principal Bruno Famin was encouraged to see his entire crew of drivers, co-drivers, mechanics and engineers step up to the challenge and complete all assignments scheduled for the days before the first stage. “That's it, here we are. The entire team has made huge efforts in these last weeks to be ready for this day. I'm proud of what the team has accomplished till now," said Bruno. “We now face the first stage. And we will consider the others stage after stage.”

With all three PEUGEOT 2008 DKRs tuned up to race the first special stage between Buenos Aires and Villa Carlos Paz on Sunday the team's preparations are complete. The opening stage will see the cars depart at 7:42am local time to travel a total of 833km, of which 170km will be the timed special stage.