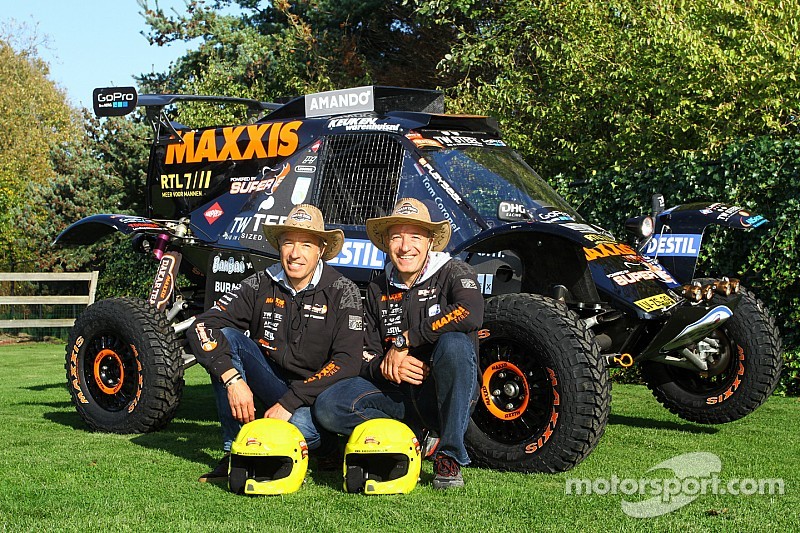 WTCC driver swops his WTCC racer for a desert buggy, from track racing to sand dunes.

Huizen (The Netherlands) – The 2015 edition of Le Dakar will not welcome one, but two Coronels at the start. Both will be driving identical buggies that have been developed, prepared and built by the Coronel team in the Netherlands. Tim is aiming at only one or two objectives: to win the buggy category and to finish as high as possible in the general ranking. His twin brother Tom has a totally different role.

Of course he also wants to steer his buggy to the finish in Buenos Aires, but at the same time he will take on a role as TV host for RTL Television from the heart of the rally, mingling with the competitors. "When I see an interesting item for a TV report, I will even stop," says Tom. Tom's TV reports will be broadcasted every day during the rally. A unique TV registration approach, a first in Le Dakar.

The 2015 edition of Le Dakar will be more challenging than ever before. "They announce that every year, but the Dakar Rally is always very heavy, it can't be any heavier," says Tim, team leader of the Maxxis Dakarteam powered by SuperB. The rally will visit Argentina, Chili and Bolivia and will present the competitors 2,350 demanding special stage kilometres during 13 days of competition.

One of the challenges will be the fact that after one marathon stage no service teams or mechanics will be allowed in the bivouac and that the competitors have to service and repair their vehicles themselves. New this edition for the cars and the trucks.

For Tim Coronel it will be his 8th participation in Le Dakar. The oldest of the Cornel-twins: "It will again be a great and challenging adventure and I am really looking forward to the rally. I praise the fact that the cars and trucks will also go to Bolivia this time. The salt flats there are of course pure magic. This year the route was covered with stones for more than 70% but I expect there will be more sand in January."

Tim's response to the marathon stage: "I think this will be an additional challenge. It will be tense because you have to take care of your vehicle, and make sure it keeps on running. But I also have experience with the technical side of the buggy, since I was closely involved in the development and construction of the buggy. You have to control yourself, especially in the marathon stage. If you go flat out you will most probably end up with some serious problems."

Start and finish of Le Dakar will be in Buenos Aires and Tim Coronel is already enjoying himself. "Buenos Aires is a fantastic city and the people there are really mad and excited about the rally and cheer very loudly when the competitors are passing by. Everybody remembers the TV images from some years ago when they were even blocking the road. It's so unique!" And with his familiar, wide smile: "And of course we will party after rally. I hope Tom and I can celebrate successes."

In the 2014 edition Tim experienced a DNF. "The technology let me down and it was too far from the finish to push the buggy across the line, hahaha. In 2015 I will give my 110% again."

"This was once and never again," were the famous words of Tom Coronel in 2009, completely covered in dust. In 2009 he joined his brother Tim in a Bowler for the Dakar Rally in Argentina and Chili. It looked liked the twins had to give up during the 5th special stage, but fortunately that one was neutralized. With a time penalty of 200 hours they could continue the Dakar Rally, be it without any chance to finish high in the ranking. Their best result was in the 12th special stage when they finished 11th overall. In 2014 Tom is competing with a Chevrolet Cruze of ROAL Motorsport in the FIA World Touring Car Championship (WTCC), where he is one of the front runners.

"Yes, my buggy is improving every year," says Tim Coronel in the special workshop of the Maxxis Dakarteam powered by SuperB. In the workshop the buggies are built by the service team. "From the tubular frame to the engine and gearbox, we do everything ourselves. And for the 2015 edition of Le Dakar the buggy is further improved since we make more use of kevlar-titanium to lower the vehicle weight with 75 kilo. Less weight means more speed. The Suzuki Hayabusa power unit now delivers 224 ps, while we are also testing a 260 ps version. Our seating position has also been improved.

Very important are the tires. Maxxis has developed special tires for the Dakar buggy, stronger and lighter. "Last year I didn't have a single puncture, except one when I forgot to pull off the hand brake," says Tim. "Even Al-Attiyah was surprised that I kept on going without flats and he came to me to inform about the Maxxis tires. For us they are the best you can get and I am very pleased with the cooperation with Maxxis.

Lessons from a world-class professor