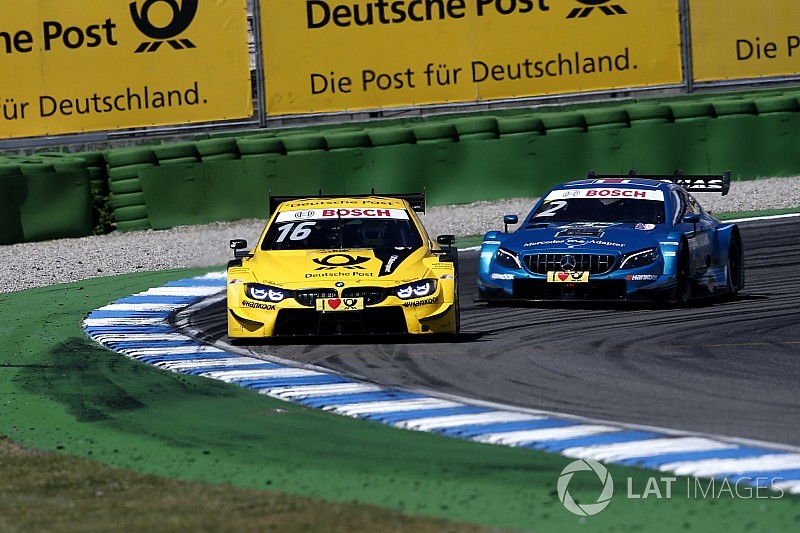 Timo Glock said he had planned his expletive radio call urging Mercedes to consider its DTM future a lap before he celebrated his victory in the second race at Hockenheim.

BMW driver Glock had a breathtaking battle with Mercedes driver Gary Paffett through most of the race following his pitstop.

After finally dispatching his long-term rival, Glock crossed the line and immediately took to the radio to say: “The best f**king racing.

"F**king hell Mercedes, this is why you should not leave this championship, you f**king idiots.”

Glock told Motorsport.com that he felt entitled to call out Mercedes because it was his personal view on the matter.

“I say all the time that I will never hold back with my emotions and what I think,” he said. “When I crossed the line I had already prepared a lap before when I realised I was safe.

“I said ‘OK, I need to get this message out,’ because this is DTM and this is what it is all about.

“This is the racing we wanted to show and finally we managed it and it’s the wrong time to pull out. That’s my personal view and I can say this on the radio anyway I want.

“If Mercedes says a different opinion, they can say it. But that’s my opinion and I’m allowed to say that, I’m 36-years-old, so I don’t need to ask anyone [for permission].

Mercedes DTM boss Ulrich Fritz told Motorsport.com that it was “great” to hear his emotional message.

“It’s nice to hear that they value us as their competitors and as sportsmen,” he said.

“I mean, I also have to say to Timo that from the start he has always been a sportsman, pushing, and it’s great to hear something from this.

“But if this changes anything [regarding Mercedes’ future], I would doubt it.”

When Fritz’s comments were put to Glock, he said: “Yeah, that’s good. Now they need to go to Stuttgart and change their minds.”

Wehrlein surprised by his speed on DTM return

No Turkish champagne for underage Vettel