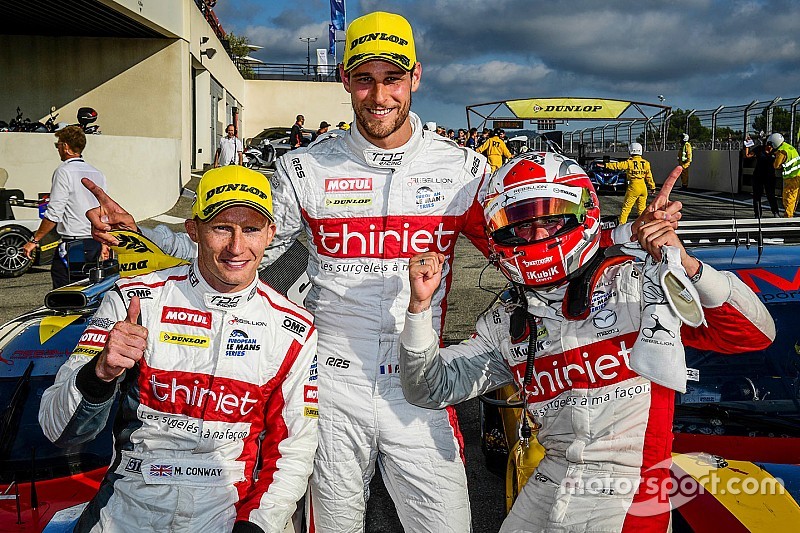 Thiriet by TDS Racing has taken the lead of the European Le Mans Series points standings with a third successive race victory at Paul Ricard.

The #46 Oreca 05-Nissan of Pierre Thiriet and Mathias Beche and WEC regular Mike Conway led the race from pole position, with Conway establishing a 15 second buffer over the rest of the field in the first stint.

Behind, Harry Tincknell scythed through the field in the #38 G-Drive Gibson, jumping from ninth to second in the first hour of the race.

SMP Racing’s Andreas Wirth was also on a charge in the early stages, passing the #21 DragonSpeed Oreca to move up to third place.

Up front, Thiriet by TDS continued to lead the race, taking advantage of a Full Course Yellow - the second of the day - to make its second pitstop and extend its lead to over a minute.

The French outfit went on to secure a comfortable victory - with Conway winning on his ELMS debut - dethroning G-Drive from the lead of the standings.

Meanwhile, the #32 SMP Racing entry managed to pass the #38 G-Drive in the pits to finish second, the Russian squad securing its first podium finish since the season-opener at Silverstone.

Nicolas Lapierre catapulted the #21 DragonSpeed machine back into third place after a quick final stint, taking the final spot on the podium from the Eurasia Motorsport outfit.

The #32 crew was reduced to just two drivers (Tristan Gommendy and Nick de Bruijn) after Pu Jinjin crashed on Friday and took no further part during the weekend.

The G-Drive Gibson was eventually classified fifth, after Giedo van der Garde gave away two positions in quick succession in the final 20 minutes of the race.

In the LMP3 class, the #9 Graff trio of Eric Trouillet, Paul Petit and and Enzo Guibbert took home victory, with the #19 Duqueine Engineering squad finishing second.

The championship-leading United Autosports entry of Alex Brundle, Michael Guasch and Christian England was classified third, after suffering from lack of straight-line speed early in the race.

The #26 Tockwith Motorsport car spun in the final hour while running in second, with an unscheduled pit stop dropping it further down the order.

The #99 Aston Martin Vantage made it two different manufacturers on the GTE podium as Porsche again struggled to keep up to pace with its rivals.

United Autosports to the fore once more in ELMS