The Oreca 05 LM P2 already in the lead for its race debut! 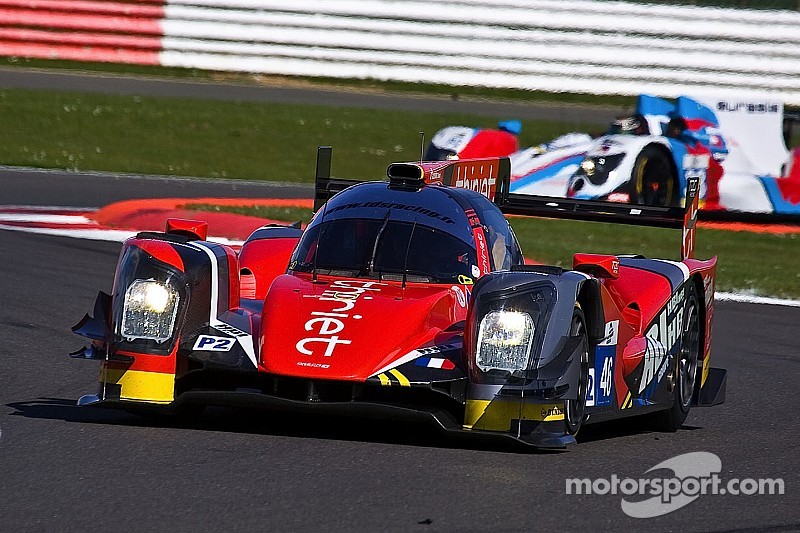 At the front of two races at this week-end, the latest prototype designed by Oreca Technology has shown its best.

Forty days after its very first run, the new Oreca 05 LM P2 was making its debut in competition this week-end, in Silverstone, as part of both the European le Mans Series and the FIA World Endurance Championship. At the front of each of the two races, the latest prototype designed by Oreca Technology has shown its best. Actually, the Oreca 05, in the lead, was in a good position to win the 4 Hours of Silverstone on Saturday, before being hit at the end of the race. Thiriet by TDS Racing claimed a podium anyway ! On the following day, KCMG finished the 6 Hours of Silverstone at the 5th place of the LM P2 class.

The Oreca 05 has not delivered its full potential yet

Still a very young car, the Oreca 05 LM P2 had to pit against some impressive contenders in England: Gibson, Morgan and the Oreca 03R (its precursor) in the ELMS ; Dome, Ligier and Alpine in the FIA WEC. Having come out of the Signes’s workshops, the new car has proved to be worthy of such a challenge. Six years after the first success of an Oreca chassis in endurance – the Oreca 01 in Silverstone – it nearly clinched a first achievement on its first race, only five minutes away to be very precise.

On Saturday, after having posted the third lap time of the qualifying, the Oreca 05 entered by the French squad Thiriet by TDS Racing lead the race from the beginning of the last hour up until four laps before the finish line ! It is only because of a contact with the future winning car that the team was prevented from a success, only four laps away from the chequered flag.

On Sunday, after having started from the third row, the Oreca 05 entered by Asian team KCMG was in the lead at the beginning of the race. In third place throughout most of the stint, it eventually had to slow down because of a cooler problem. A youth issue which did not prevent the car from showing parts of its potential.

“The overall outcome regarding the Oreca 05’s debut is positive" says Oreca Group’s CEO Hugues de Chaunac. “The aim was not to consider this first week-end as a full-scale test but rather to allow the two teams to score some important points in the quest for the title. Considering how young the car is and how competitive the race was, it clearly wasn’t an easy mission, but it has been partly successful. In the ELMS, Thiriet by TDS Racing has shown a glimpse of the car’s potential, with a perfect reliability and a good level of competitiveness. It was only due to race circumstances that the team and the Oreca 05 were not able to claim a first win.

"In the FIA WEC, KCMG was keeping up with the race before a mechanical youth issue occurred. It’s a pity but we will quickly draw lessons from those experiences.

“This week-end confirms that the Oreca 05 is well born. It has not delivered its full potential yet because everybody – not only the teams but also our manufacturer department – is still in a learning phase. There’s certainly room for improvement. All of this is part of the normal process of development of a new-born car. We’re expecting a lot of this prototype and, with what we’ve just seen in Silverstone, ambitions for the next rounds to come are clear: to win ! In fact we’re going to work on it, starting tomorrow.”

A first podium in the European Le Mans Series

2012 ELMS champion and 2013 runner-up with the Oreca 03, Thiriet by TDS Racing put the No. 46 Oreca 05, competing for the first time, right at the front of the race. Third in the qualifying, the Hérault-based team lead the 4 Hours of Silverstone despite having lost thirty seconds during a driver change and another ten seconds in a spin caused by a contact with an LM P3. The end of the race was cruel for the Thiriet/Gommendy/Badey trio : while the car was in first position, the No. 41 Gibson hit it, five minutes away from the chequered flag.The three men were sill rewarded with the third step on the podium.

“Our race was trouble less in terms of reliability and that’s a very positive point” explains Thiriet TDS Racing’s Director Xavier Combet. “The new Oreca 05 has got some potential, but at the moment we’re lacking experience and perspective to operate it. We have to think about that for the next round. In sporting terms, first of all there was this regrettable contact with a LM P3. Despite that, we were fighting for the first place before Jon Lancaster attacked Tristan and ended up hitting his car. The marks on it prove that it was his fault.

That’s not Le Mans’s spirit and that’s a shame to finish on that note. There’re four rounds left and we’ve scored some good points. The team’s strategy was right and it’s quite a positive thing anyway to begin with a podium considering that it’s a brand new car. We’ve won in GTC with both the pole and the best lap time. That’s good.”

Eurasia Motorsport’s Oreca 03R crossed the finish line in fifth position, in front of AF Corse’s and Ibanez Racing’s. While occupying the fourth row, Irish team Murphy Prototype unfortunately had to pull out.

Third of the 2014 LM P2 Trophy with three wins, KCMG’s crew Bradley/Howson/Tandy began the season by achieving a third place of the qualifying session. The Asian squad quickly moved up to the first position as the race started, before occupying the second and third places during the first stint. Then the No. 47 Oreca 05 had to deal with a cooler problem as well as with a one-minute penalty for a pit-lane infraction. Racing at a good pace, as their fastest lap less than five hundredths away from the best lap time shows, KCMG crossed the finish line in 5th position of the LM P2 class.

ELMS champion, the Alpine A450b, also designed and manufactured by Oreca, had to withdraw after twenty laps due to an accident.

The FIA World Endurance Championship’s next round will take place in Spa-Francorchamps on May 2nd. The second round of the European Le Mans Series is scheduled on May 17th in Imola.