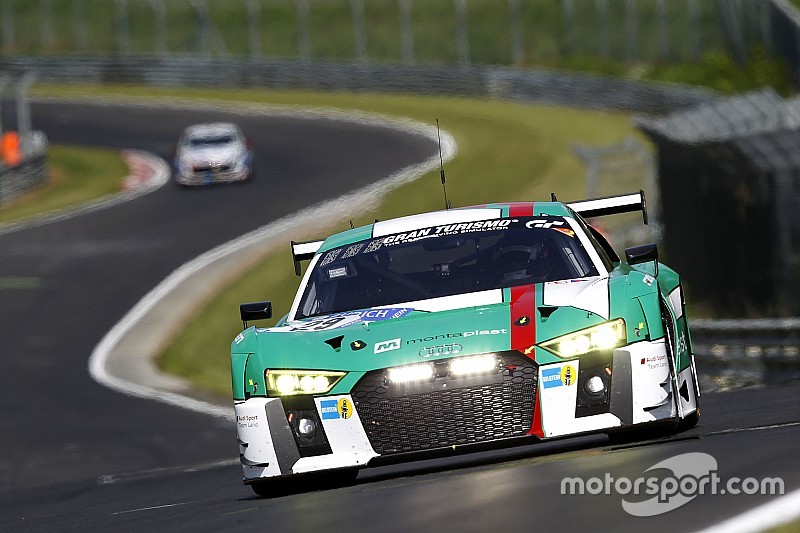 The #29 Land Motorsport Audi is in command of the 2017 Nurburgring 24 Hours at the six-hour mark after several of its rivals hit trouble during the opening stages of the race.

Heading into the night, the #29 Audi of Connor de Phillippi, Christopher Mies, Markus Winkelhock and Kelvin van der Linde leads the race after 40 laps with an advantage of 58 seconds on the #9 WRT Audi of Robin Frijns, Rene Rast, Marcel Fassler and Nico Muller.

The #98 ROWE Racing BMW of Markus Palttala, Nicky Catsburg, Alexander Sims and Richard Westbrook follows in third, but is already two minutes down on the leaders.

In fourth is the #22 WTM Racing Ferrari, with defending Nurburgring champions in the #1 Black Falcon Mercedes close behind in fifth.

However, a lot of outfits hit trouble in the early hours of the race, among them the pole sitting #704 Glickenhaus, which got collected in an accident during a 'Code 60' slow zone.

The #44 Falken Porsche with Jorg Bergmeister at the helm faced a similar fate when it too collided with a rival during a yellow flag part of the track at Kesselchen.

After five hours Audi had also lost its #10 WRT car after Muller - who is pulling double duty - had a coming together with a backmarker and had crashed hard into the wall at Quiddelbacher Hohe.

Half an hour later, the #5 Phoenix Porsche with Dennis Busch spun at Schedenkreuz and damaged its left-rear, but managed to slowly get back to the pits, losing the tyre thread in the process.

While the #47 HTP Mercedes was withdrawn from the race after six hours due to excessive damage to the front-end of the car, the #8 Haribo Mercedes collected a 3m32s stop-and-go penalty for ignoring flags while on track.

The lead has changed 11 times during the first quarter of the race, with Audi occupying P1 most of the time and only handing it to its rivals during the out-of-sync pitstops at 8 lap intervals.

Canadians Spengler and Wittmer are teammates at the Nürburgring