Alex Albon says he was forced to fight Formula 1 championship leader Lewis Hamilton during the latter stages of the 2019 German Grand Prix, and it ultimately cost him several positions. 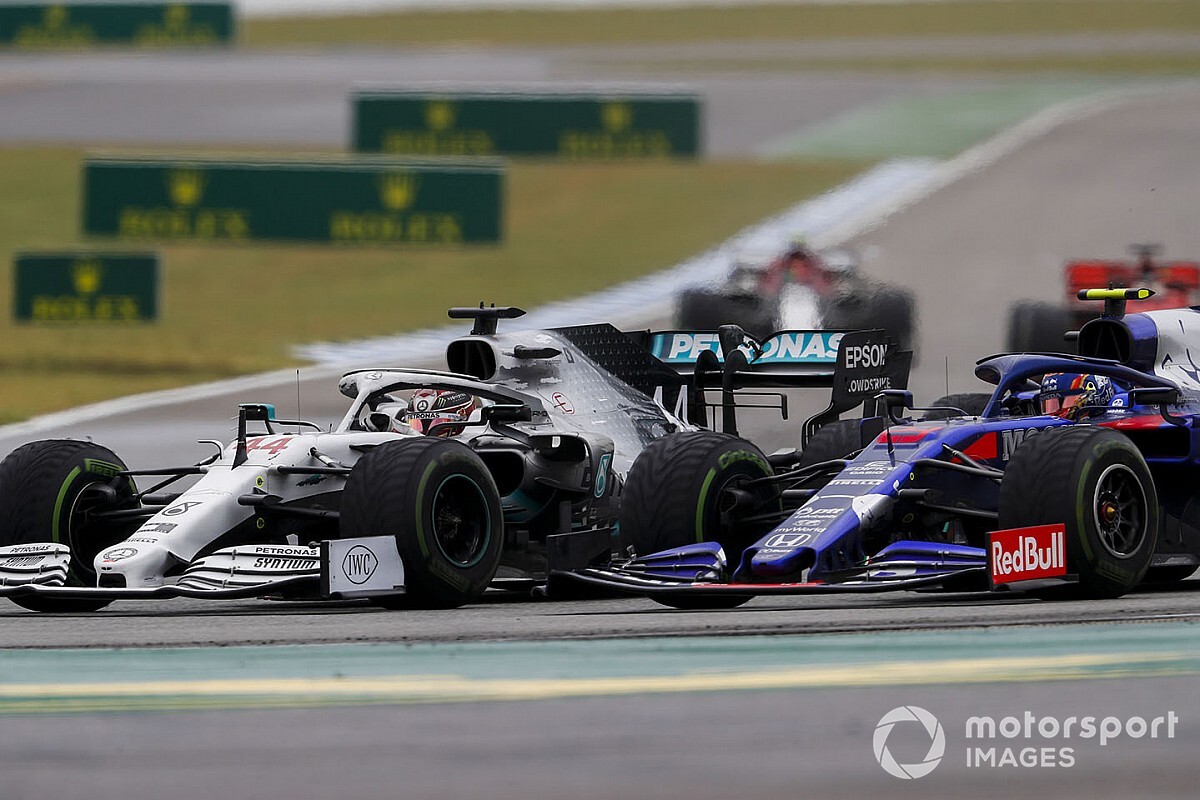 The Toro Rosso driver stayed out of trouble during the chaotic middle part of the race to run fifth, which became fourth when Renault’s Nico Hulkenberg spun off on lap 40 of 64, bringing out the safety car.

At that point Albon was nearly 10 seconds behind third-placed Hamilton, but the caution period brought them together, and also enabled the McLaren of Carlos Sainz to close onto Albon’s tail.

Hamilton had reported that his tyres were in poor condition, but Mercedes viewed a pitstop as an action of last resort since the world champion would have to serve a five-second penalty for an earlier infraction.

It was therefore make-or-break time for Albon when the race restarted.

"To be running fifth for most of the race - and it was a genuine fifth - I think our pace was really where we were,” he said.

“Actually, the first thing that put us out of play was that I was almost forced to fight with Lewis. I didn’t really want to, but he made a mistake and I thought, ‘OK, he’s not really in my race,’ and I was more worried about Carlos behind.

“But I was like, ‘OK, here we go, we’re going to end up battling.’ And I lost a couple of positions there.”

Albon capitalised on a slip by Hamilton at Turn 3 immediately after the restart to get a run on the Mercedes down to the hairpin, but couldn’t make the move stick and lost out to Sainz and Alfa Romeo’s Antonio Giovinazzi.

“I didn’t want to overtake him [Hamilton] but I was kind of caught in a position where I had to try it,” said Albon.

“And we lost a bit of ground and the guys on better tyres undercut us quite severely.”

Racing Point’s Lance Stroll pitted from 14th place for slicks a lap before the end of the full-course caution period, while Albon’s teammate Daniil Kvyat and the Haas of Kevin Magnussen stopped just as the safety car peeled off before the restart.

This enabled Stroll and Kvyat to run second and third behind race leader Max Verstappen once the rest of the field made their stops, and paved the way for Kvyat’s remarkable podium finish.

But it left Albon having to fight past Magnussen and defend from the other Red Bull of Pierre Gasly in the final stages, ultimately finishing sixth.

“It’s one of those things, there’s no-one to blame, it’s just - I think the guys at the back knew they could risk it, and it worked.”