The Red Bull Ring put a premium on brake performance during the Austrian Grand Prix, with teams having to do their best to make them last, as Giorgio Piola and Matt Somerfield explain.

Brake and tyre temperatures are a critical factor in the performance of a race car and something that Mercedes has focused on heavily for some time now.

For example, in the opening seven races the team raced seven different front brake inlet configurations, after Rosberg’s race was compromised by tyre debris lodged in the brake inlet in Australia.

For Austria, the team opted to completely open up the brake drum, leaving the disc and caliper exposed so that the the heat could be rejected out of the wheel face quicker but with less precision. 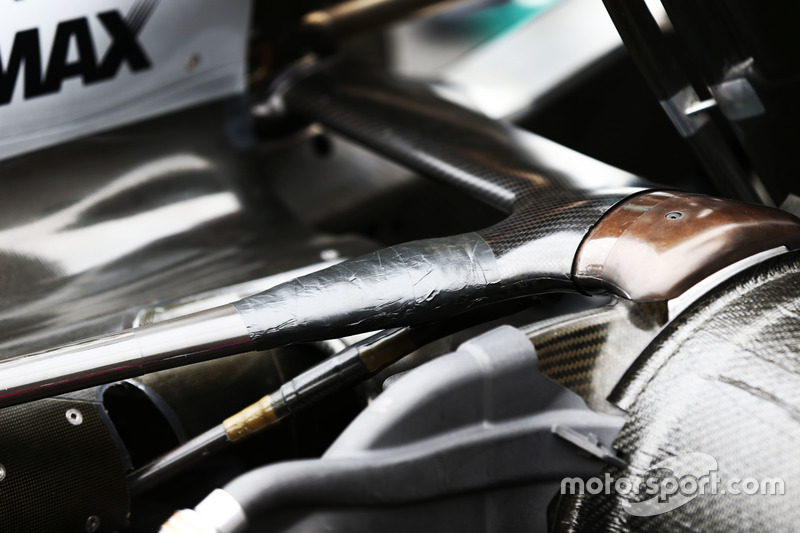 Rosberg’s suspension failure during FP3 not only put the team under a huge amount of stress to ready the car for qualifying but also led to some ad hoc changes on both cars. Carbon strengthening was placed over the wishbones where they’d previously failed and taped over, to affix them it in place.

Lost amongst the debate surrounding the last-lap crash was the fact that Rosberg’s last stint was compromised by the damage he’d sustained earlier in the race when he collected some of the tyre carcass shed from Vettel’s car.

Whilst not quite as severe as the damage sustained by Hamilton in his first-lap collision with Bottas in Bahrain, which was calculated as costing the Brit around a second a lap, this would nonetheless have had a significant impact on both laptime and tyre wear.

This likely cancelled out the delta between the supersoft Rosberg was shod with and the soft compound used by Hamilton and allowed the latter to close. 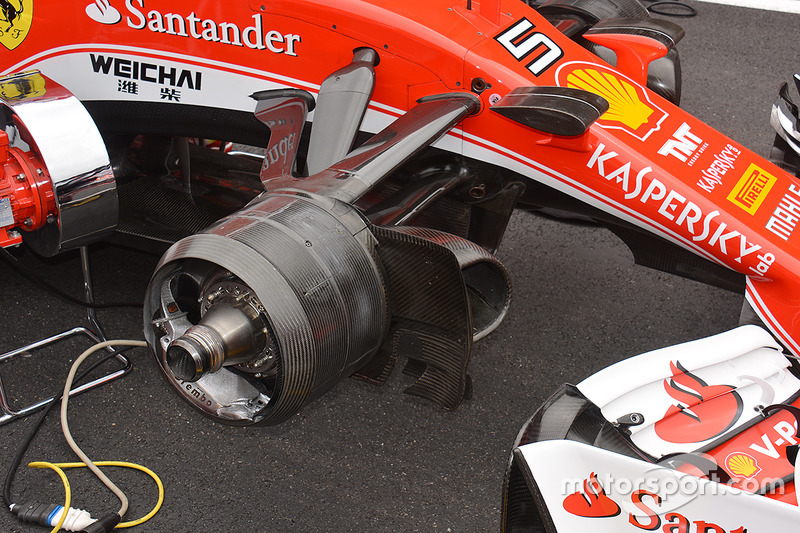 Like Mercedes, Ferrari changed tact when it came to its front brake ducts in Austria, not only because of its apprehension surrounding brake life but because of its usual tactic of heating the hubs on the grid in order to raise the tyre temperatures and pressure.

With the change of protocol for tyre pressure measurement changed, it made this trick irrelevant and so Ferrari didn’t heat the brake drum and components in the the normal way. However, the team did open up the end of the brake drum to allow the heat generated by the brakes to escape out through the wheel face more rapidly.

Ferrari has several aerodynamic updates scheduled for Silverstone, re-using many parts we’ve already seen at other circuits this season as the team looked for their optimum setup around the Red Bull Ring.

However, it did introduce an update for the internal combustion unit, spending another of its development tokens doing so. This coincided with a new fuel blend developed by Ferrari's technical partner Shell, in order to increase performance and fuel economy. 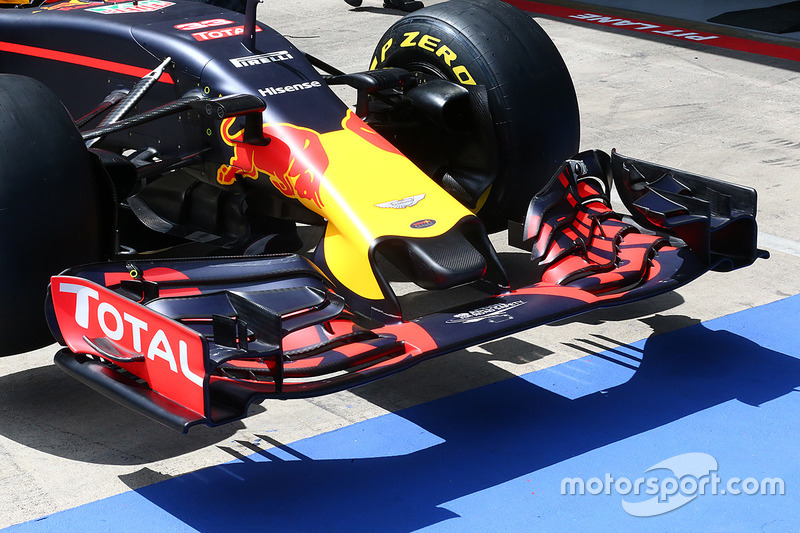 Red Bull finally admitted it had introduced its slightly shorter nose in Montreal and had run it ever since.

The difference in the nose length, which is only 15mm shorter than its predecessor, is almost imperceptible to the naked eye but will have an affect on the airflow, both allowing more air under the nose and, most importantly, changing its relationship with the ‘neutral’ section of the mainplane below it. 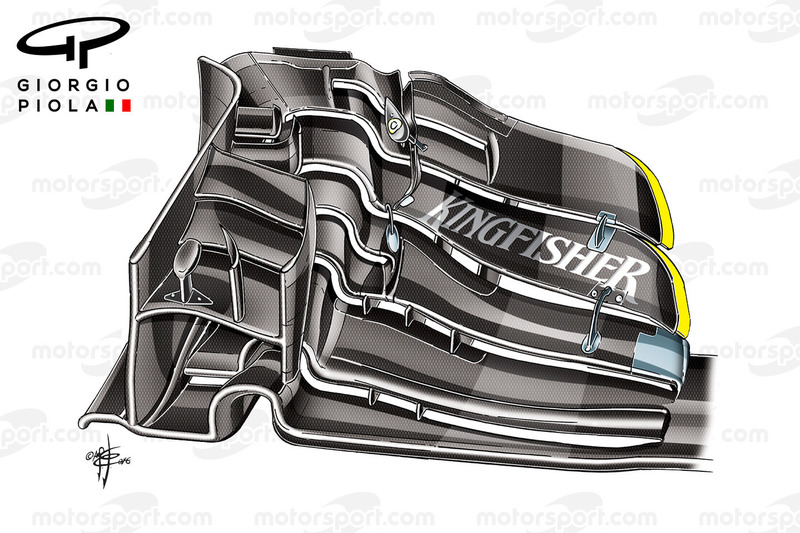 Force India’s ‘B’-spec upgrade has been a revelation since its introduction in Spain, catapulting the team toward those at the front of the grid. However, there is no time to stand still and Force India revised the front wing in Austria in order to cater for the very different circuit demands.

The two upper flaps were shortened and their tip shape changed in order to alter how they influence the Y250 vortex, which is shed from the flapped section and neutral mainplane juncture below them. The length of the flaps used previously is highlighted in yellow on the illustration above.

Interestingly, Haas, having adopted the complexity of the blown axle for its maiden season, decided to blank it off for the first time in Austria.

We’d had word that some teams, including Haas, may adopt this tactic in Baku with brake temperatures marginal given the disparity between the long straights and tight twisty second sector. 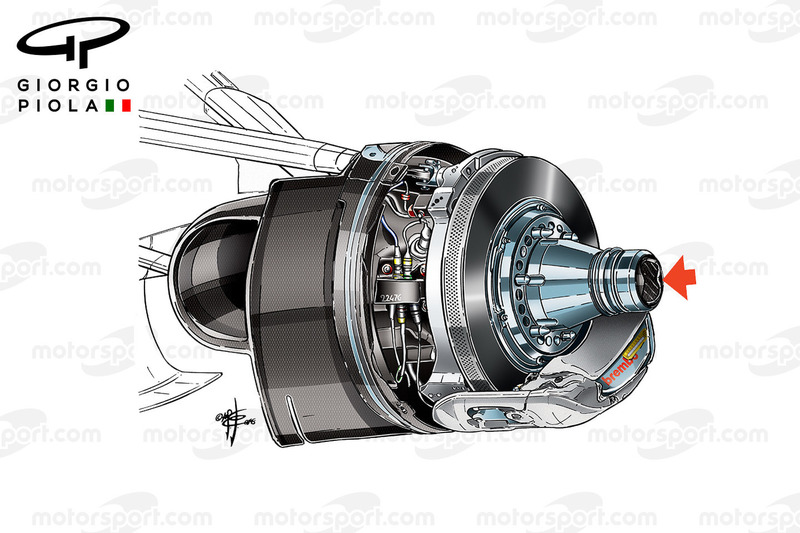 The carbon fibre insert (arrowed) prevents airflow usually collated by the main brake duct inlet and passed through the hollow axle from escaping in the usual way.

Instead, the inlet, which remains the same size, can now pass additional cool air to the brakes, assisting at a circuit that puts huge energy into the brakes and leaves little distance between them to provide respite.