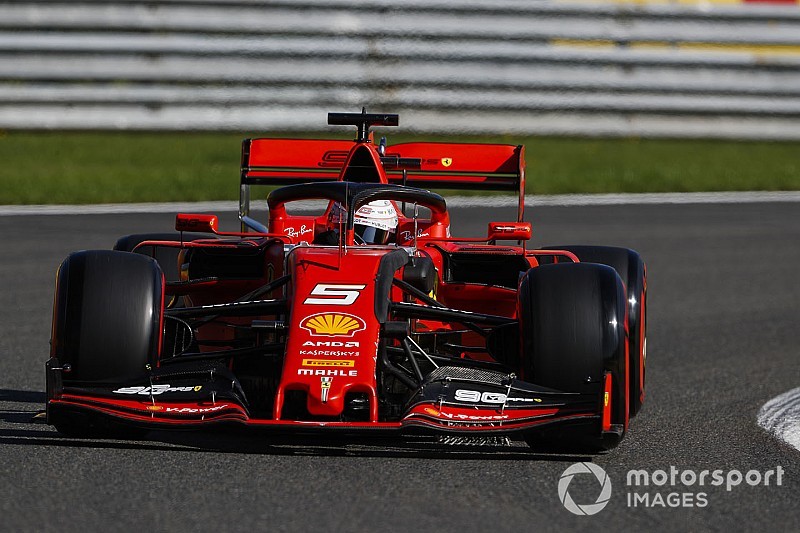 Sebastian Vettel headed a Ferrari one-two as the Formula 1 season resumed with the opening practice for the Belgian Grand Prix.

Vettel outpaced his teammate Charles Leclerc by 0.214s to top FP1 at Spa, where championship leader Lewis Hamilton had a disjointed start to his weekend.

Hamilton finished sixth fastest after a difficult session that started with a pedal problem, was further disrupted by a telemetry issue and featured some scruffy moments on his flying laps.

Ferrari has been tipped as a pre-event favourite due to the power-sensitive nature of the Spa circuit and Ferrari's car being better suit to high-speed venues.

The team ascended to the top of the times shortly after the midway point in the session, as first Leclerc knocked Max Verstappen from P1 and then Vettel set an even quicker time.

Vettel's 1m44.574s, on soft tyres, was almost a second quicker than Verstappen managed as Ferrari enjoyed a dominant start to the weekend.

Verstappen only made a modest improvement on his early benchmark, setting a 1m45.507s – less than a tenth faster than new teammate Alex Albon.

F1 rookie Albon, promoted to Red Bull in place of Pierre Gasly as of this race, spent the first part of the session getting up to speed with his new team's settings and procedures.

Albon had pledged to tune out the "noise and attention" he would get this weekend and a fastest lap of 1m45.584s gave him an encouraging start.

At the tail end of the field, his predecessor Gasly's return to Toro Rosso began with the 18th-fastest time, 3.3s off the pace – one position and three tenths behind the team's full-season driver Daniil Kvyat.

The two-by-two order at the front was completed by the Mercedes duo of Valtteri Bottas and Hamilton, who lost a lot of time early on when he reported a lack of power and slowed almost to a halt before making it back to the pits.

Recently-confirmed 2020 Mercedes driver Bottas eventually edged the intra-team battle by less than a tenth, as Hamilton suffered a wide moment at La Source and ended up slightly on the grass on the run to Pouhon after running off-track at the exit of the preceding left-hander.

They were 1.3s off the pace, but only used medium tyres to the others' softs.

Stroll used Mercedes' upgraded engine – which is being used across all six Mercedes-powered cars – to take early honours in the midfield fight ahead of Renault's Daniel Ricciardo.

Behind Gasly, Williams test driver Nicholas Latifi outpaced Robert Kubica to win their private duel for 19th – Latifi, standing in for George Russell in FP1, outpaced the pole by 0.18s.

Grosjean "quite confident" he won't be F1's odd man out