F1 having a "nightmare" with run-off areas - Grosjean

Formula 1 has been accused of putting itself in a "nightmare" position with run-off areas at circuits, although some drivers understand why Moto GP-influenced changes are being made. 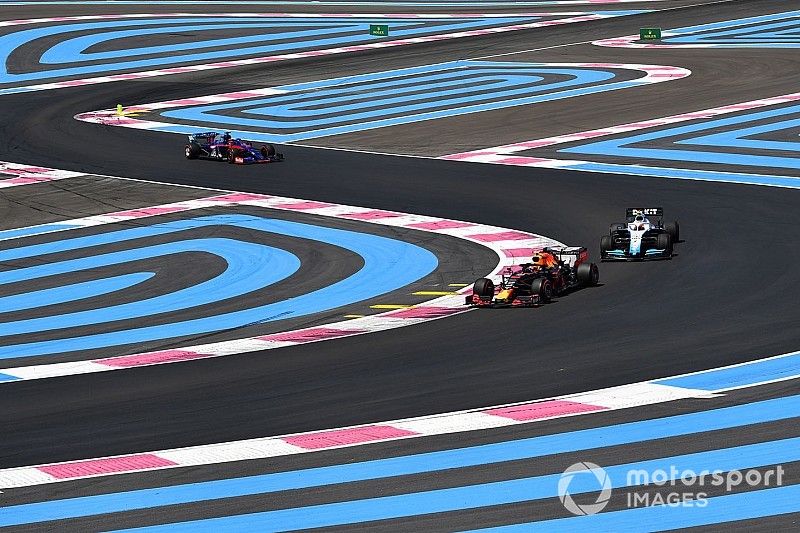 The issue of track limits has been an element of two key moments in the last two grands prix after Sebastian Vettel's controversial penalty in Canada and Daniel Ricciardo's pair of penalties in France.

Haas driver and Grand Prix Drivers' Association director Romain Grosjean said: "We're putting ourselves in a position which has become a nightmare with those circuits with run-off everywhere.

"I always say Paul Ricard, I love it, it's my home race. Two metres of grass on each side of the white line, track limits, it can become the best track in the world.

"But just because there's so much run-off, who gives a damn about going straight."

In many cases, extra run-off and certain kerb profiling has been done because circuits host MotoGP as well as F1.

One such circuit is the Red Bull Ring, home of this weekend's Austrian Grand Prix, which has had minor changes to track limits with areas of grass replaced by extended run-off.

Alfa Romeo driver Kimi Raikkonen said: "It hasn't changed an awful lot from the first times I was here.

"The first corner has changed a bit and the run-off areas, but I mean a lot of things have been done because of MotoGP and I understand why. It's already dangerous and when they hit the grass patch it's game over."

The Red Bull Ring, home of this weekend's Austrian Grand Prix, has had minor changes to track limits with areas of grass replaced by extended run-off.

At the end of the kerbs at Turn 3 at the top of the hill and beginning of the kerb at the Turn 4 right-hander, the concrete has been extended.

The same has been done at at the start of the kerbs at Turn 7 (the fast left-hander in the middle of the lap) and Turn 9 (the penultimate corner).

In addition, the run-off at Turn 4 has been reconfigured and extended, and the concrete is also extended on the left and right kerbs at Turn 8.

However, Ferrari driver Sebastian Vettel says these changes are not "relevant" to the wider track limits debate.

"Asphalt run-offs have a justification," he said. "Am I a fan of asphalt run-offs? No. The increase this year here is not relevant. I went around the track and it's not like now it gives you plenty of new opportunity to go off or go wide.

"With the asphalt run-offs there's certain difficulties, hence why I think around here we see these yellow speed bumps and quite violent kerbs.

"It's not the ideal solution but it seemed to work last year. It's a compromise that we unfortunately have to live with."

Sainz "surprised not to be happy" about McLaren pace