Lewis Hamilton has likened Ferrari's straightline speed advantage to it having a "jet mode", after he was beaten once again to pole position at the Russian Grand Prix. 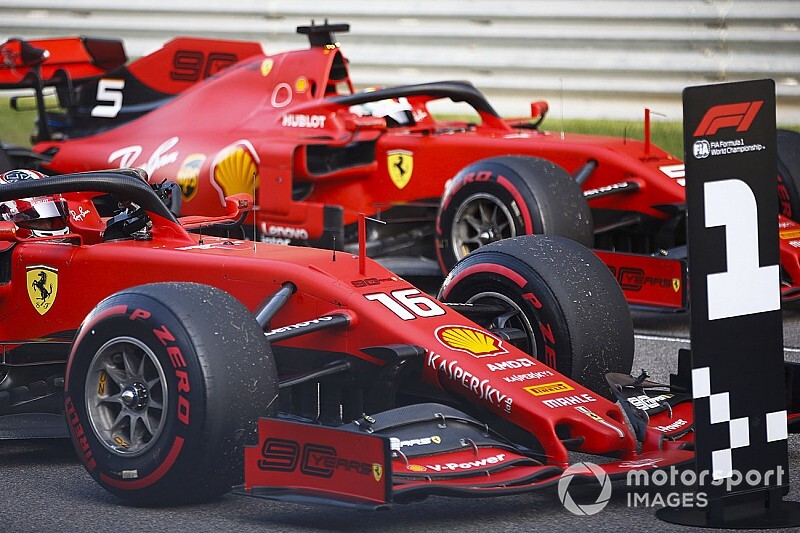 A supreme effort in the final lap of Q3 helped haul Hamilton on to the Sochi front row alongside Ferrari's Charles Leclerc, but he said his Mercedes outfit had no response to the extra power that is helping Ferrari at the moment.

"It was a tough qualifying session because these guys have some crazy speeds on the straight," said Hamilton, who famously coined the 'party mode' phrase for his own team's high-power setting.

"They go to another level. That old party mode you talk about, they have something else beyond that – jet mode.

"Nevertheless, I gave it absolutely everything I had at the end. And the team did such a great job to tinker and push forward. I am so glad it came together. I wasn't expecting to get on the front row so I am really happy with it nonetheless."

Hamilton is aware that Ferrari's strong pace so far this weekend means the Italian outfit is favourite for the win, but hopes his team's strategy to start the race on medium tyres will give it a chance of taking the fight to his rival.

"We know they are on a slightly lower drag level this weekend, plus they have that power, so we have to try something," he said.

"You see the last couple of races we were behind all the way, so we were fortunate enough to opt for another strategy.

"I think the team has done a really good job to put us in that position. It is a long way down to Turn 1, so not always the best for starts on the harder tyres.

"I am going to try to tow the life out of Charles if I get the chance. But it is going to be hard because they have got good starts as well."

Pole position man Leclerc conceded that the long run to Turn 2 meant that starting from pole was not necessarily the best place to be in Russia.

"The car felt amazing," said the Monegasque driver. "It feels great to be back on pole but I don't know if it is best track to start on pole.

"The straight is very long after the start, so tomorrow the start will be very important as always, but here probably even more because of the straight."