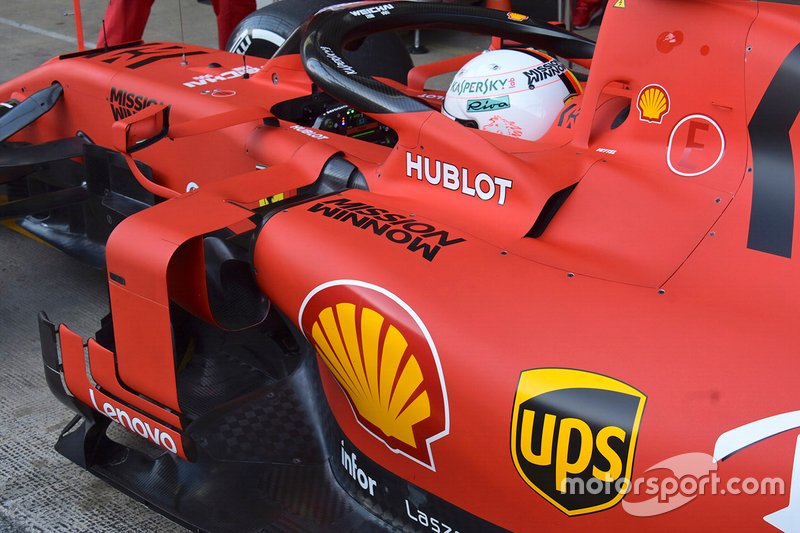 A fantastic view of the Ferrari SF90 allows us to see a multitude of details, including the slotted splitter extension, multi-element sidepod deflectors and their cockpit cooling outlet which is integrated in the bodywork that surrounds the halo. 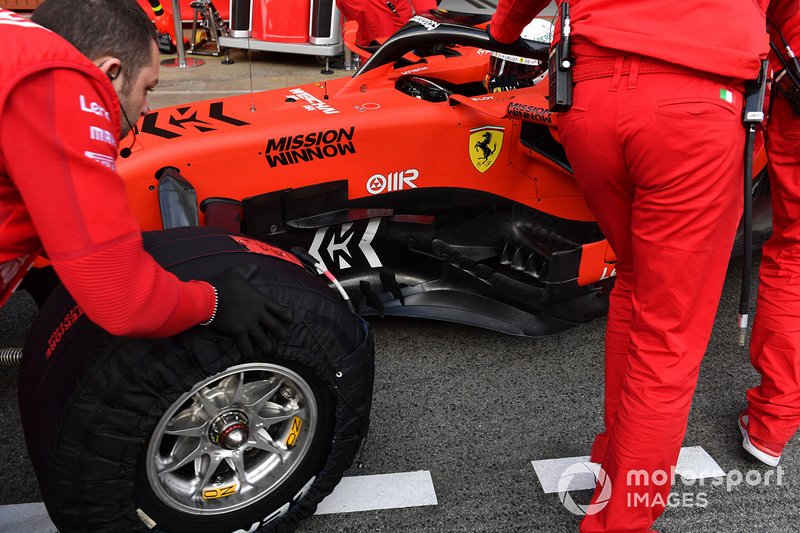 The SF90’s bargeboards feature a taller section at the front of the assembly than the rules really should allow, as the team have pinched some real estate from the chassis to make it possible, you’ll note that they also have a short boomerang midway down that surface in order to tie them in with the lower bargeboard section behind. 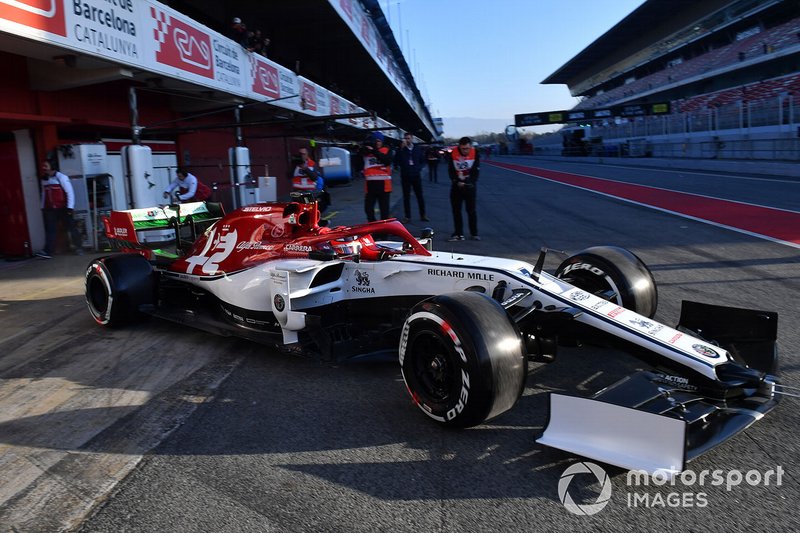 Kimi Raikkonen’s C38 features flo-viz painted on the rear wing, as the team looks to establish whether it’s operating as anticipated. 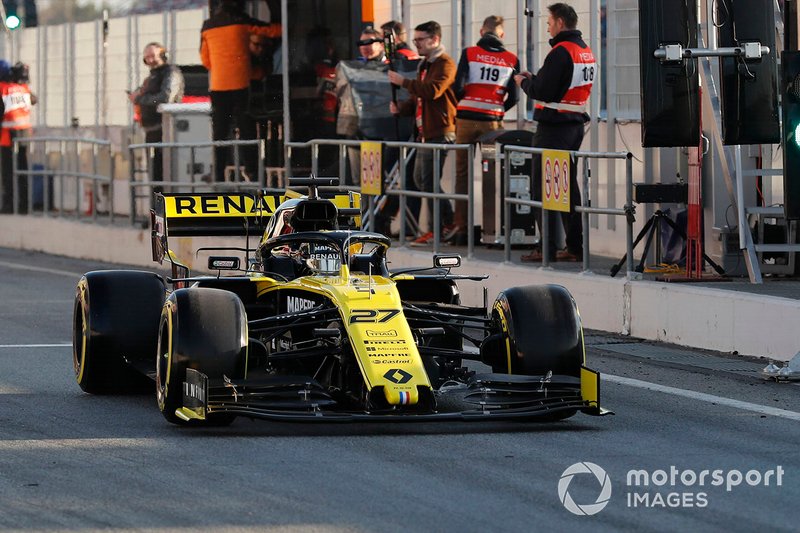 The Renault RS18 rolls down the pitlane with several new elements that were not present when the car was launched. These include new two-piece wing mirrors, a T-wing with curved down tips and displaced and straked rear wing endplates. 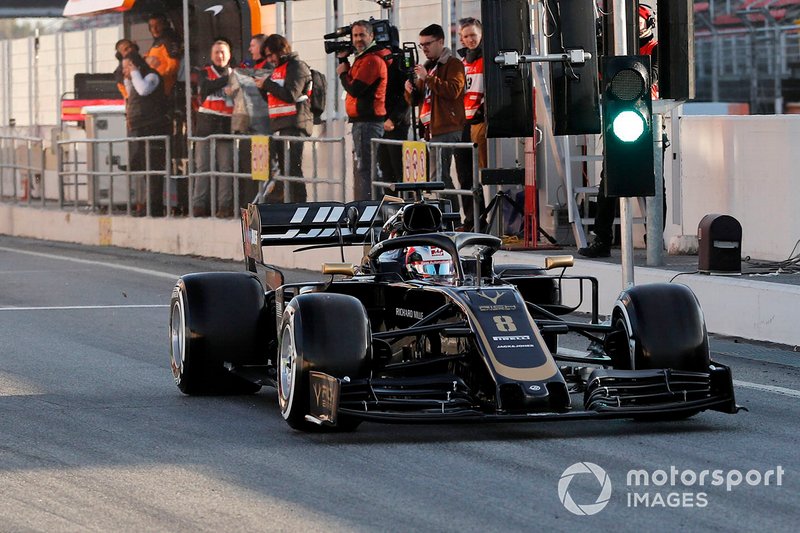 It appears that Haas had very little to hide with the renders that they released, with the VF-19 in a similar trim for the first day of the test. 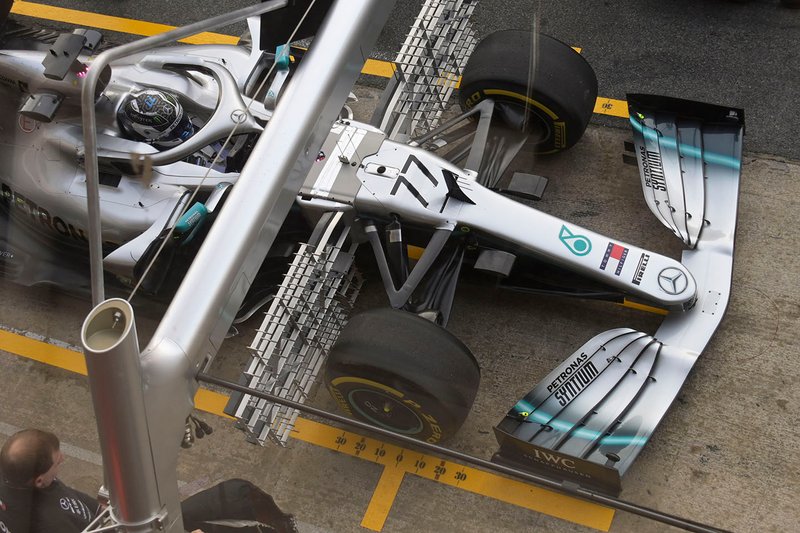 Valtteri Bottas put the Mercedes W10 through its paces in the morning session, completing 69 laps along the way. The car’s pictured here complete with kiel probe arrays mounted behind the front wheels as the team collect data that will be analysed to make sure the real world correlates with their simulation tools. 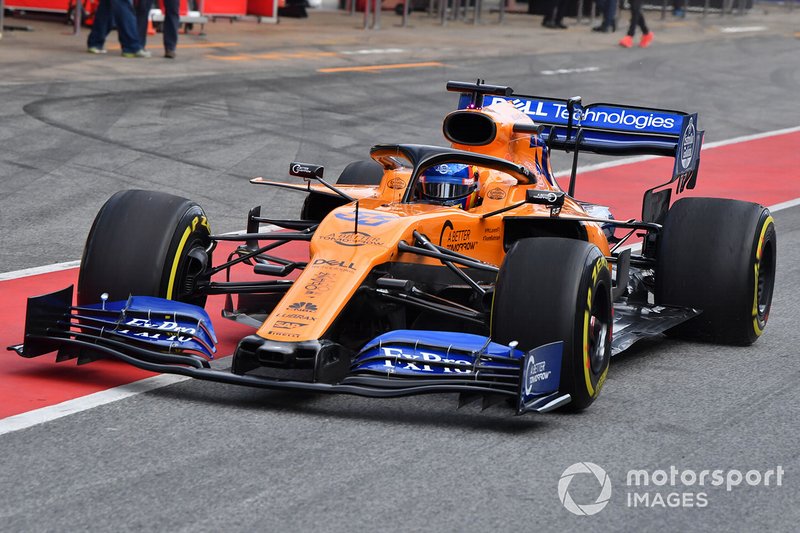 A good overview of the MCL34 which is in a similar specification to the physical launch car presented by the team. 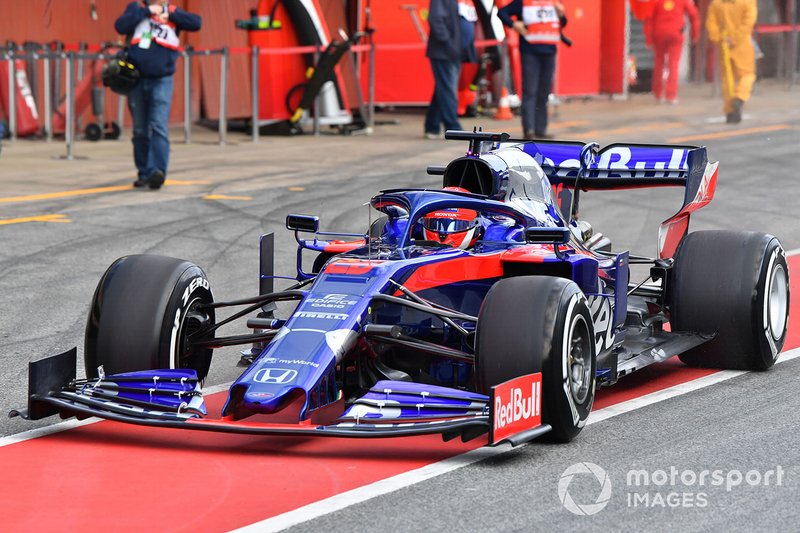 The STR14 is presented with a different look to the one shown in the launch renders, the front wing has featuring the drooped outer section seen at Ferrari and Alfa Romeo. It’s also worth pointing out their continued use of the two-piece wing mirrors which it introduced during last season. 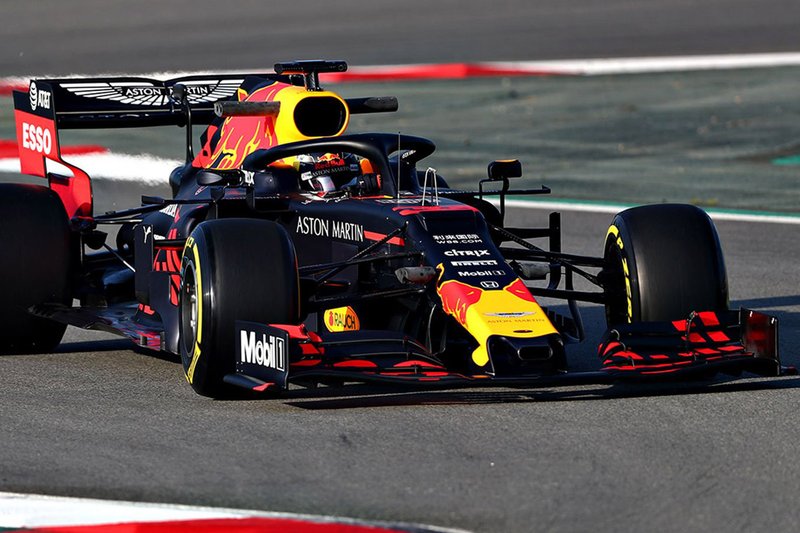 Max Verstappen at the wheel of the RB15 which is clearly running the level of rake we’re used to seeing from Red Bull. Also worth noting that the team are running chequered reference points on the front wing, whilst a hi-speed camera captures footage in order that they understand the amount of deflection it undergoes throughout the course of a lap. 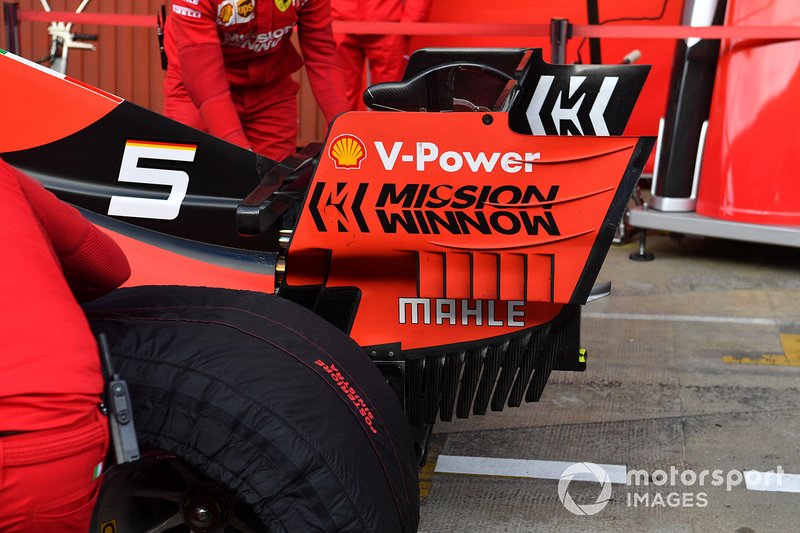 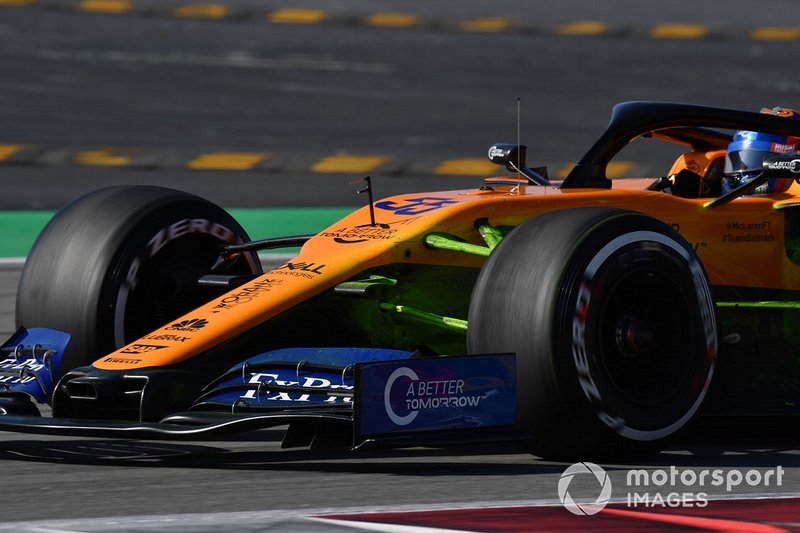 Carlos Sainz at the wheel of the McLaren MCL34 which had been painted with flo-viz paint around the front suspension in order to evaluate the flow characteristics and make sure the front end is performing as anticipated. 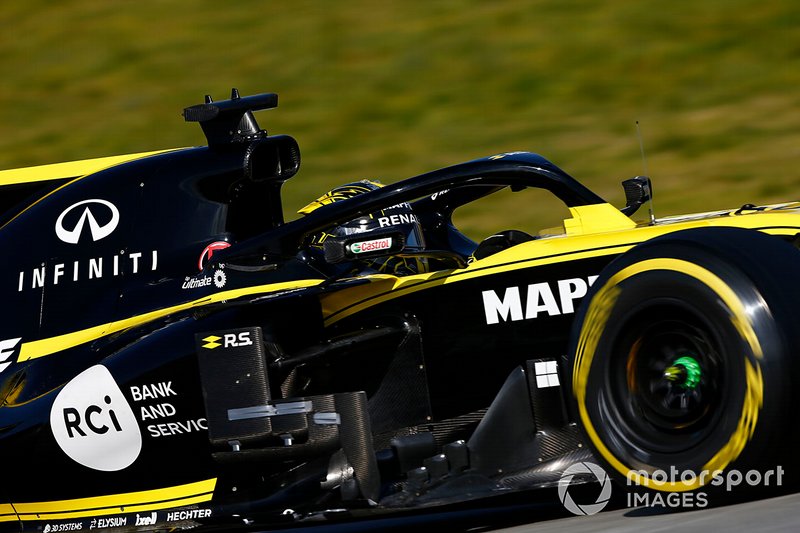 A look at the midriff of the Renault RS19 which now features the almost universally used periscope-style sidepods. Also note the new sidepod deflectors which are vastly different to the ones shown on the launch car. 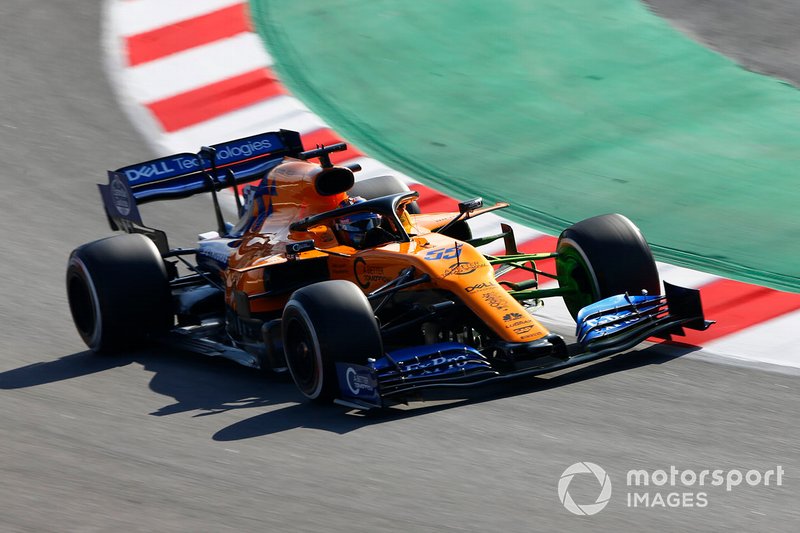 Another look at the flo-viz paint on the front end of the McLaren MCL34. 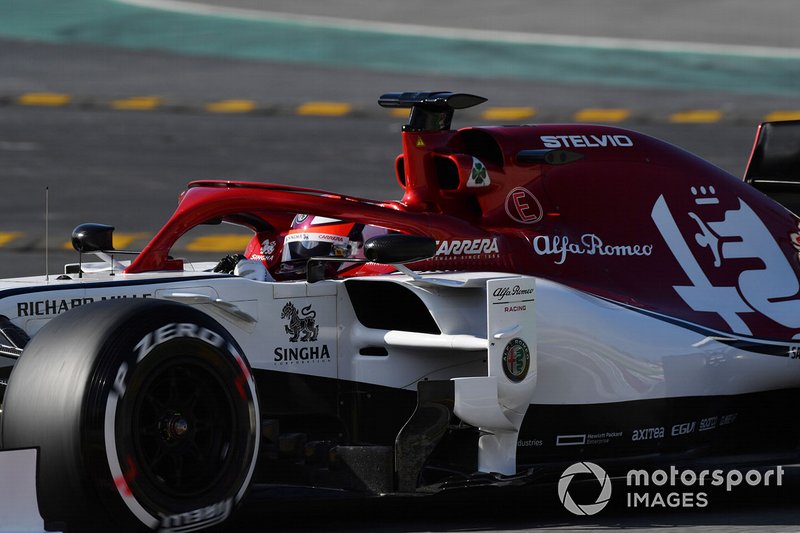 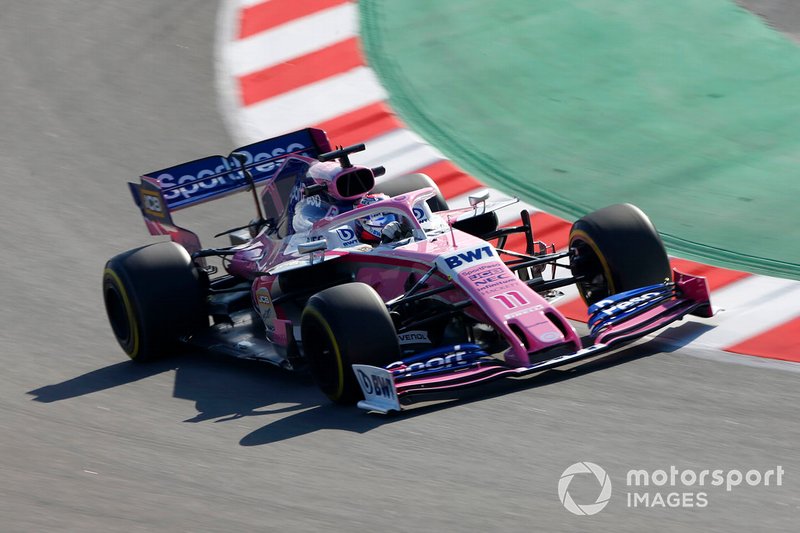 The RP19 is using in a fairly low-key aerodynamic configuration for the first test as the team continue to press on with their race one spec back at the factory. 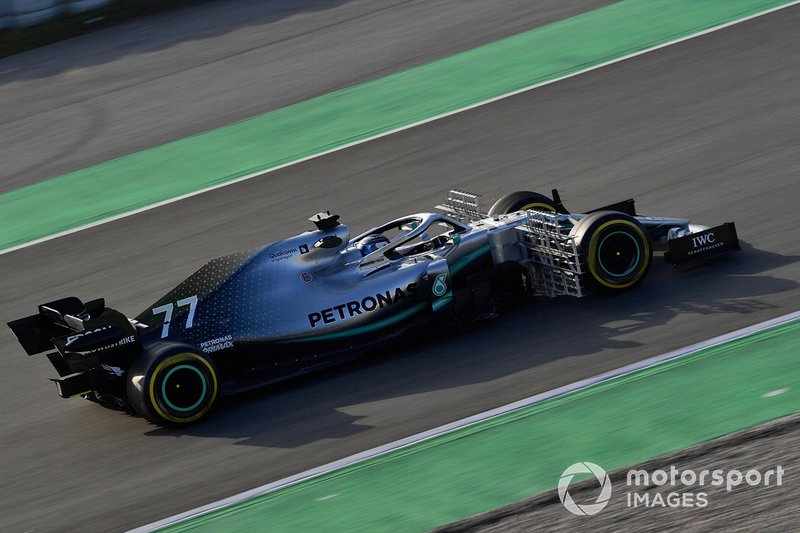 Bottas at the wheel of the Mercedes W10 with a pair of kiel probe arrays mounted behind the front wheels in order that the team may study the wake disturbance being created. 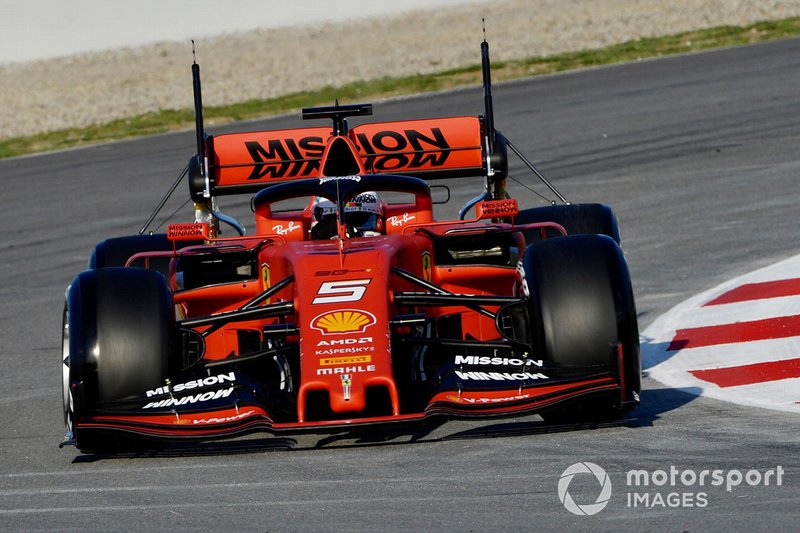 Sebastian Vettel was at the wheel of the Ferrari SF90 on day one of the test and went out with a rather large pair of kiel probe arrays mounted behind the rear wheel. However, the team also mounted a pair of stanchions atop the rear wing complete with pitot tubes on them too. 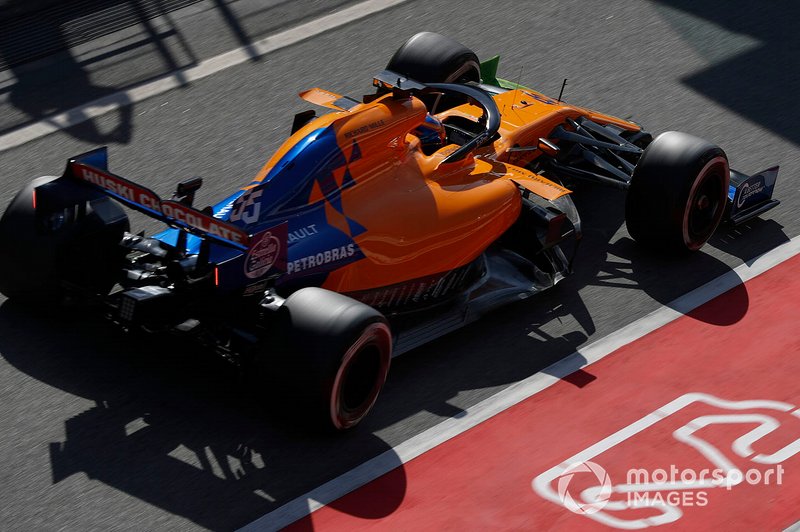 This three-quarter rearward view shows just how much of an undercut exists on the McLaren MCL34’s sidepod this year. 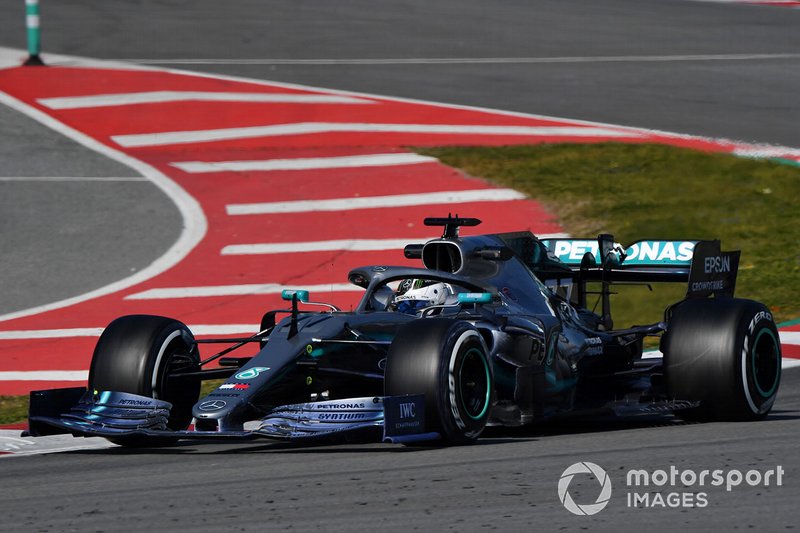 Mercedes sprayed flo-viz paint on the W10’s front wing during the morning session, whilst a row of pitot tubes were also mounted on the floor ahead of the rear tyre as the team looked to capture as much data as possible. 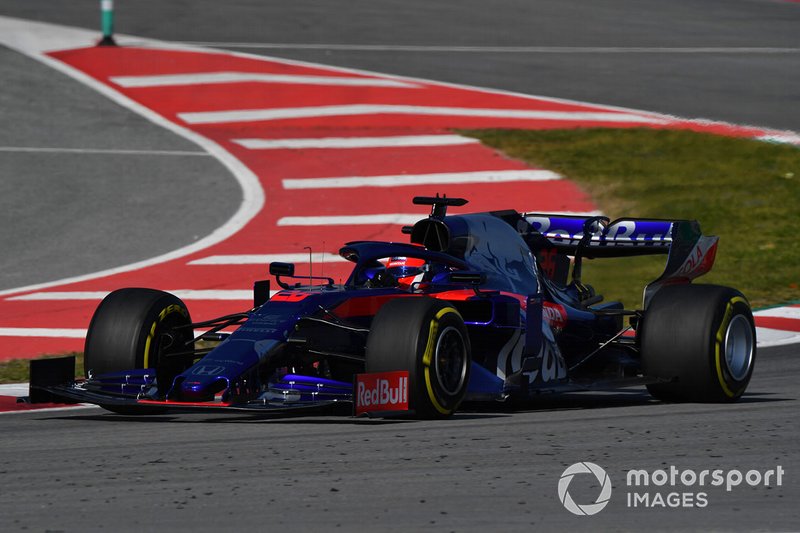 Toro Rosso kept an eye on temperatures at the rear of the car as we can temperature stickers on the side of the rear wing mounting pillar, through which the exhaust runs. 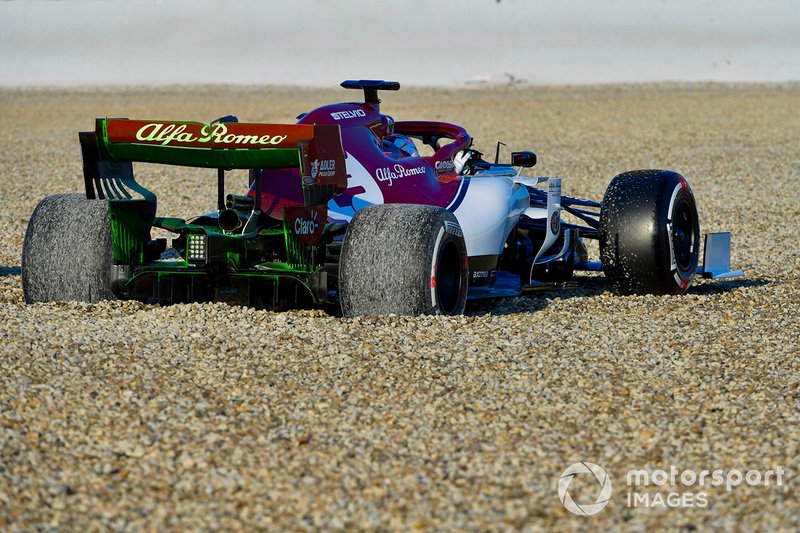 Kimi Raikkonen’s early running in the C38 was bought to a halt when he ended up in the gravel trap, we can see here that the team was looking to capture imagery of the flow over the rear of the car, having painted it in flo-viz. 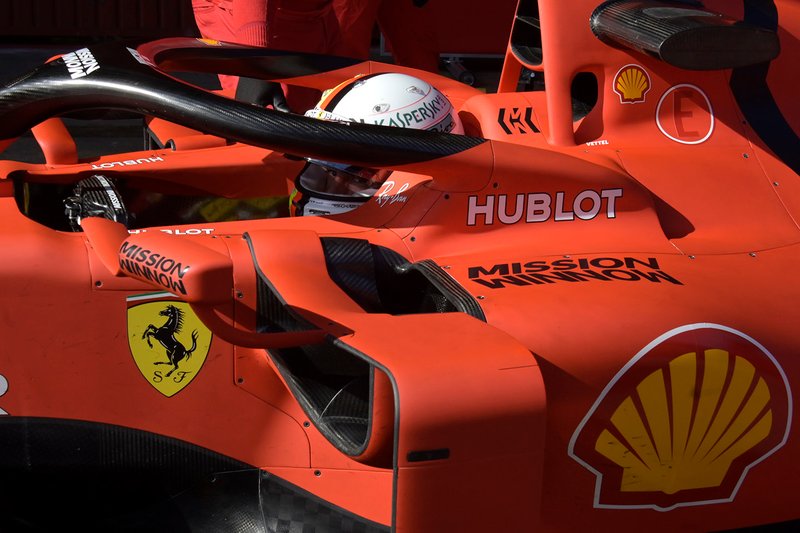 A look across at Ferrari’s sidepod solution, which sees a horizontal slat mounted in front of the high sidepod inlet 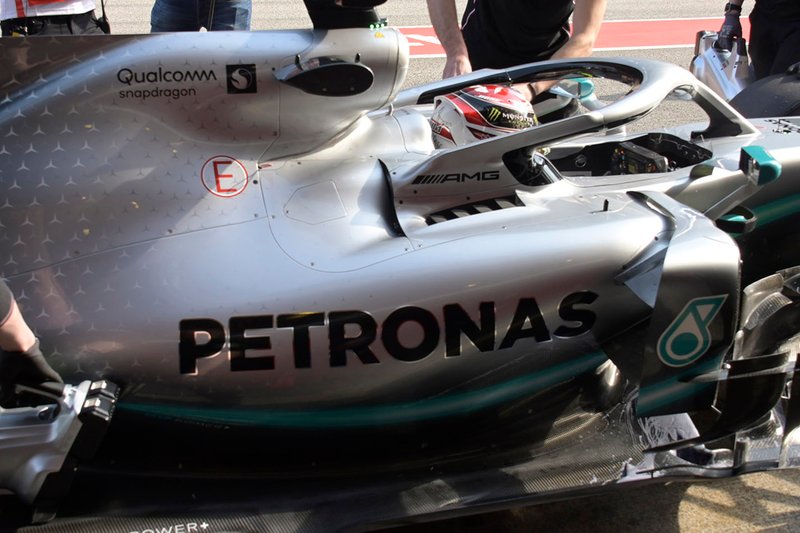 A look at the Mercedes W10’s sidepods and the cooling panel and exit which flanks the cockpit. 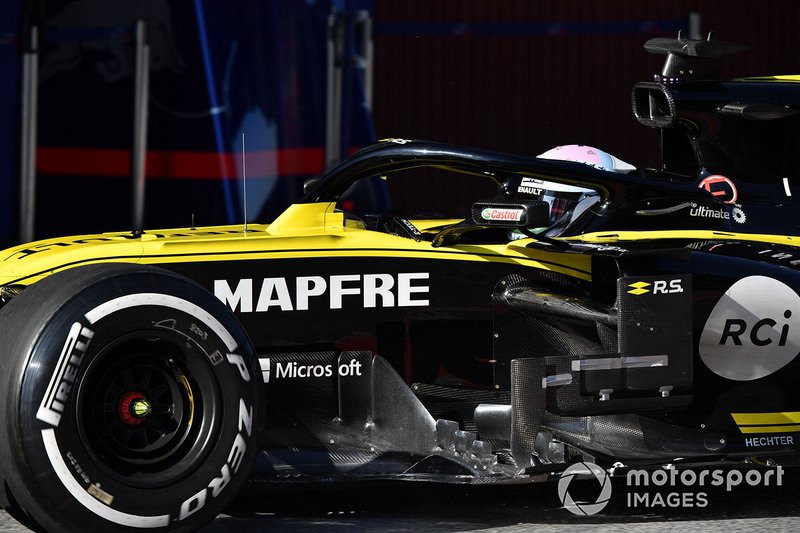 A nice view of Renault’s front wheel design, which features several rims within that help to control how the airflow is emitted from them. 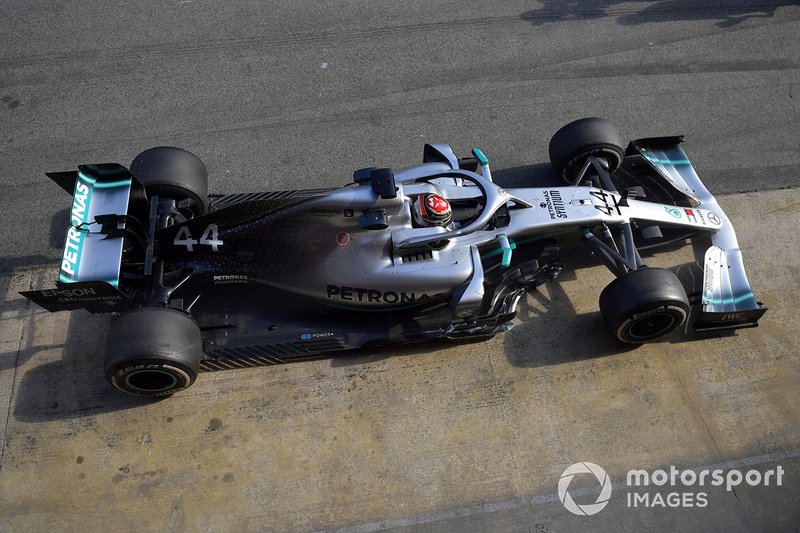 A nice top-down overview of the Mercedes W10 showing just how tight the sidepods are. 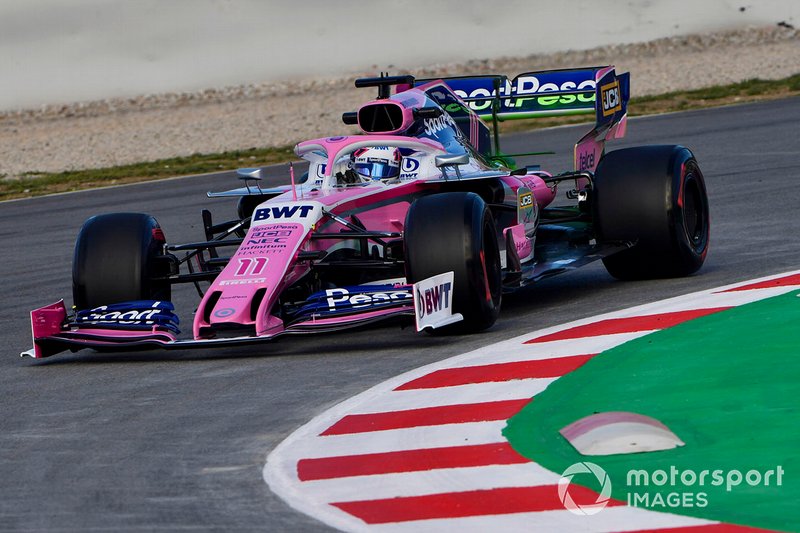 The Racing Point RP19 was sprayed with flo-viz around the rear end as the team looked to gather imagery on the flow being created.

Giorgio Piola and Motorsport Images bring you the Formula 1 technical images available from the first day of testing at the Circuit de Barcelona-Catalunya.