Grosjean: Bottas crash means Friday work "all in the bin" 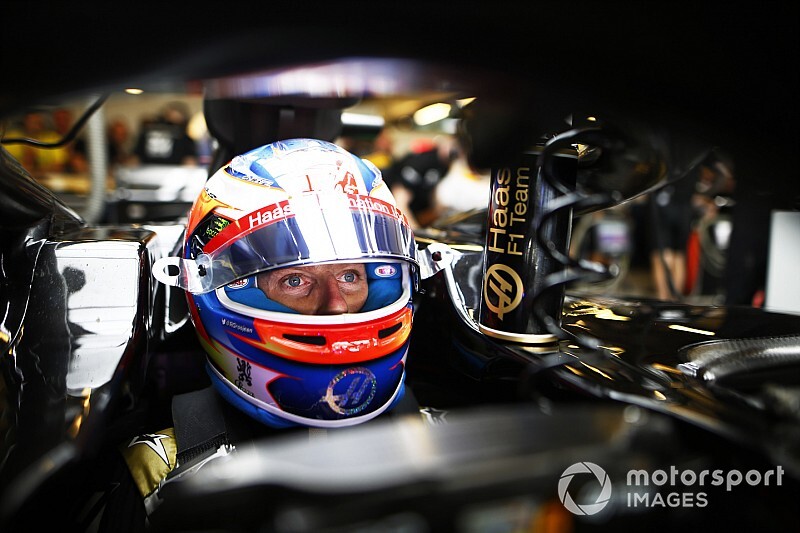 Romain Grosjean says his Friday practice work at the Abu Dhabi Grand Prix wound up "all in the bin" due to the Valtteri Bottas clash that will force a change of spec.

Haas driver Grosjean ended the day fastest of Formula 1's midfield runners in seventh place, but was wiped out by Valtteri Bottas in a crash in FP2 that Bottas has since been reprimanded for.

Grosjean, who expected to run a floor used in winter testing this weekend, began Friday with "the Race 15 package" and stuck with it throughout the day.

However, the damage inflicted by the Bottas collision means he will not be able to continue running this specification on Saturday and Sunday.

"It's a long story," Grosjean explained. "The plan was to try in FP1 the latest configuration that we received, that Kevin tried in the USA, and he wasn't happy at all with it.

"And the guys made some small changes on the diffuser and we put it on my car to get data basically, and we said the plan was after FP1 we revert to the 'Race 1 hybrid' car.

"But in FP1 I felt really good in the car, and I said to the boys, I think we can try to race that package, we can try to work around the set-up, there are some good characteristics that I like - end of the braking, the car turns a little bit better, so it's better for my driving style. So I think we can get there.

"And then we had the incident with Valtteri and the bad news is that we had only one set of that car.

"So now I need to revert to the car that Kevin has been running. So I'm going to take what they've done. But obviously all of Friday is kind of going in the bin."

The FIA stewards' verdict said Bottas had taken the blame for the accident, and Grosjean - who said he appreciated the Finn apologising - revealed Bottas told him he was practicing overtakes ahead of his back-of-the-grid start on Sunday.

"I spoke with Valtteri, and he apologised, which is nice, he said 'look, I'm starting last Sunday so I'm trying overtaking maneuvers, and that one was probably from too far away'.

"I didn't expect him to lunge from so far away, and then eventually he was in my blind spot so it's not like I could open the door. I think it was his fault, he apologised, it happens, we all do mistakes.

"Gunther [Steiner, team boss] was reminding me that I spun in the pitlane in Silverstone, I said 'thank you boss, that's still painful' - but we all do mistakes, we're human, the only thing that I'm a bit sad about is that we've lost the car that we wanted to run."

He said Bottas jokingly offered to lend Grosjean one of his spare floors, adding "it hasn't been mapped in the wind tunnel so it's going to be tricky".

Asked if a reprimand was sufficient for Bottas, Grosjean said: "I don't know, he's already starting last on the grid, so you can give him as much [of a] grid place penalty as you want, it's not going to change anything.

"It's not a good move, he apologised. Is it necessary to do that in FP2? I don't believe so. Is it putting us on the back foot? Yes. Is it going to hurt Mercedes? Not really.

"A reprimand? Well, I'm not a steward and I'm happy not to be one."