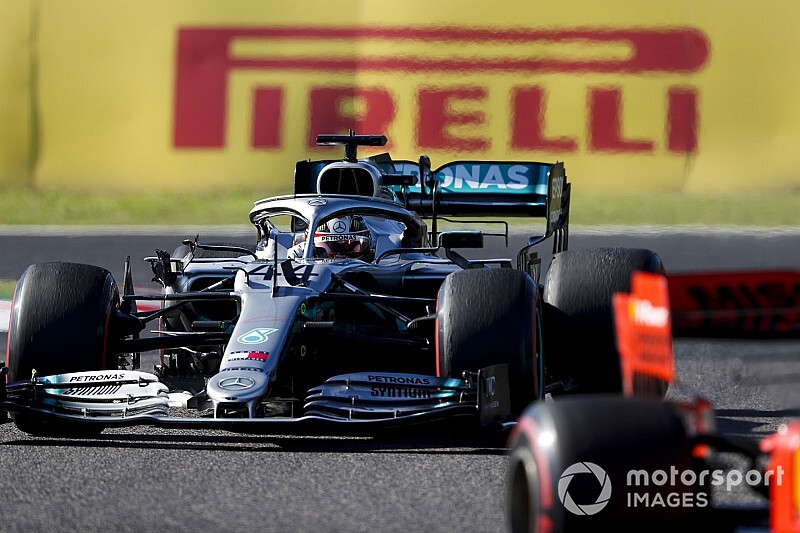 Lewis Hamilton says Mercedes has "no hope" of challenging Ferrari on Mexico's straights this weekend, as he has his first opportunity to wrap up his sixth Formula 1 world championship.

The Mercedes driver is 64 points ahead of teammate Valtteri Bottas in the standings, and a podium finish this weekend could be enough to secure the title.

But while he is aware of the opportunity he has to add another drivers' crown, he knows that Ferrari's straightline speed advantage means his team will be on the back foot this weekend.

Speaking about his focus on wrapping up the title in Mexico, Hamilton said: "I think for me it's never been a case of always wanting to rush things.

"Valtteri's driven well all year long, he's done a great job today and he will most likely do a very very solid job these next races, so we still have a battle, the fight continues.

"I think Mexico is generally our worst race of the year because of the way our car is set up and it's going to be a tough one for us. The last few have been pretty shocking, even though we've won the title there.

"I'm hoping for a better weekend but I think it's going to be very hard to beat the Ferraris with those long straights.

"We have no hope of getting by on those straights, that's for sure. But even if you look at the others, the McLarens are picking up some serious speeds on the straights, so are the Red Bulls so I think it will be a tricky one.

"I don't anticipate it will be Mexico. I think we will be battling for a good few races."

Hamilton needs to hold a 78-points cushion over Bottas after Mexico to be guaranteed the championship.

Thanks to the addition of a bonus point for fastest lap this year, who takes that could be decisive for whether or not the battle continues to the United States.

Here is what Hamilton needs to win the title in Mexico:

* If he wins and gets fastest lap, Bottas needs to finish at least third.

* If he wins and does not get fastest lap, Bottas needs to finish at least fourth.

* If he is second (irrespective of fastest lap), Bottas needs to finish seventh or higher

* If he is third and gets fastest lap, Bottas must finish eighth or higher.

* If he is third and does not get fastest lap, Bottas needs to finish ninth, or 10th with the fastest lap.

While Bottas knows it will be a tall order for him to overhaul Hamilton to the world championship this year, he is well aware that circumstances can change quickly in F1.

"I don't really give up on anything as long as there's a theoretical chance so there's no point in that," he said. "Everything's possible although I'm realistic as well that I will need to be very lucky, that's a fact, to win all the rest of the races.

"It is my bad, mostly, that I've been behind this much in the points compared to Lewis. It's my fault which I try to fix for the future but it is where we are now and just take it now race by race and see how it goes. "

The mystery of Senna's #11 photo solved