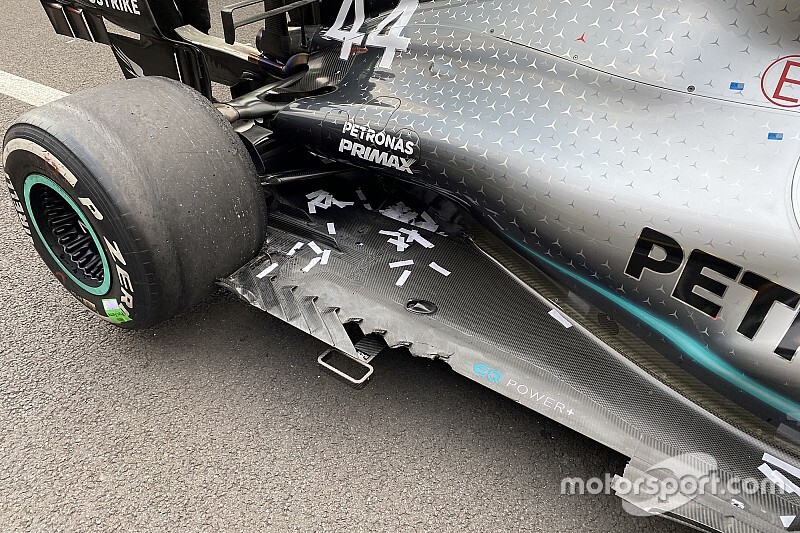 Lewis Hamilton admitted his charge to victory in the Mexican Grand Prix had been a "struggle" thanks to floor damage picked up on the opening lap of the race.

The Mercedes driver pulled off an impressive long stint on hard tyres to snatch victory from pre-event favourite Ferrari after bouncing back from near calamity on the opening lap.

Having lost momentum when forced wide by Sebastian Vettel on the charge down to the first corner, Hamilton then had a wild moment alongside Max Verstappen before Turn 2 – as the pair took to the grass.

When he rejoined, he then had a brief battle with Carlos Sainz before he was finally able to regain his composure and push back to the front.

But after the race, Hamilton made sure to inspect the broken right hand side of his floor – which had a big hole in it (seen in the photo above) as the result of the first-lap incidents – and he admitted things had been far from easy.

"We came here thinking we were on the back foot knowing it was a difficult race for us, but we pulled through," said Hamilton.

Hamilton's victory was made easier by gaining track position after making an earlier stop than race leader Sebastian Vettel to get the undercut.

And although the expectation had been for Hamilton's tyres to drop away, he kept things together – as Vettel admitted that Ferrari could have perhaps done a better job on strategy.

"I think Lewis, he was just cruising for most of the second stint to the point where the pack was arriving and I guess he had enough tyres left," said Vettel.

"I am happy because I think it was a good race. But I think here or there maybe with strategy we could have been a bit sharper."

Although Hamilton took victory, Valtteri Bottas's third place meant the Briton did not clinch the title on Sunday.

Hamilton, who needs just four more points, seemed far from disappointed about having not wrapped it up already though.

"I don't mind," he said. "I love racing and taking one race at a time. This is a race I have wanted to win for some time and it has always been a little bit tricky for us, so I am incredibly humbled by today's opportunity."