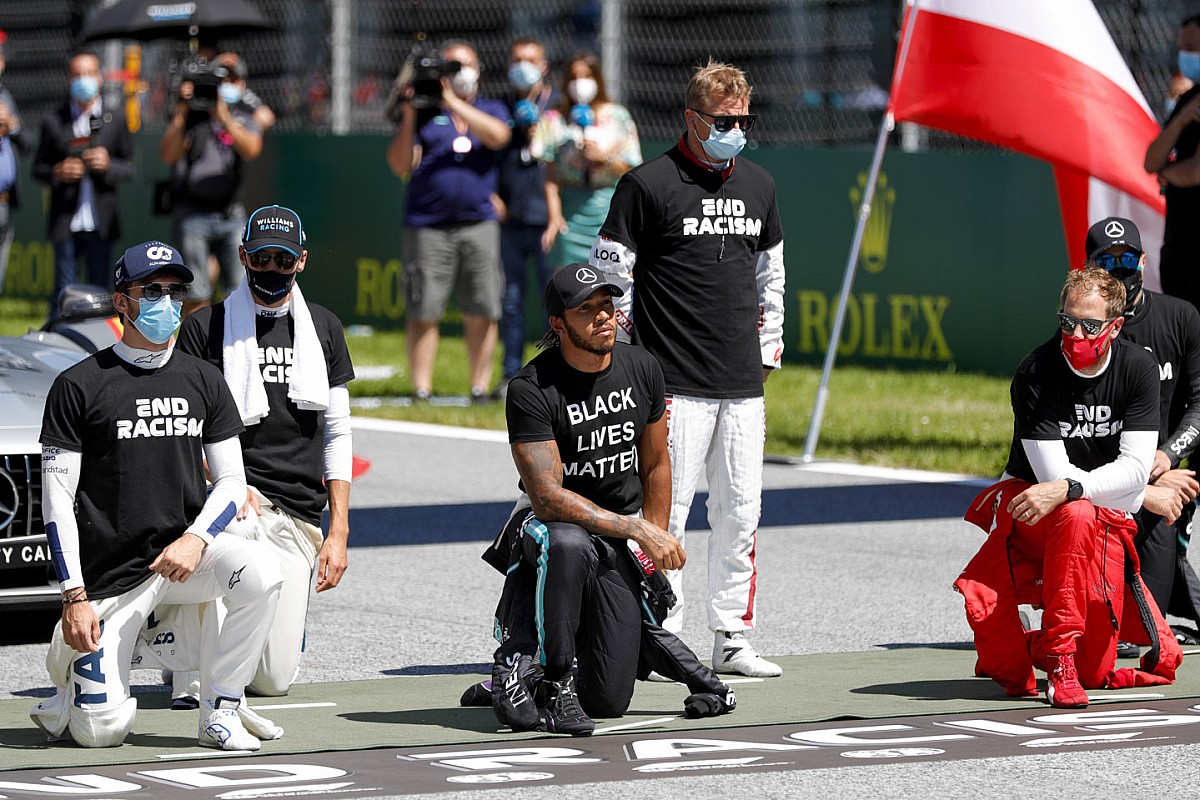 Lewis Hamilton insists that he didn't ask his fellow Formula 1 drivers to take a knee before the start of the Austrian GP, but says he's "really grateful" to those who chose to.

Hamilton says that the impetus for a gesture before the race came from F1’s ‘End Racism’ campaign, and from GPDA directors Sebastian Vettel and Romain Grosjean, who led a discussion on the subject in a meeting on Friday evening.

A key decision was to separate the anti-racism gesture, which was carried out on the startline, from the national anthem ceremony, which took place immediately afterwards on a socially distanced round red carpet.

Hamilton said he had no issue with the fact that, while they all expressed support for the anti-racism campaign, some fellow drivers chose not to take a knee.

“I honestly I don't know everyone's different reasons or opinions,” he said. “I am aware of some opinions from some of the drivers, but that's more of a private thing and I wouldn't like to share it, but I think ultimately nobody should be forced into a scenario where they have to kneel.

“And I really would just like to correct – there is a story I think, at least one out there that's really incorrect. I never requested or demanded anybody to take the knee. I never even brought it up. It was brought up by F1, and it was brought up by the GPDA.

“When we did the drivers’ briefing, Seb and Grosjean both brought it up, and asked the drivers whether or not they would do it, and there were obviously several that said they wouldn't.

“And I let everyone say what they wanted to say, and I just opened up to them and said, ‘Look, guys, just so you know, I will be doing it, but you do what you feel is right.’ And I'm really, really grateful for those who did kneel along with me.

“I think it's still a really powerful message, but ultimately whether or not you kneel or do not kneel, that's not going to change the world. And it's a much, much bigger issue across the world. I think everyone had a right to their own personal choice. And for me personally, that was what I felt was right to do, but I didn't make the decision until [the night before].”

Hamilton made the intriguing revelation that he had been “silenced” when NFL star Colin Kaepernick first inspired him to try a knee gesture.

“I'd actually spoken to him a couple years ago, I had a helmet and everything made in red for his with his number on the top. But back then, I was kind of silenced. I was told to kind of back down, don't support it, which actually I will say that I regret, so it was important for me to make sure that during this period of time, I did my part, and I think moving forward I need to try and continue.

“Whether that's continue to take the knee, I don't know if there's going to be opportunities to do that. But definitely don't do that on national anthems.”

Hamilton stressed the importance of not losing momentum: “I think it's really, really great that F1 and particularly Mercedes have taken note of the issue that we're facing across the world, and decided to do something about it.

“Ultimately everything we do is not going to be enough, and we all need to do more. And I think that there's been awareness for a few weeks, and what we don't need is for it to die a sudden death and just disappear and see no change.

“So, somehow, and ultimately, I could be the guinea pig there, I've got to keep speaking out and going back to it and just thinking, all of us, myself included, everyone has to look at accountability and see what they can do better within their own organisation with their own team. And moving forwards, I don't know if I'll continue to do it.”