Hulkenberg denies he could "slack" with Palmer as teammate 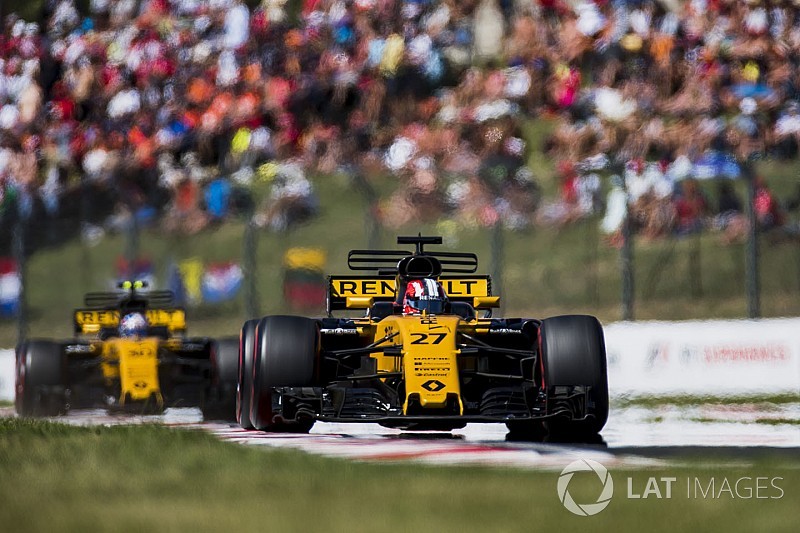 Nico Hulkenberg denies he could "slack" when he had Jolyon Palmer as his Renault Formula 1 teammate, and says Carlos Sainz's arrival made no difference to his efforts.

As part of the machinations around McLaren and Toro Rosso's swap of their Honda and Renault engine deals, Sainz was brought from Toro Rosso to Renault for the final four grands prix of the 2017 season.

He replaced Palmer, who had been outqualified by Hulkenberg for every race up to that point.

But Hulkenberg insisted the change in teammate had no impact on how hard he was pushing.

"I think it would be unprofessional if I would have had some slack at the beginning of the season because I was just safe," he told Motorsport.com.

"I don't think if I take the first half of the season, and any of my qualifying laps, that I would have found significantly more time if I would have had another teammate closer to me.

"I just don't believe it. I am convinced it is not like that."

Hulkenberg acknowledged that he and Sainz form a very strong pairing for Renault going into 2018.

"He is pushing and I am still pushing, we are pushing each other to the benefit of the team," he said. "He is giving good feedback to the team as well.

"Two guys, instead of one, pushing everything forward is really important for a team."

Sainz said he had "already seen differences" he could learn from by watching Hulkenberg working with Renault in the final part of 2017.

"Everything is going to help I'm sure," Sainz told Motorsport.com. "I want to be up against a guy that has seven or eight years in Formula 1 that's really settled nicely into a team like Nico has over the last year.

"There is only things to learn and things to look out for so I'm going to just get into the atmosphere.

"We're going to push each other hard because I think also Nico welcomes the challenge of having me next to him and it's just going to push the whole thing forward.

"Already on the simulation we have a lot of similarities and that's going to help going forward."

How Verstappen's trials took him to a new level