As had already been anticipated for some time, McLaren Mercedes today announced that Lewis Hamilton would be joining Fernando Alonso as the second McLaren race driver for the 2007 Formula One world championship challenge. Lewis ...

As had already been anticipated for some time, McLaren Mercedes today announced that Lewis Hamilton would be joining Fernando Alonso as the second McLaren race driver for the 2007 Formula One world championship challenge. 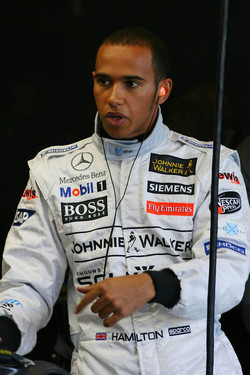 Lewis Hamilton.
Photo by xpb.cc.
"To be racing in Formula 1 with McLaren has been the ultimate goal for me since I was very young," Hamilton said. "This opportunity is a fantastic way to end what has been the best year for me. I have grown up with McLaren and Mercedes and wouldn't be where I am today without their continued support and guidance."

The 21-year-old has been on a McLaren driver development contract ever since the young age of 12, having already won four British karting championships by that time. He followed up by winning the European and world titles in karting.

In 2002, Hamilton graduated to single-seaters, making his debut in the Formula Renault category and finishing third in the British championship in his first year of racing cars. By the following year he had fully adapted, winning the series in dominant fashion with 11 poles and 10 victories.

2004 and 2005 saw him move up to the F3 Euroseries, finishing fifth in the standings in his rookie season and then, again, winning the championship in style, with 15 victories and 13 poles, his second year. 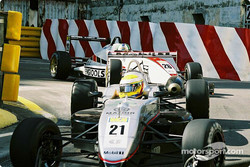 Lewis Hamilton.
Photo by Stella-Maria Thomas and Lynne Waite.
Finally, this year, Hamilton stepped into 2005 champion Nico Rosberg's seat in the GP2 series, and this time took the championship in his first year. He claimed a total of five victories and fourteen podium finishes, holding off a late-season charge from Nelson A. Piquet to win the title by a margin of 12 points.

At the same time, Hamilton had been testing for McLaren, alongside F1 veteran Pedro de la Rosa and DTM ace Gary Paffett. When Juan Pablo Montoya made the late-season jump to NASCAR and team principal Ron Dennis looked to replace him, Hamilton's name was on everyone's lips for replacing Montoya for the final races of the season.

In the event, Dennis chose de la Rosa's experience for completing the 2006 season, but for 2007, the team is going with the young Hamilton, a potential future superstar.

"Lewis has formed an important part of our long-term strategy since 1998," Dennis explained. "Pedro has done an outstanding job for us this season but we felt it was the right time to provide Lewis with this opportunity. He is coming into the paddock for the first time as a Formula 1 racing driver and will have to familiarise himself with the pressures of a Grand Prix weekend. However the confidence we have in Lewis's abilities and talent is clear from our decision to give him the chance." 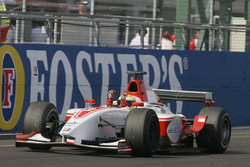 Race winner Lewis Hamilton celebrates.
Photo by GP2 Series Media Service.
For de la Rosa, this means a return to a testing role, surely a disappointment for the Spaniard, but he remains committed to the team.

"I really enjoyed the opportunity to race for Team McLaren Mercedes for the last eight races of the 2006 season," he said. "However, I have always been aware that the team might decide to give another driver the same opportunity, so the fact that Lewis will be in the car comes as no surprise. Obviously I would have preferred to race myself but also understand why the team has decided to put Lewis in the car."

The team will be resuming its testing program next week at the Circuit de Catalunya outside Barcelona.