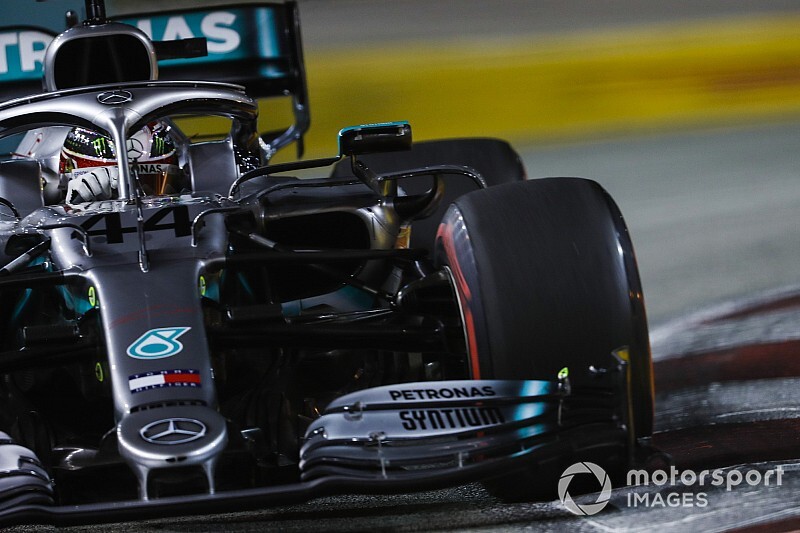 Leclerc surprised Mercedes and Red Bull by putting his Ferrari on pole position, although Mercedes driver Lewis Hamilton will line up alongside him.

Hamilton has hounded Leclerc in the past two grands prix but such relentless pressure comes at a bigger cost in Singapore, which is a long race that takes its toll on the drivers, cars and tyres.

Wolff said: "I think it's more difficult here, it's a little bit like Monaco, maybe not as bad, where it's really difficult to overtake – especially when they are fast down the straight – unless the pace difference is enormous.

"We don't expect that [pace difference]. Nevertheless we're going into the race tomorrow full steam ahead. The points are being awarded tomorrow, not today."

Hamilton has won the last two grands prix in Singapore and taken four victories in total at the Marina Bay circuit.

Mercedes had an advantage during Friday practice's long-run work but Wolff is not convinced that will be enough to overhaul Ferrari now Leclerc has track position.

"Obviously if you're fast on one lap you've got to have the heat in the tyres for this one lap and it's something that can bite you on a race distance," said.

"But having said that once you are in front you have a decent opportunity in managing from there. I'd rather be on pole with a slightly compromised car than have a great race car but not be on pole."

Hamilton's final lap in Q3 got him onto the front row ahead of the second Ferrari of Sebastian Vettel.

He believes that could be a significant factor for today's race.

"Charles obviously put some great laps in and it really needed something special at the end so I gave it absolutely everything I had," he said.

"It was very, very close to the wall a couple of times but it was as much as I could get out of the car.

"I'm very, very happy to be on the front row in the mix with them so we can try to divide them [in the race]."

Hamilton questioned whether Leclerc's driving in their fierce battle in the Italian Grand Prix was legitimate but said afterwards he would change his approach if the rules have been clarified.

After qualifying in Singapore he said "tomorrow we can be aggressive", and when asked if that meant "different to Monza", Hamilton replied: "Ha! Well, it's a street track, but we'll see."