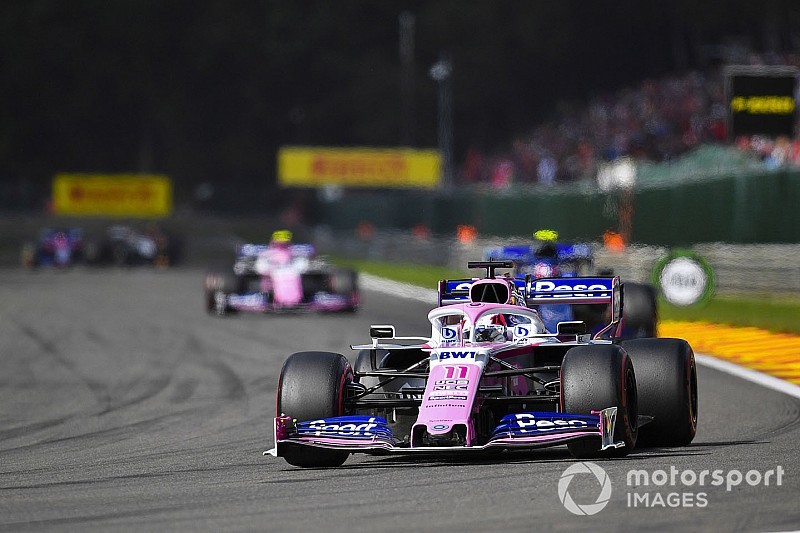 Red Bull driver Albon was attacking Perez's Racing Point as they ran up the Kemmel Straight towards Les Combes on the last lap of the race.

As he approached the rear of his rival's car, Albon moved right to squeeze by, but in doing so he put the wheels on the right-hand side of this car on the grass.

Albon was able to get ahead of went on to finish fifth in his first race for Red Bull.

Both drivers were summoned to the stewards to explain the incident, with "Alleged forcing another driver off the track between Turn 4 and Turn 5 by car 11 [Perez] on car 23 [Albon]" listed as the reason by the FIA in the respective official bulletins.

However, it was decided that no further action was necessary after both drivers agreed it was just "hard racing".

"ALB kept on with his overtaking move. PER said when he knew he was on his right he moved to his left. ALB successfully overtook PER. Each driver described it as hard racing and agreed there was potential danger.

"In view of the explanations and the successful overtaking move it was considered there should be no further action."

Speaking about the incident before the stewards' meeting, Albon told Sky Sports F1: “We were playing the DRS game [at Turn 1, to be behind through the detection zone] – obviously Sergio wants DRS and the Racing Point was [strong on the straights]. So it was like a VSC restart.

“The Racing Point was so quick down the straight all weekend – it was just kind of ‘after you’, ‘no, after you’ [in terms of accelerating out of Turn 1 on the last lap].

“We were catching Sergio at quite a good rate [after Eau Rouge] and hopefully he’s in the naughty seat. DRS is almost too good in some respects, so whoever gets DRS you pretty much overtake the car in front and with that in mind – even in [the past at this track] – you always fight for DRS when you know you’re going to lose the position.

“It was good fun and we had a laugh about it afterwards.”