Kimi Raikkonen says he had a "sh** weekend" in Monza after a mistake by his Alfa Romeo Formula 1 team earned him a stop-and-go penalty in the race. 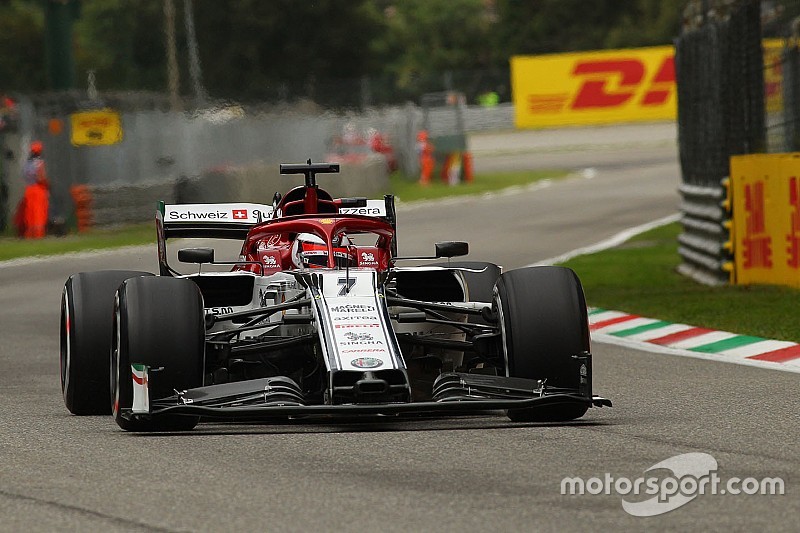 After crashing at Parabolica in FP1 on Friday, Raikkonen made the top 10 in Q2, only to have a second accident at the same corner.

The team was forced to change the gearbox, earning him a five-place grid penalty, and also took the opportunity to upgrade him to the latest Ferrari Spec 3 engine.

Because that decision entailed a change of specification from the Spec 2 he had used in qualifying, he was relegated to a pitlane start.

Alfa Romeo mistakenly thought that a pitlane start forfeits the obligation for drivers who make Q3 to start with their Q2 fastest lap tyres, switching him from his set of used softs to a new set of mediums with the intent of gaining a strategic advantage.

However, the Q2 tyre rule still applies to a pitlane start – unless the chassis has been changed, which wasn't the case on this occasion.

The offence was quickly reported to the stewards, who were obliged to give the mandatory penalty of a 10 second stop-and-go. Raikkonen eventually finished 15th.

"Well, that was a sh** weekend," he said. "First my mistake in qualifying which unfortunately meant that we had to change gearbox.

"Then we decided to also change engine and start from the pitlane, but we had the wrong tyres on and with the penalty my race was more or less over.

"Looking forward to Singapore, as it can't get worse."

Alfa Romeo team boss Fred Vasseur said the team accepted that Raikkonen had to push to the limit in qualifying.

"Sometimes a small mistake at the beginning can create a huge mess," he told Motorsport.com. We have to stay calm on this. He did a great job from the beginning of the season.

"We know perfectly if we want to do a P6 pr P7 in qualy we have to take a lot of risks, and we have to accept doing some risks that you can do some mistakes."

Regarding the tyre choice error, he said: "I don't know what happened, I need to investigate a little bit."

Mercedes did not have right package for Spa/Monza - Wolff