Russell thought he was on course for points in Monaco 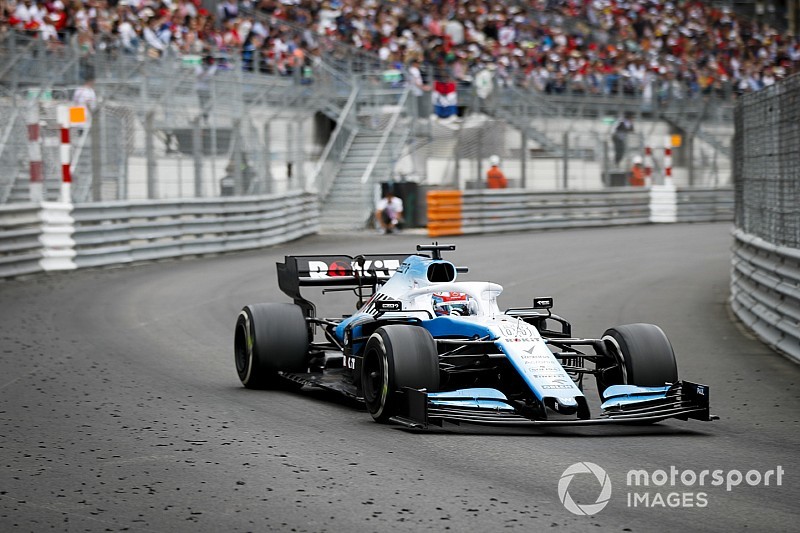 George Russell says he and his Williams Formula 1 team thought he was on course for points at one stage in Sunday's Monaco Grand Prix.

Russell outqualified Robert Kubica, taking the penultimate slot on the grid, but fell behind his teammate on the first lap.

He then pitted for hard tyres - which meant he did not have to stop again - at the same time as the frontrunners, when the safety car was deployed after a puncture for the Ferrari of Charles Leclerc.

After Antonio Giovinazzi tagged Kubica into a spin on lap 15, Russell slipped by them both to run behind Nico Hulkenberg's Renault in a train of cars following in the wake of McLaren's Lando Norris.

Such was the slow pace of the frontrunners at this point that Russell's engineers briefly thought a points finish might be possible - before that hope evaporated as a gap created between the leaders and the rest of the pack.

"It could have turned out even better," Russell, who finished 15th, told Motorsport.com.

"One of the guys was bunching everybody up in the pack and holding us up, unfortunately, but there was one point where we thought we were going to be ahead of [Carlos] Sainz in P6.

"From my side I was really happy with the race, we weren't really fighting for anything in the final half of the race but I wanted to treat it like we were, because I've got to test myself and put it on the limit so that when the time comes and we are fighting, I know what to expect.

"I was giving it everything out there and I think the times were fairly decent."

Russell's 15th place was still an encouraging result for a team that had expected to struggle on the unforgiving street circuit.

Kubica said after practice on Thursday that Monaco's characteristics highlighted the shortcomings of Williams's troubled FW42, which proved to be "slower than we wanted, and maybe what we expected".

Russell said after the race he was delighted with Williams's performance.

"I don't want to say we overperformed but I think we maximised the job," he said. "It was great to get so many laps under my belt, really pushing my limits.

"There was one point where my engineer came on the radio and said I was lapping at the same pace as the leader."

Ferrari is self-destructive, Renault is all talk