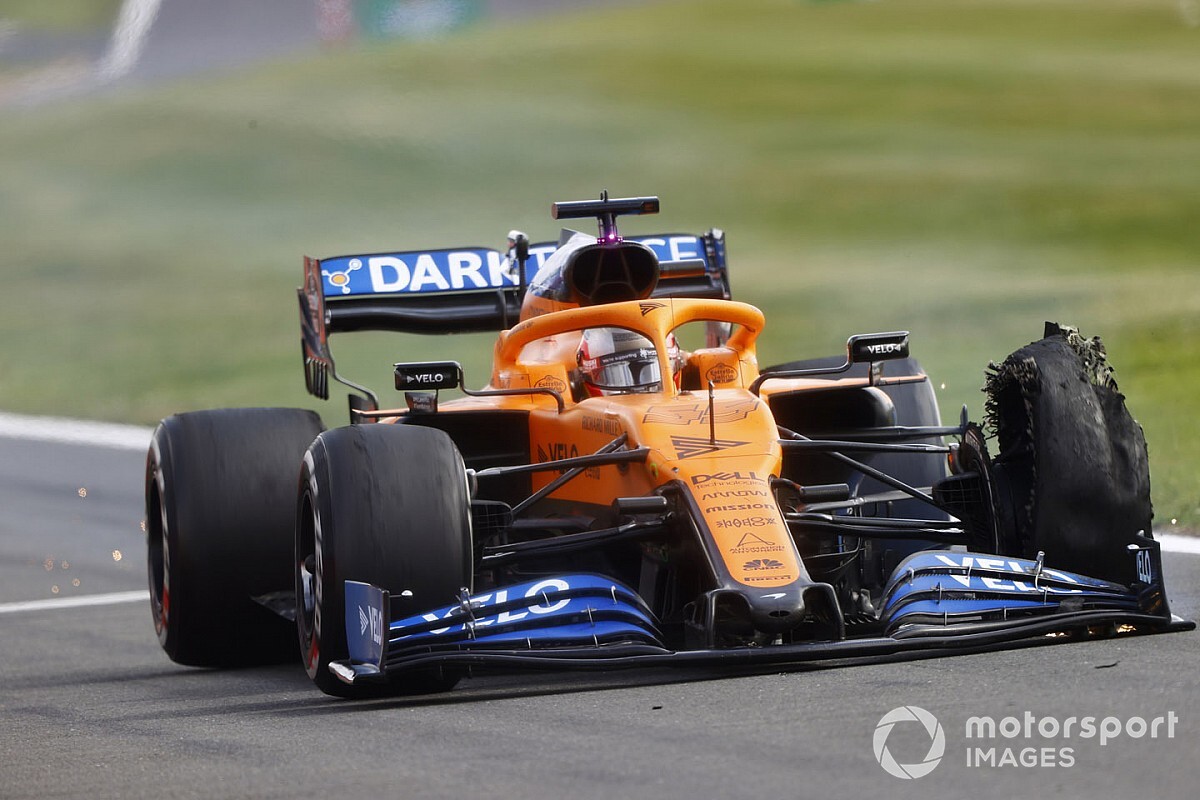 McLaren Formula 1 boss Andreas Seidl says that the Woking team had no warning of the "sudden death" of Carlos Sainz's left front tyre in the closing laps of the British GP.

The Spaniard was running a strong fifth and had just moved up to fourth after Valtteri Bottas suffered a tyre failure when he suffered a similar issue on the penultimate lap.

He got the car back to the pits, but finished out of the points in 13th place. A fifth-place finish for teammate Lando Norris gave the team some compensation.

Seidl insisted that up to that point of the failure there had no concerns about tyre life during the race.

"No, not really," he said when asked if there was any warning. "Carlos was reporting some vibrations early on in the race, in his stint on the hard tyres, but there was nothing extraordinary.

"It was a sudden death of the tyre, and obviously very disappointing at the moment for the entire team and especially for Carlos.

"But at the same time, that's part of racing, that happens in racing. It's important to look at the positive stuff from today, learn from what was not ideal, and do it again next week.

"We didn't have any signs of a tyre failure coming. We knew we had to manage the tyres for this long stint on the hards, but there were no concerns from our side or from Pirelli's side that we could complete the stint, and we are seeing with several cars there were issues in the end.

"But I think it's also important now to not jump to conclusions too early."

Seidl says the team is willing to adapt to any Pirelli's requirements for next weekend's 70th Anniversary GP, when a softer range of tyres will be used.

"It's important to wait for the thorough analysis of Pirelli, together with the teams, of what was actually causing these tyre failures. In theory it could be also down to some debris.

"So we need to wait for that, and then I'm sure Pirelli will make the right conclusions taking into account also the expected ambient conditions for next weekend, where it looks we'll get some really high ambient temperatures again.

"And then I'm sure they will make the right conclusions in terms of first of all the tyre selection, so the question is does that need to be reviewed? Or we might get some restrictions in terms of how we use the tyres.

"We need to wait for the analysis, and then I'm sure we will make the right decisions with Pirelli in terms of safety. Safety always has the highest priority, but again at the moment we can't make any judgement or conclusion."

Seidl praised Sainz for his charging performance from seventh on the grid.

"I feel very sorry for Carlos because he showed us a very strong drive today," he said. "He felt comfortable with the car all weekend, he did some great manoeuvres on track, straight after the restart.

"But that's part of racing, sometimes it goes like that and in the end it's important to make a reset tomorrow morning, see what we can learn from this weekend, take the positives as a motivation and try again next weekend.

"I think the strategy team today did a great job of making the right calls on the safety car, pitstops today was very good outcome for us, I think it we did the fourth quickest pitstop also today in the race for our crew, which was great to see, also the first stop of Lando was a quick one but we had to hold then the car because of traffic.

"So a lot of encouraging signs, at the same time we always want to do better, so let's see what we can find during the week and try again."