Formula 1 is back, for Part 2 of the 2012 season. Round 12 of the FIA Formula 1 World Championship sees the Marussia F1 Team heading back out on the road after the long summer break and to Spa-Francorchamps for the Belgian Grand Prix. Spa is a diamond of a Grand Prix venue, so what better place for the team to celebrate its 50th Grand Prix.

Timo Glock, Driver #24: “After such a long summer break, everyone in the team seems revitalized and ready to embark on the next important phase of the season. I myself had a nice mix of relaxation and training and now I’m looking forward to getting back to racing. 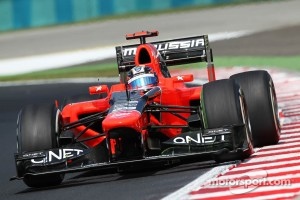 Over the next nine races we will be working hard to optimize our current package, at the same time as doing some important work towards next year. Those races will take place over just 14 weeks though, so with the long haul phase it will be non-stop action. To come back racing in Spa is a perfect way to pick up the rest of the season.

It’s one of my favorite races, with a historic circuit that has a fascinating layout. The track is very fast and long with some very tricky corners, so any small mistake ruins the lap. The weather is often a factor, especially due to its changeability. Rain can come very quickly, but this is part of the thrill of racing here. I’m really excited and looking forward to the weekend ahead.”

Charles Pic, Driver #25: “I ended the first part of the season on a strong note, partly due to the team’s improved performance, and satisfied with my progress so far in my debut season.

The break has given me time to reflect on those eleven races, which seemed to pass by so quickly, and my plan is to consolidate everything I have learned from the team and the car and wrap it all together to have what I hope will be an even stronger second part of the year.

The summer holiday has been good for all of at the Marussia F1 Team and everyone seems refreshed and buzzing with enthusiasm for the next nine races, most of which are overseas, so it will be a busy time.

Spa is a fantastic circuit so I can’t wait to be back racing there next weekend. The whole experience is very challenging for a driver; the circuit has such a special atmosphere because of its heritage. I’m looking forward to racing there in a Formula 1 car for the first time and picking up where we left off in Hungary.”

John Booth, Team Principal: “Across the whole team there’s a real sense that we can’t wait to get back to racing. The break has been good for us and we’re ready to get on the road again. Timo and Charles seem invigorated, so we look forward to positive things from the second half of the season. Spa is a great place to get things started.

Not only do we all love this circuit, but this year we mark the occasion of our 50th Grand Prix there, which is an important milestone within the team. A lot has happened in the short space of two and half seasons of racing but we’re a stronger team as a result and equipped now to go on to bigger and better things.

It has been quite nice to note how many of the team have been with us since the very beginning - Timo included of course. In young teams a lot can change - especially its people - so it’s very encouraging that we keep building on our original strong core. As for the race itself, we hope to get the remaining Grands Prix off to a strong start in Spa and keep closing the gap to the front of the field.”