Join us as we delve into the latest technical developments from the Styrian Grand Prix at the Red Bull Ring, courtesy of Giorgio Piola and Sutton Images.

Click on the arrows in the images to scroll through them… 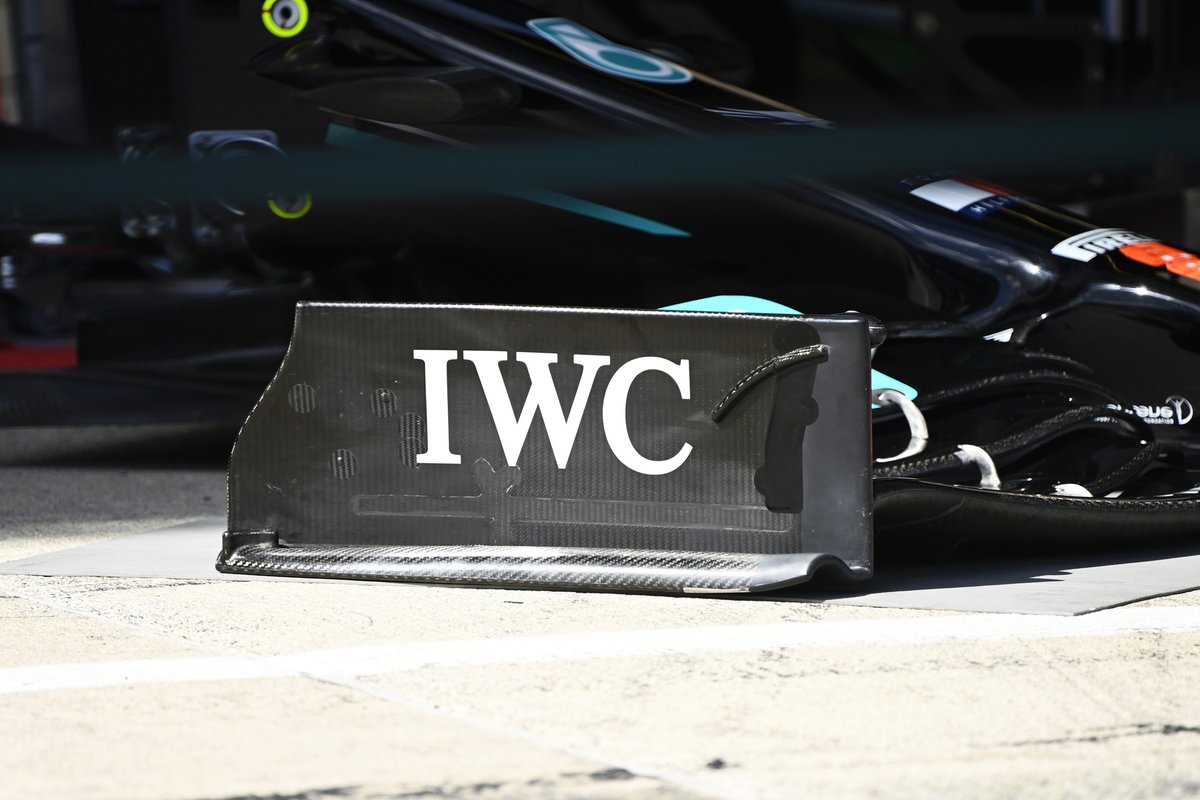 1/20
The Mercedes W12 front wing being placed on the floor illustrates how the forward-most section of the footplate is curved upward. 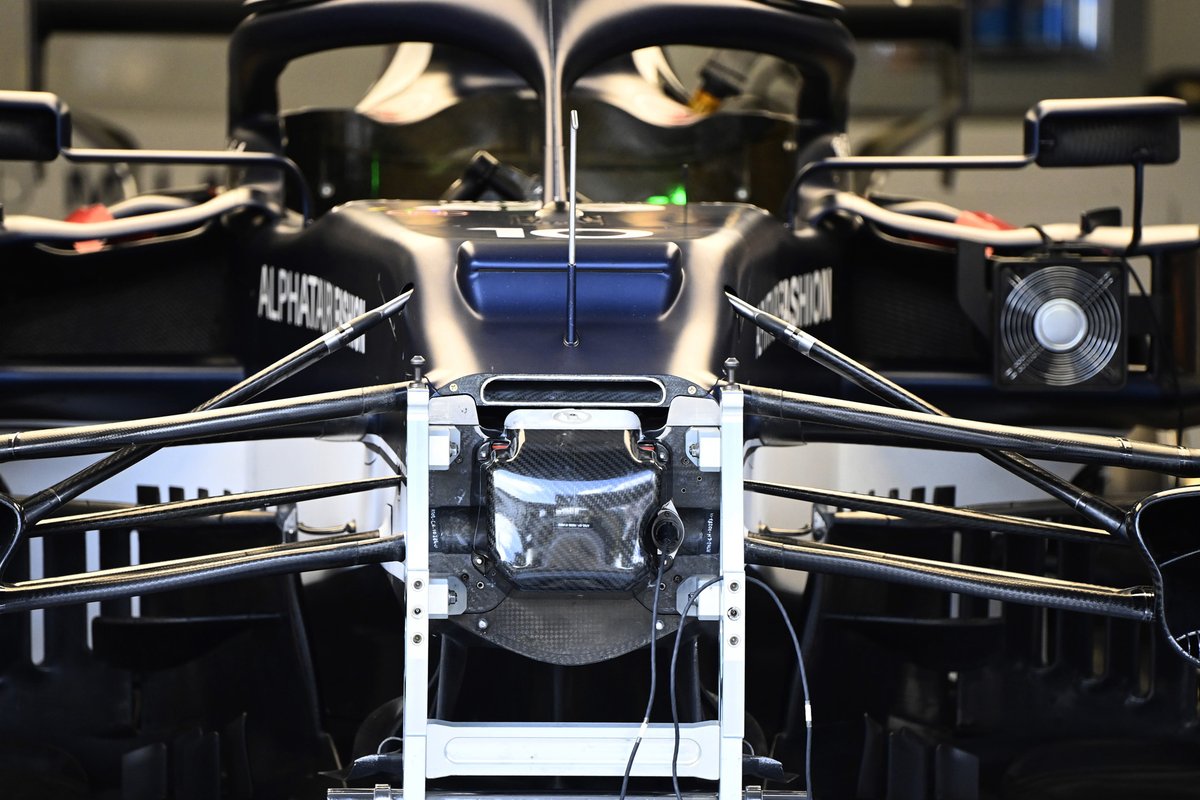 2/20
The front end of the AlphaTauri AT02 with the nose removed gives us a look at the transition inlet for the ‘S’-duct housed within the vanity panel. Note the notch still present in the bulkhead that used to house the steering assembly, which is now housed further back inside the chassis. 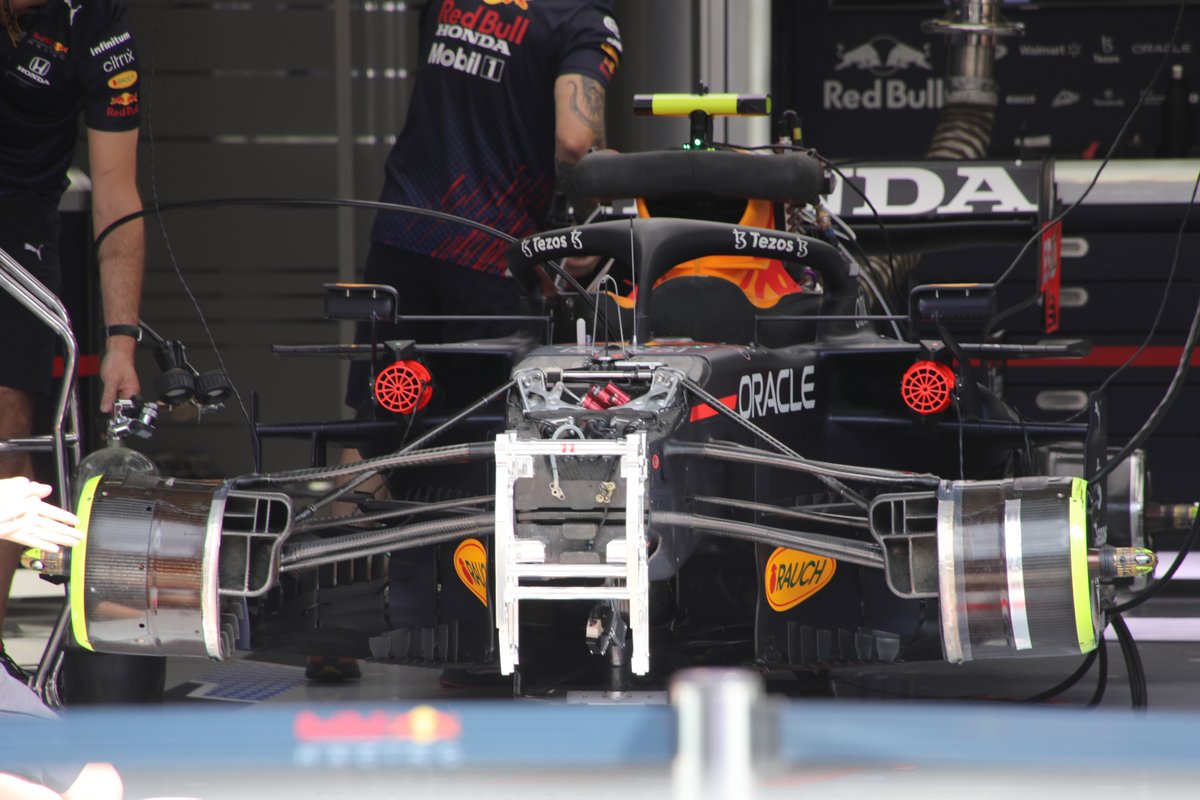 3/20
Red Bull has a few options available with front brake ducts this weekend as it looks to get the right temperature transfer from the brakes via the wheel rim to the tyres. This is the more closed-off version. 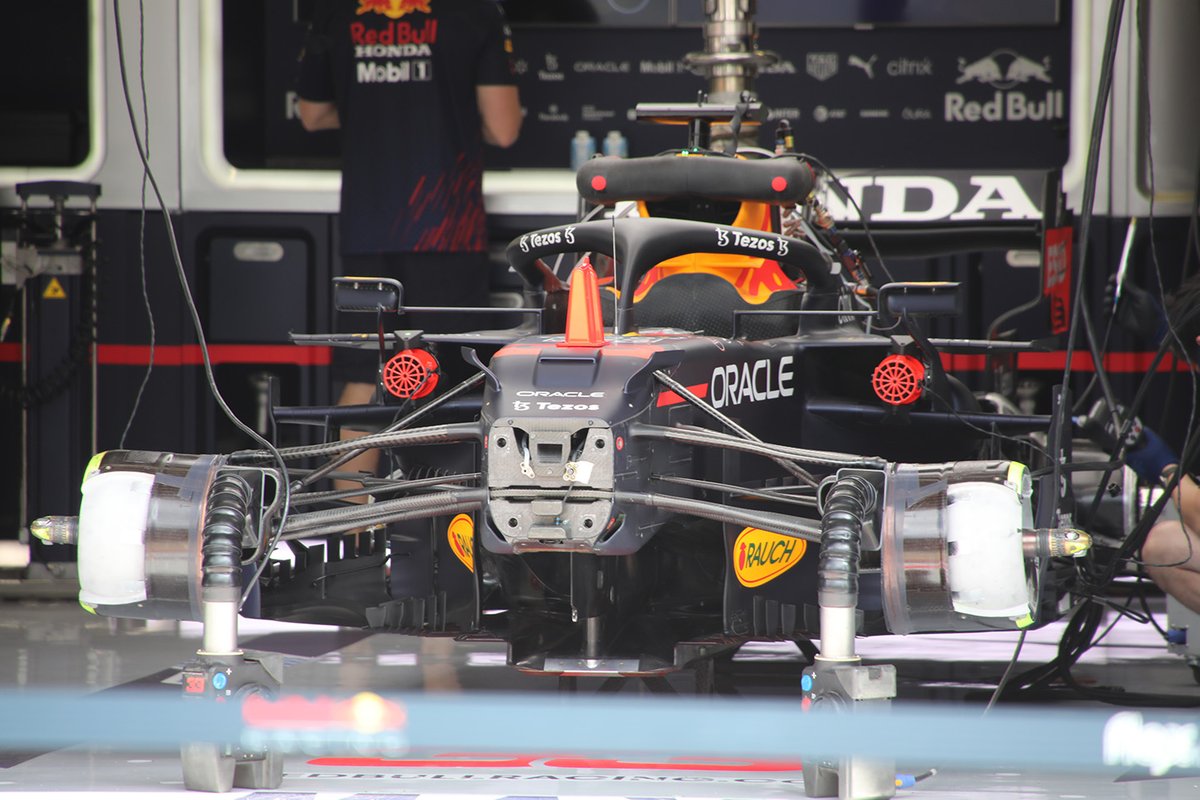 4/20
The setup on the other RB16B has the front panel of the brake drum removed in order that the airflow passing through that channel is exposed to the cavity between it and the wheel rim more. 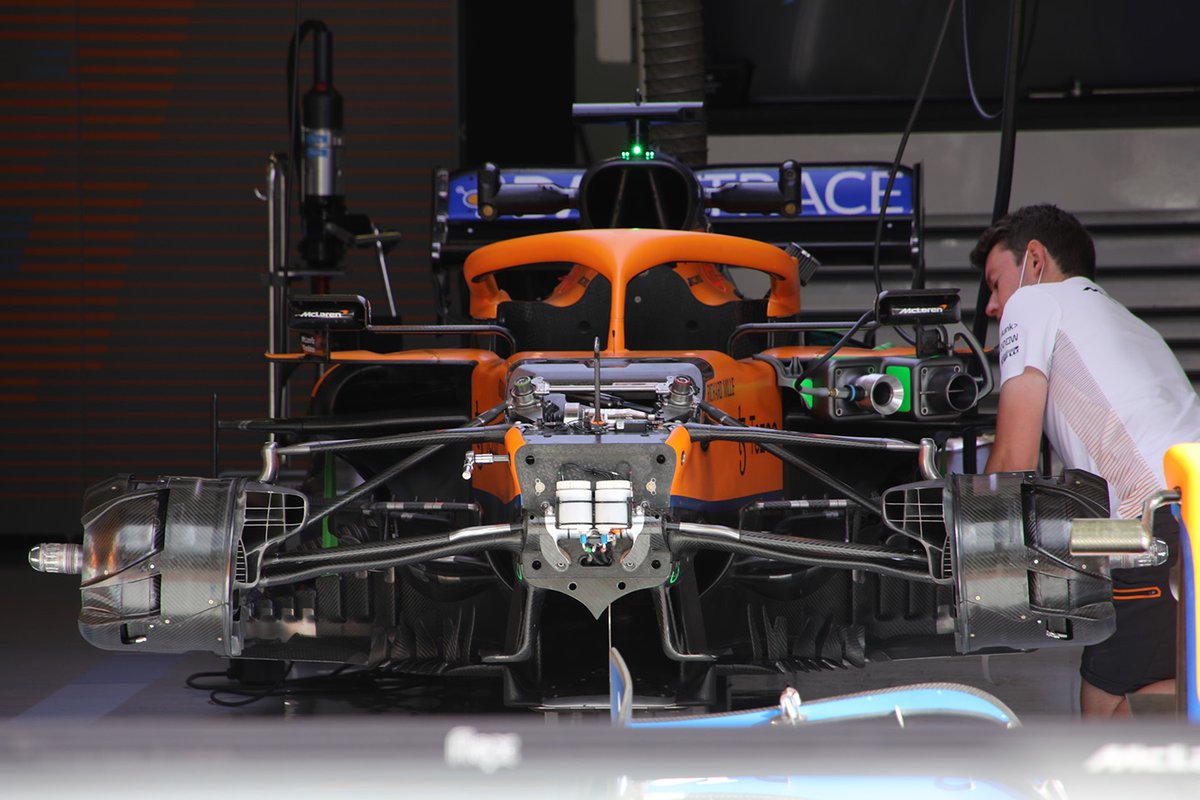 5/20
A similar shot of the McLaren MCL35M as the cars were prepared, for comparison, shows how McLaren invites the airflow to move through two channels before being pushed out of the wheel rim.

Mechanics build the car of Pierre Gasly, AlphaTauri AT02 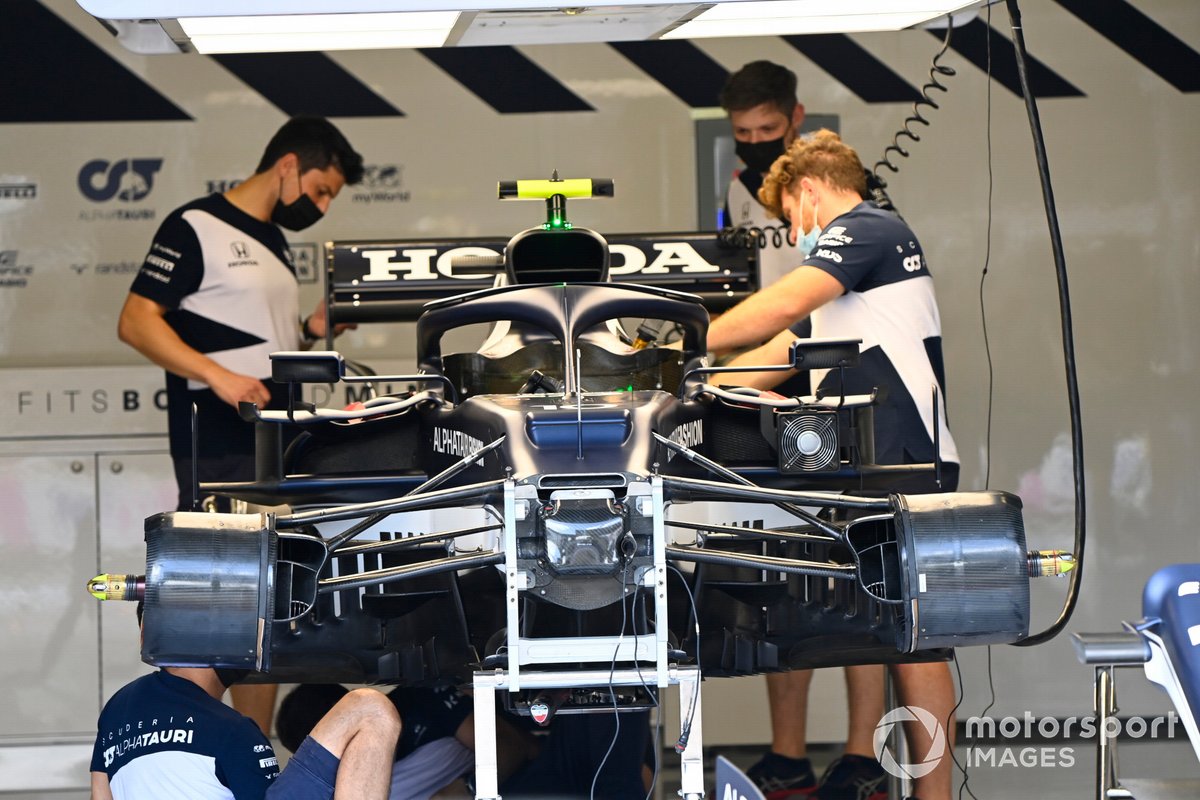 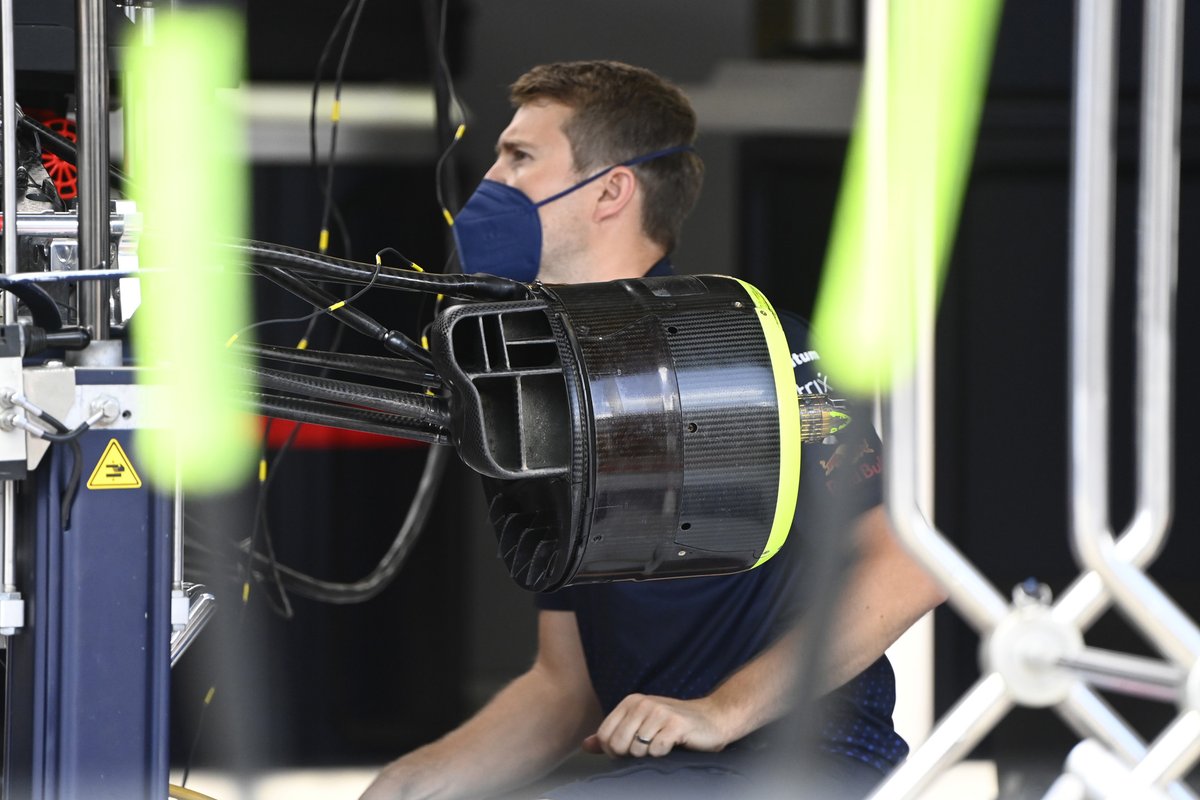 7/20
A closeup of the more enclosed Red Bull drum shows that the panel can be removed to create a more open arrangement. 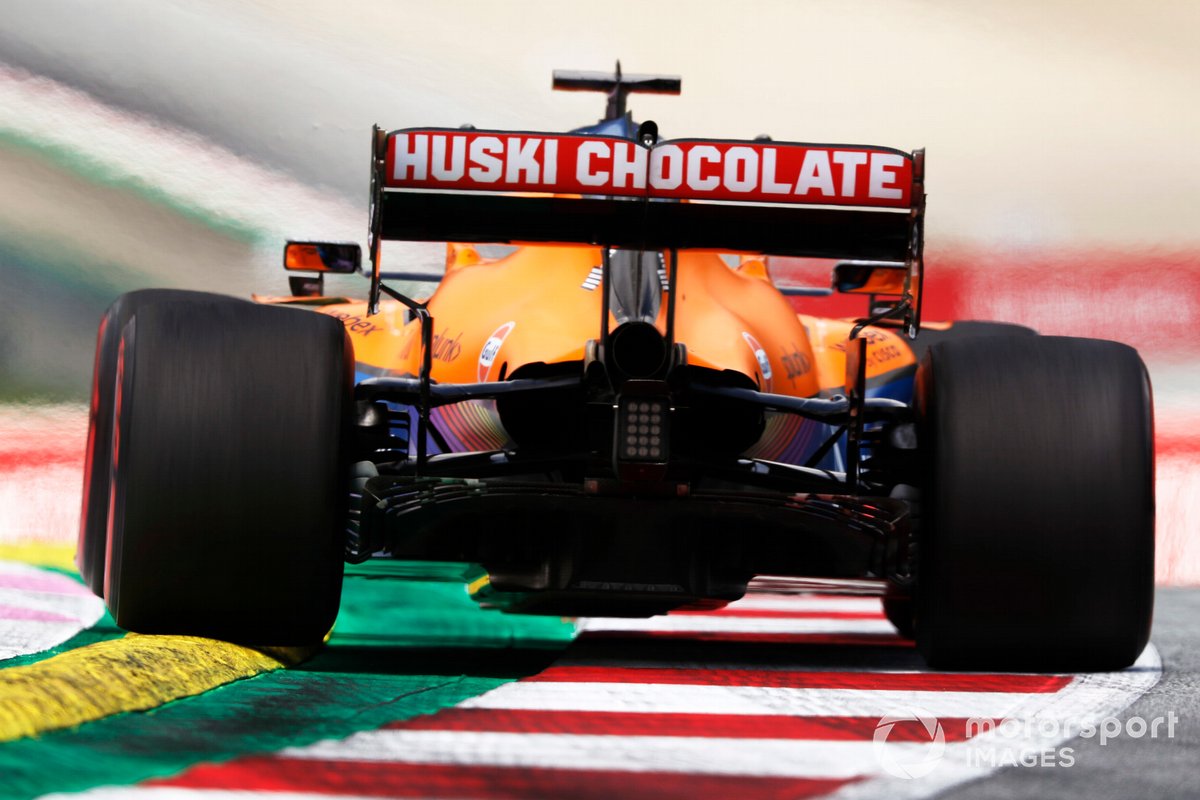 8/20
The McLaren MCL35M with the narrower rear cooling outlet as introduced at the French Grand Prix. 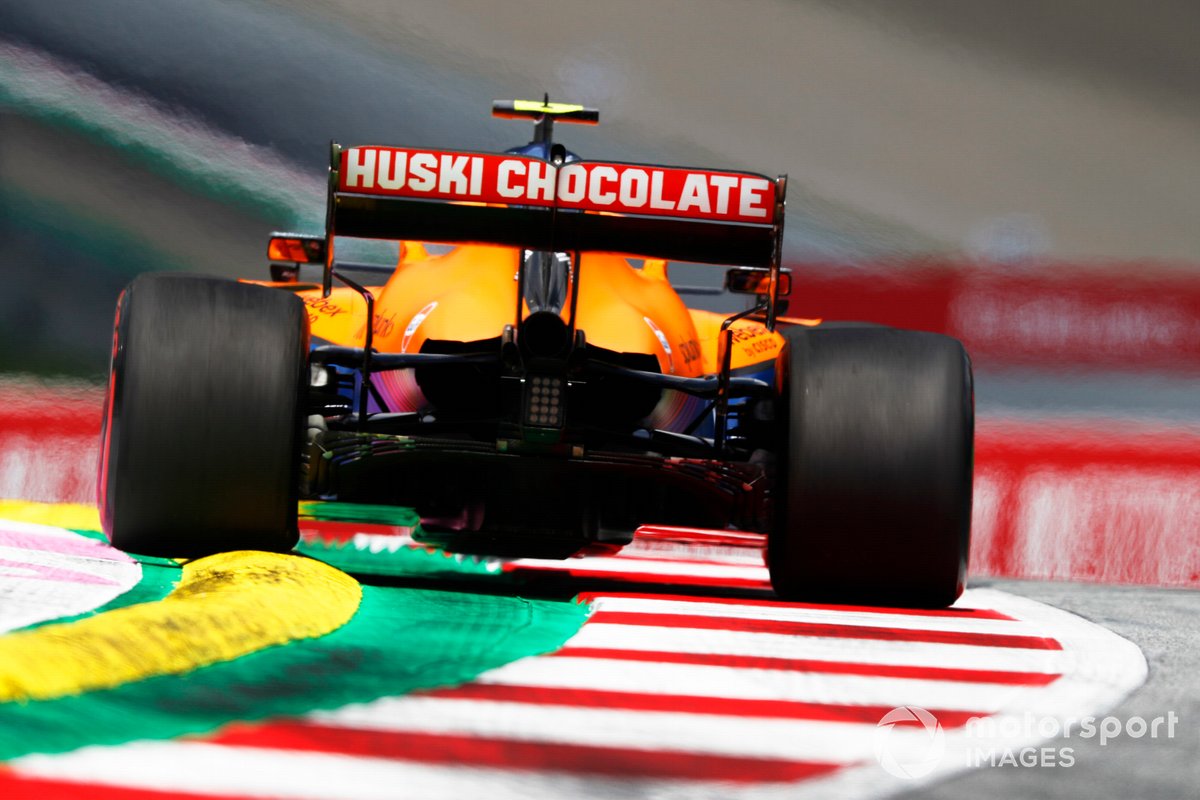 9/20
The McLaren MCL35M with the wider rear cooling outlet used during the opening phase of the season, as the team tests both options in an effort to understand what works best considering the altitude of the Red Bull Ring. 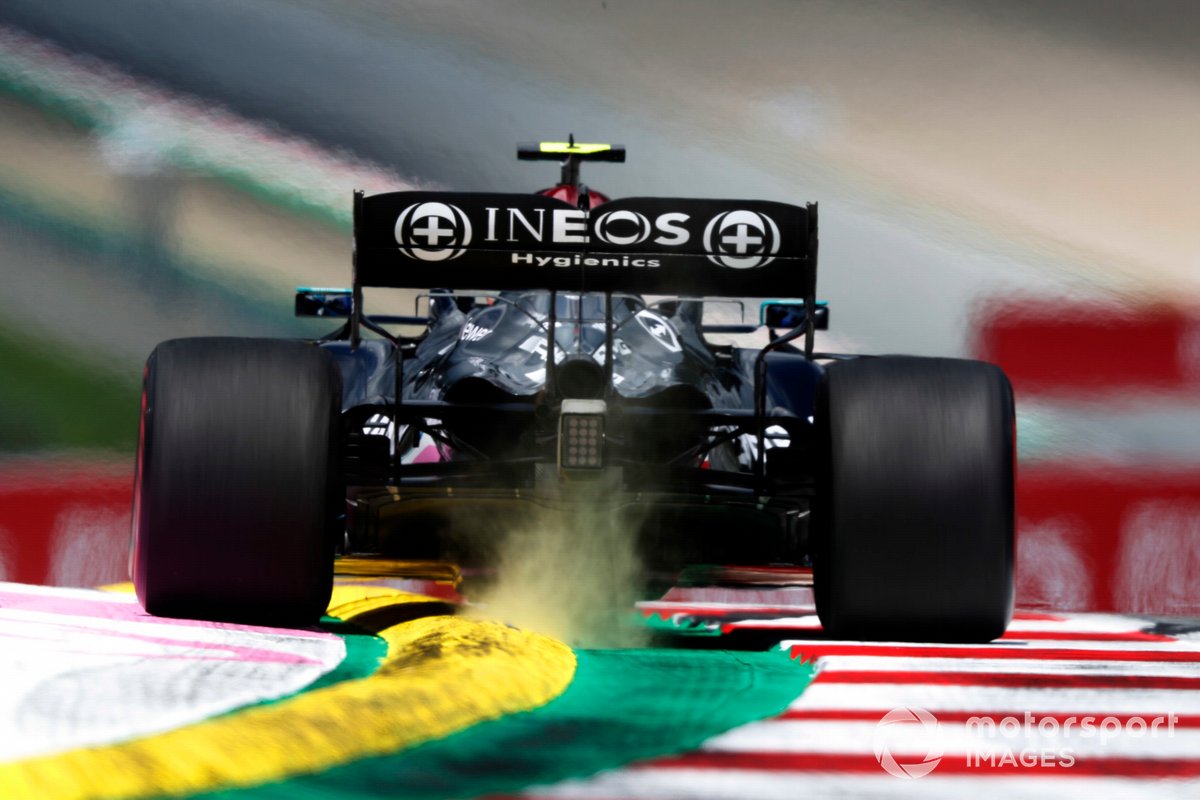 10/20
Mercedes with a larger cooling outlet than we’d ordinarily see them run, as it makes concessions for the altitude and their cooling requirements. 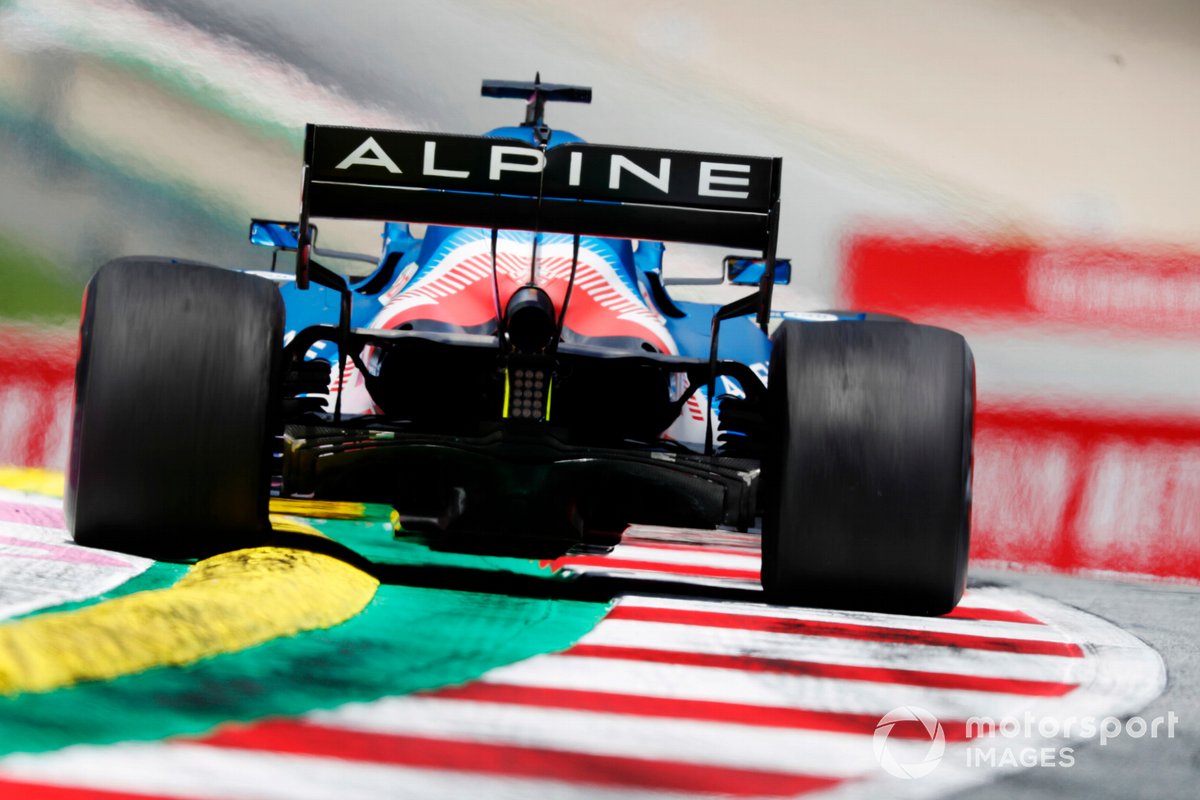 11/20
A sizeable cooling outlet could also be found on the Alpine A521 as the team made the necessary concessions for the Red Bull Ring. 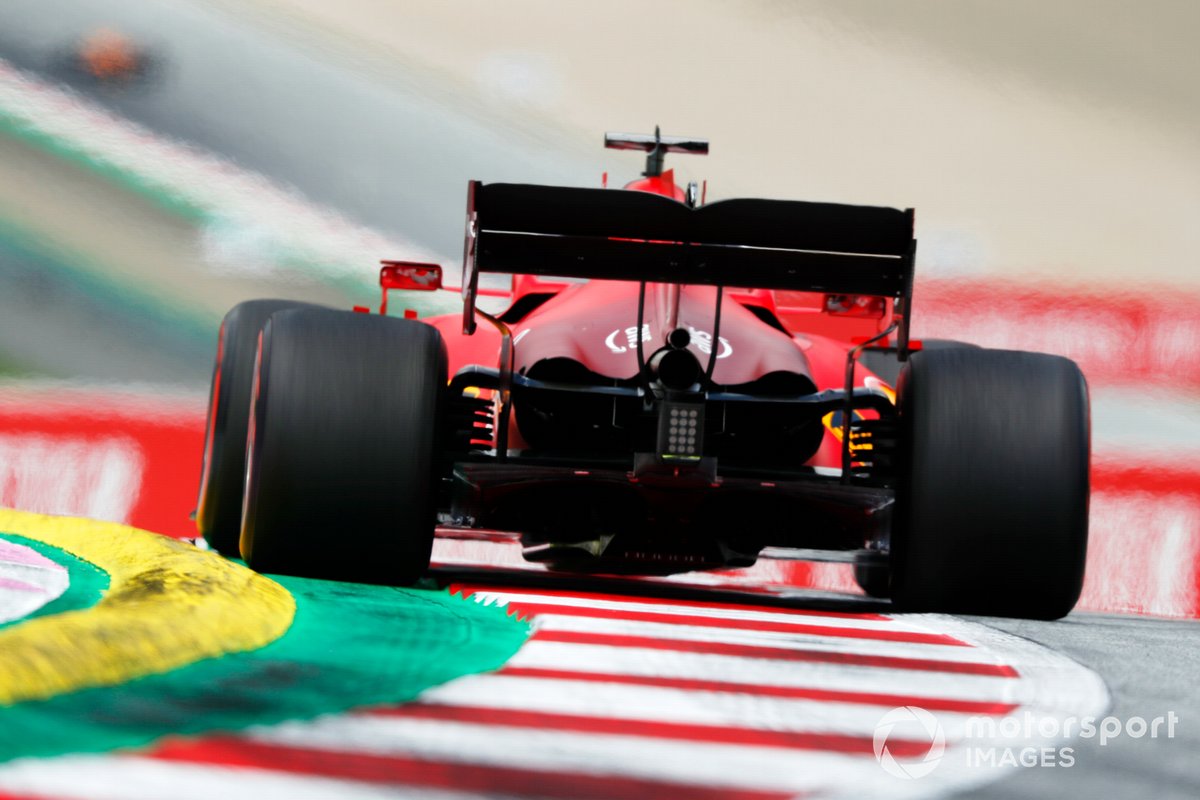 12/20
Ferrari is also running with the largest opening at the rear of the car to help keep things cool while providing as much power as possible. 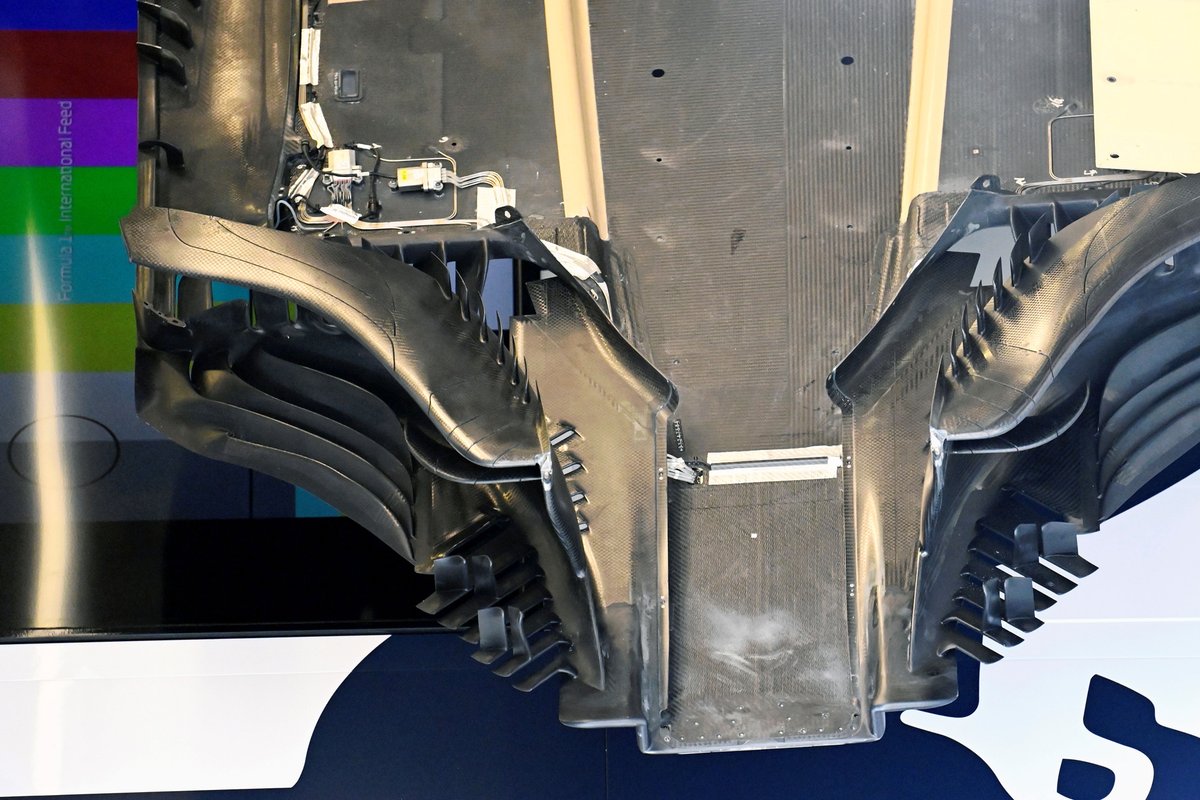 13/20
The floor of the AlphaTauri AT02 off the car shows how the splitter and bargeboard cluster have essentially become one much larger surface that now features extremely complex geometries to improve the airflow's route downstream. 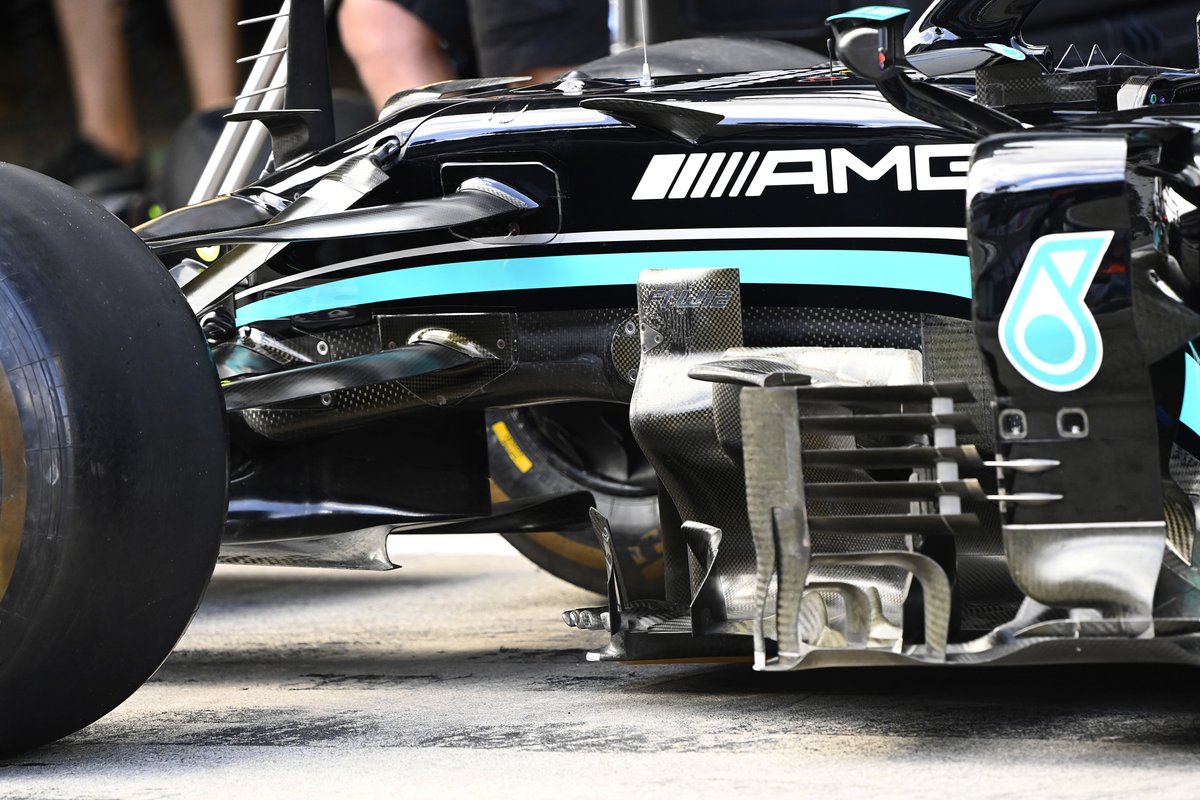 14/20
A look across at the rear end of the Mercedes W12’s cape and the curvature that’s used to roll up the airflow in a very specific way and deliver it to the bargeboard cluster and floor behind. 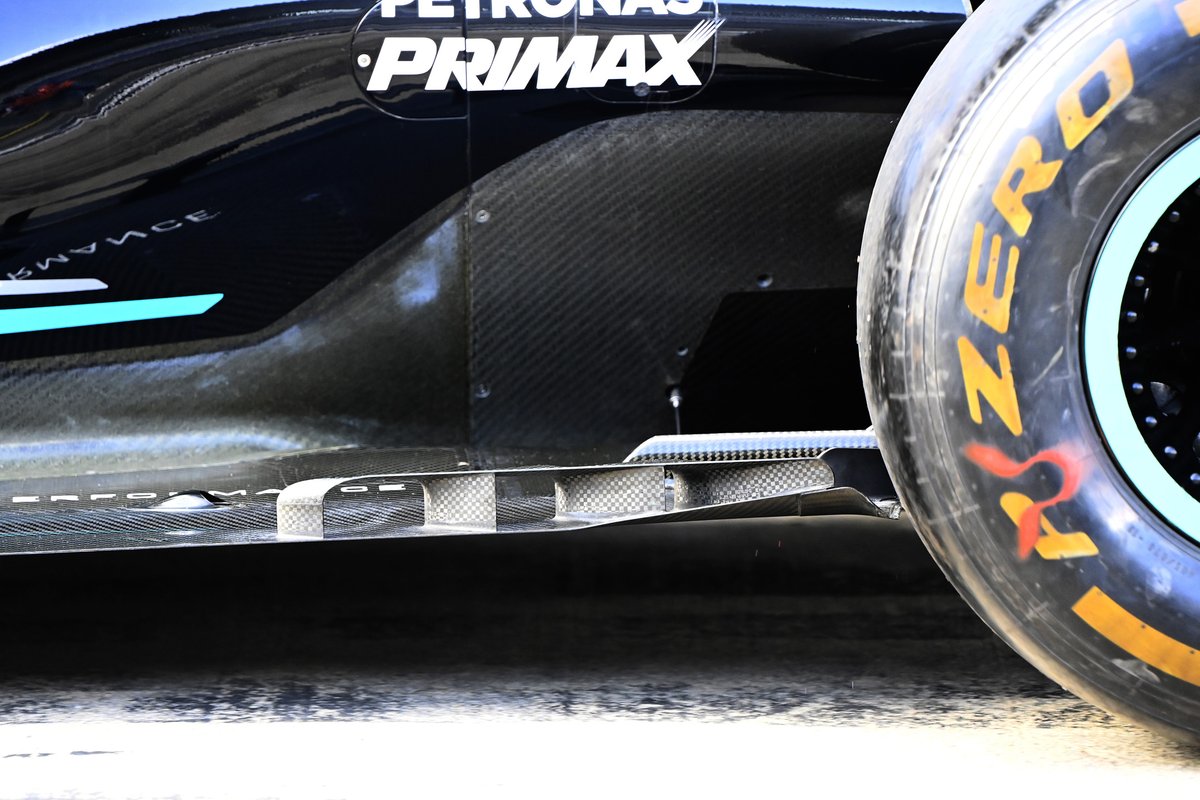 15/20
The floor ahead of the rear tyre on the Mercedes W12 has a scroll on the very edge and a substantial flap that stands proud of the floor, with variously angled fins housed within to help promote flow across and around the rear tyre face. 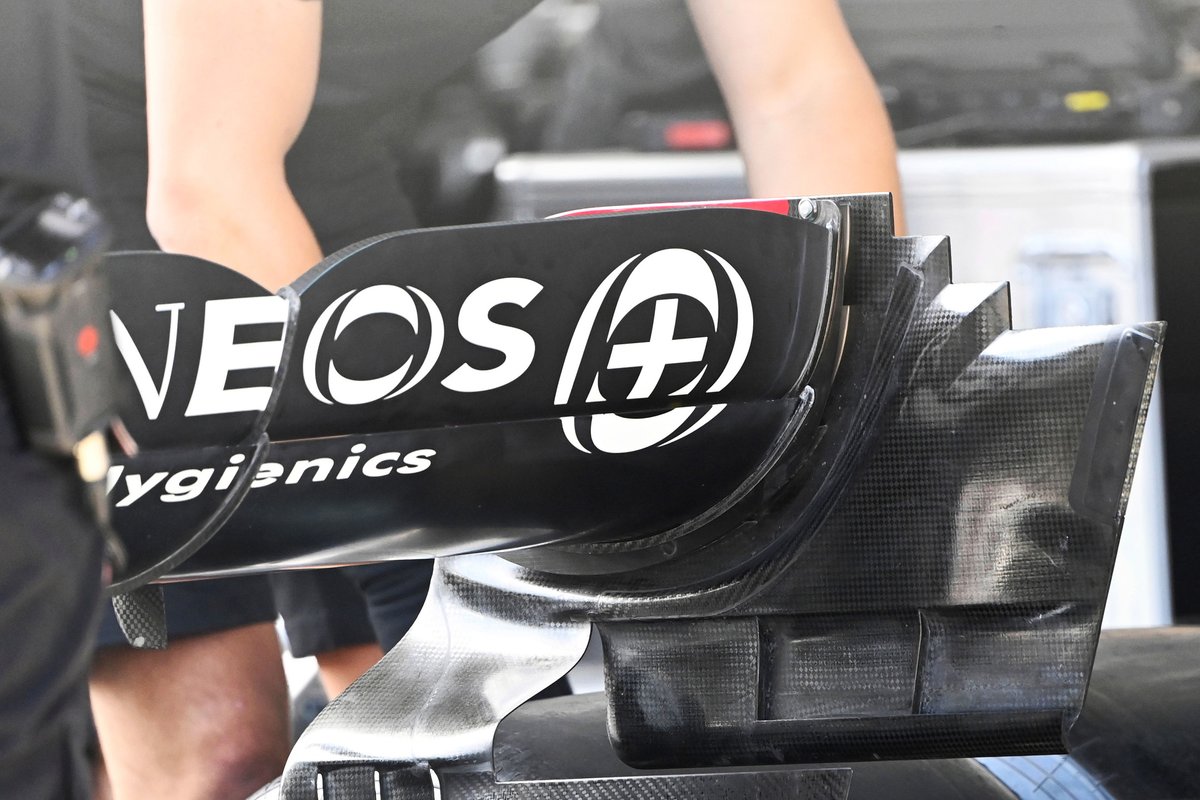 16/20
A closeup of the rear cutout of the Mercedes W12 rear wing endplate and the various contours used to create the serrated edge. 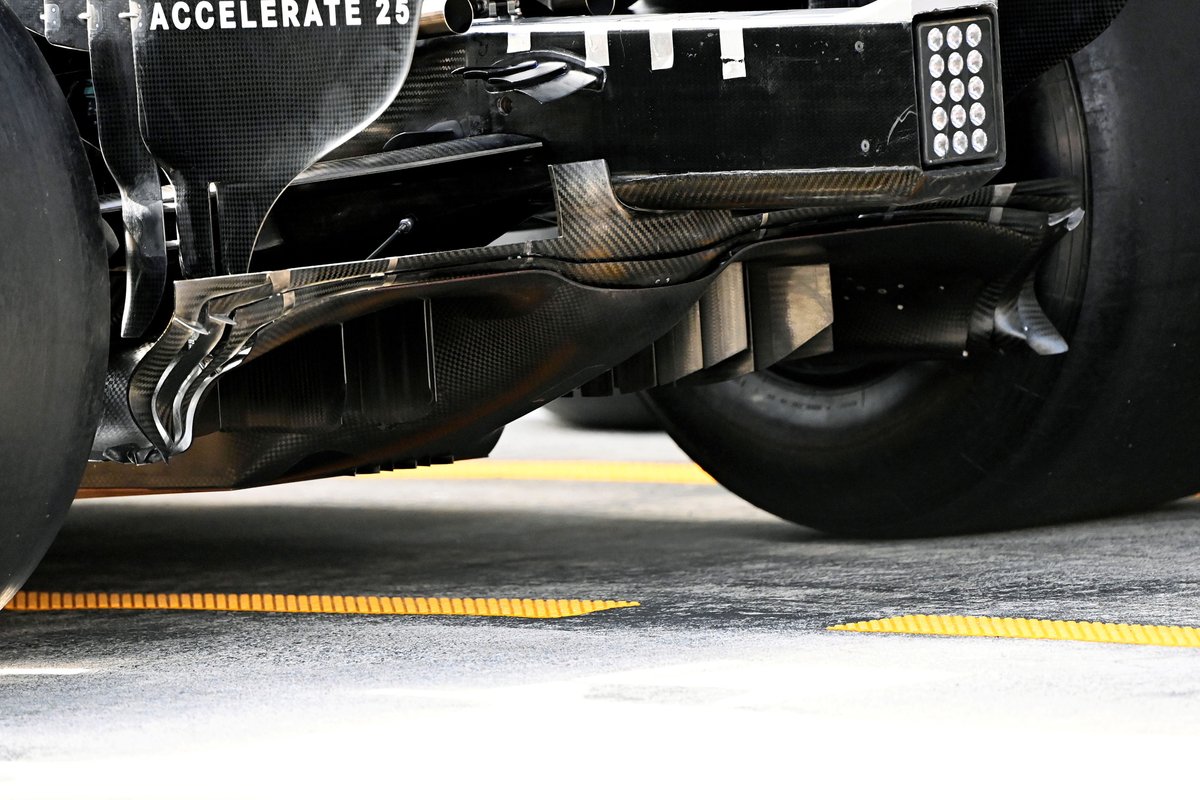 17/20
The Mercedes W12’s diffuser and lower half of the rear wing endplates. Also note the trio of winglets and their shape that are housed on the crash structure. 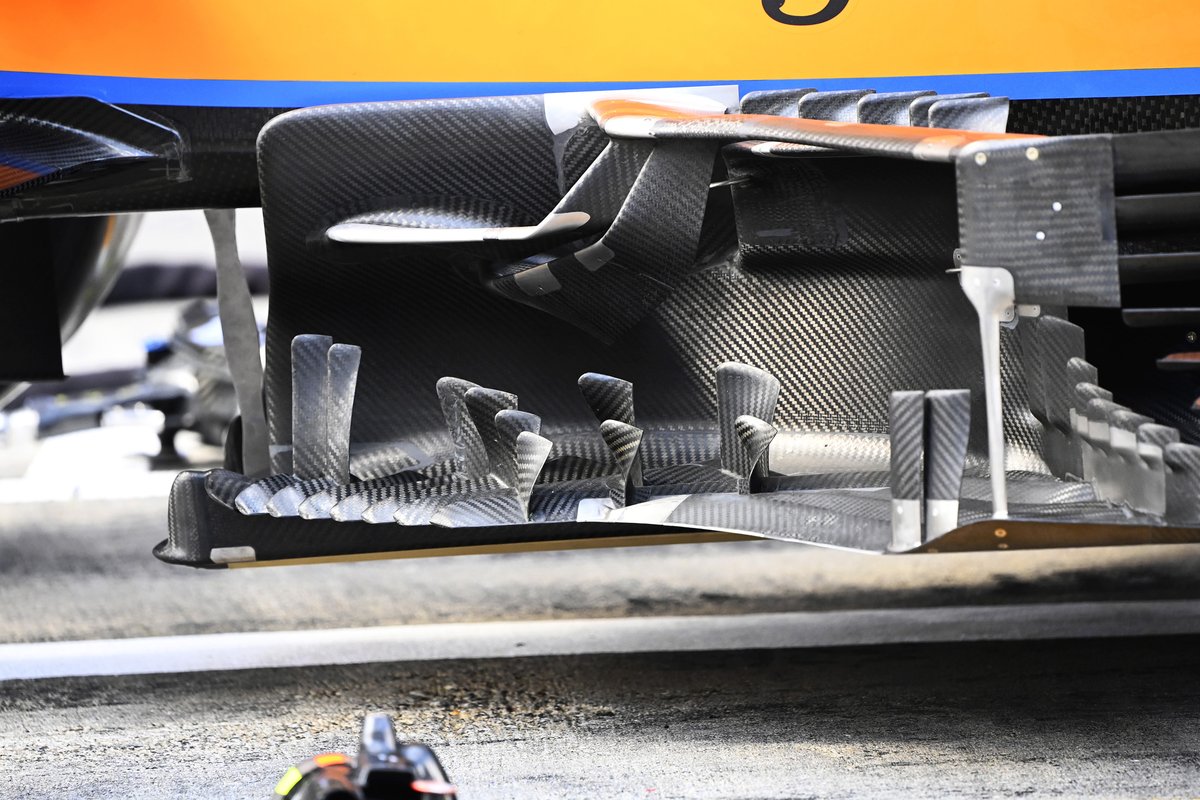 18/20
A closeup of the McLaren MCL35’s bargeboard cluster, with particular focus on the shape and direction of the fins mounted on the forward footplate sections. 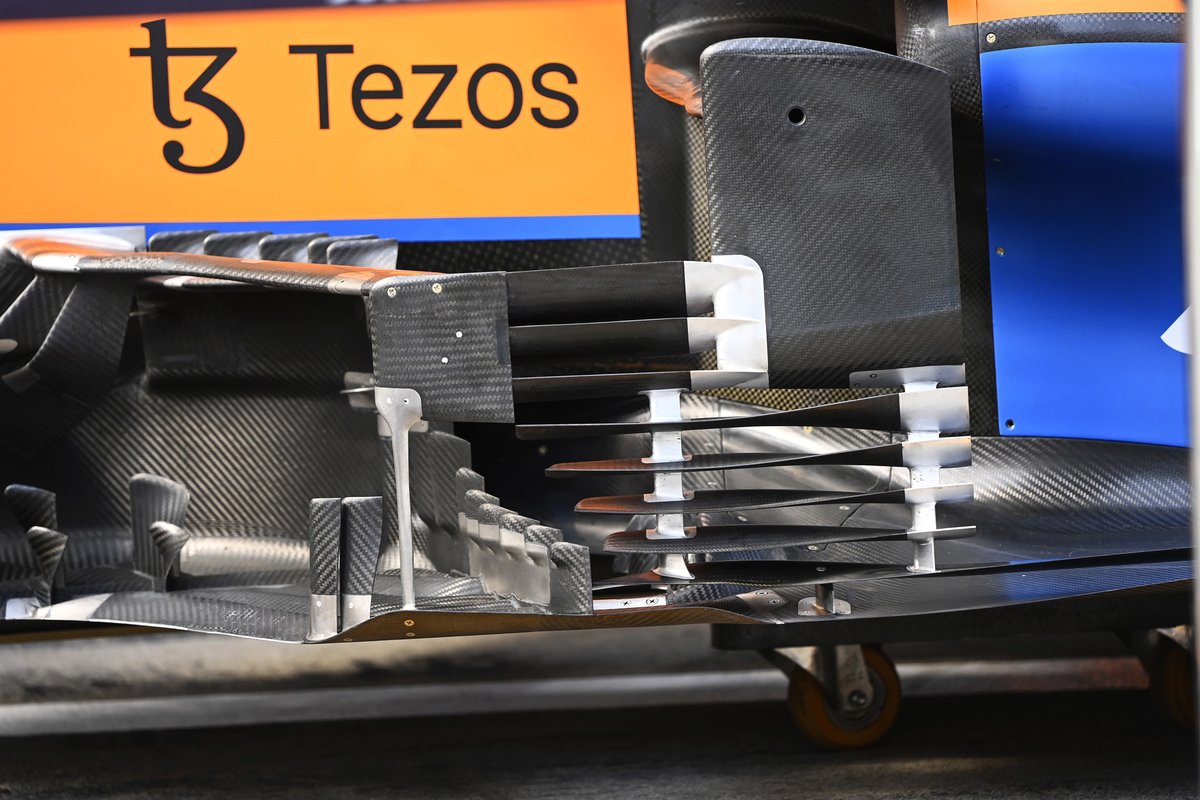 19/20
The sidepod deflector region on the McLaren MCL35M, which has what has become traditional fare up and down the grid in the form of the venetian blind-style array but note how they twist along their length to alter the direction and speed of the airflow passing by. 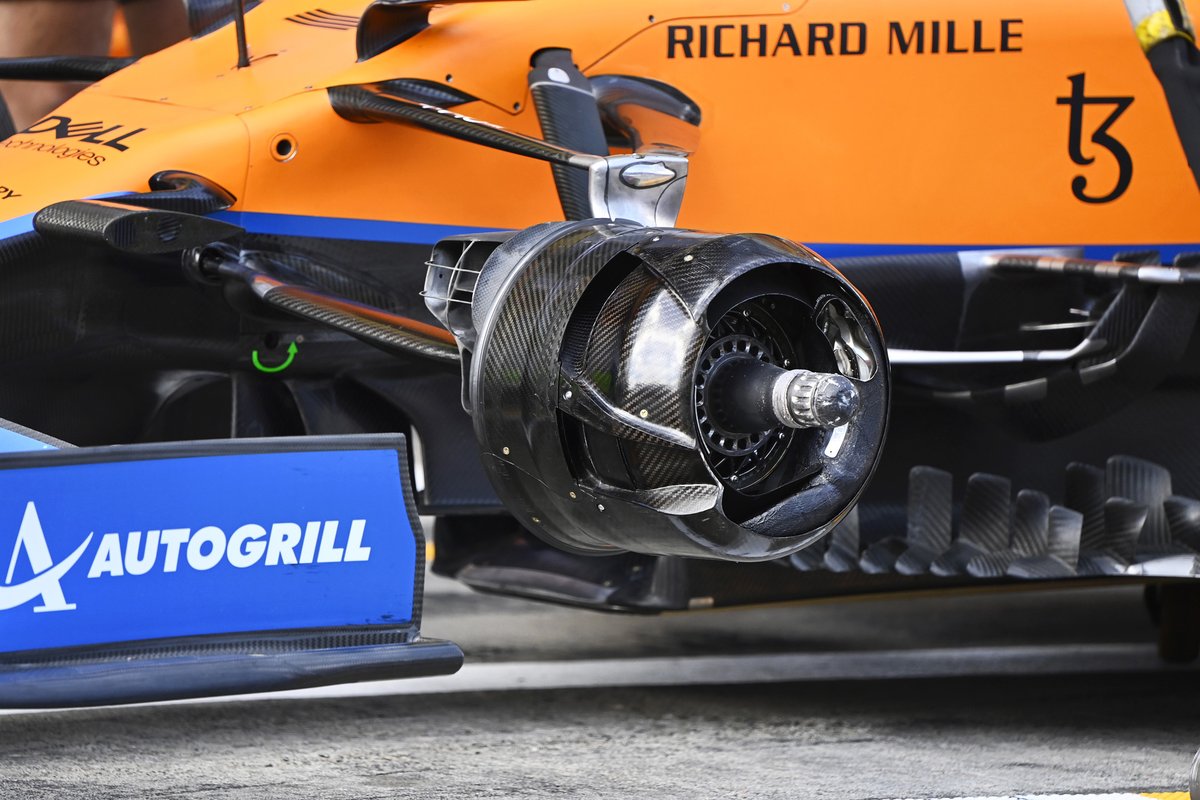 20/20
A closeup on the McLaren MCL35M’s front brake duct with just the right angle to show how airflow is fed through the two channels at the front of the assembly without ever really doing any kind of cooling. You can see how an aperture is made from the internal section too, as all of these avenues help to influence the airflow’s performance as it exits through the wheel face.