2017 heralds another new beginning for Formula 1, with significant changes to the cars that will not only have a visual effect but have both a mechanical and aerodynamic impact too.

Decreasing laptimes by five seconds has been the overarching goal of this regulation change, which has resulted in Pirelli supplying wider tyres and numerous changes made to the car's aerodynamic surfaces to achieve it.

The most noteworthy of these aerodynamic changes is the deltoid shaping of the front and rear wings and the leading edge of the sidepods.

While these changes were introduced to give the car a more aggressive and futuristic look, they will also force designers to rethink how they move air around the car. 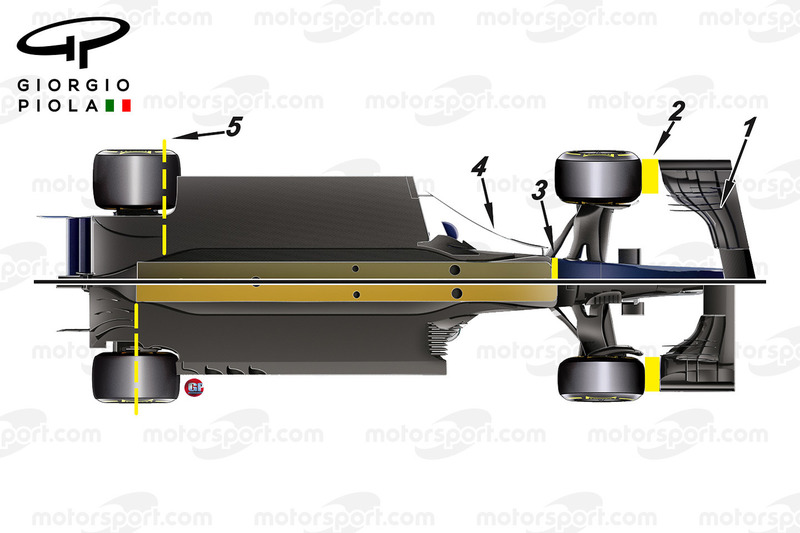 In order to understand some of the changes that will play their part in the shape of next year's cars we're going to look at part of the car that rarely gets seen: the underside.

Furthermore, the tyres contribute approximately 40 percent of the drag created by an open wheel car, if left untreated, making it the first point of call for a designer in search of a better drag coefficient. 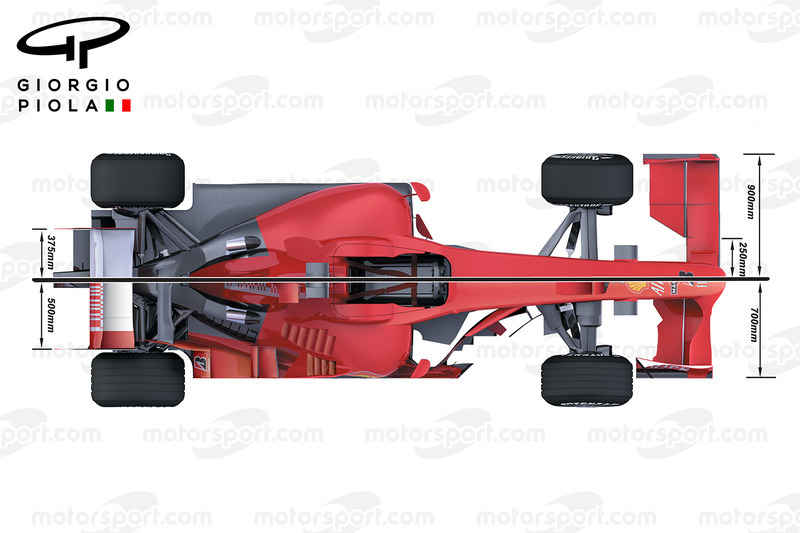 The regulation changes implemented in 2009 (above) forced designers to rethink years of doing the same thing. A neutral centre section was added to the front wing while its overall width was also increased to match the width of the car, but perhaps more significantly the bargeboards were dramatically reduced in size, changing how the wake shed from the front tyre was dealt with.

These changes were matched by reductions at the rear of the car too, in order to try and reduce the overall level of downforce that could be achieved, but it was the front end of the chassis that was the most affected.

Of course these were reduced even further in subsequent years, while the front wing was also narrowed, making life even more difficult for the designers who had been forced to use outwash front wings, rather than the inwash ones that had preceded them.

The intent of the outwash wings has been to pull outward on the wake generated by the front tyres, pulling it away from the smaller bargeboards, which offered less physical protection to the leading edge of the floor and sidepods than their predecessors.

The Y250 vortex, generated by the transition of the surfaces as the neutral section meets the flapped section, was used to protect the now-heavily shaped tyre wake and act like the enlarged bargeboard that the old regulations permitted. 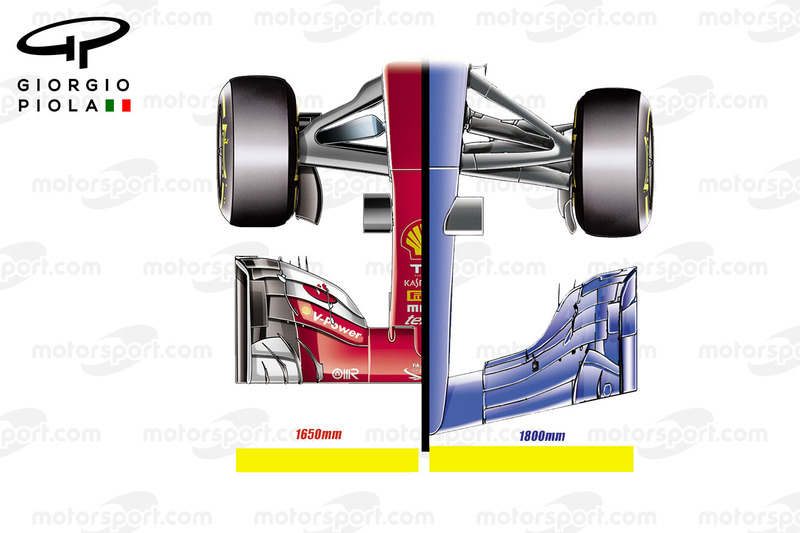 The 2017 cars will be somewhat of a halfway house, as the front wing features the neutral central section, albeit with the addition of the triangular front section, which gives the designers the Y250 vortex to play with - although its vorticity and direction is something that will be affected by the neutral sections movement further from the chassis, with the minimum nose length increased from 850mm to 1050mm. 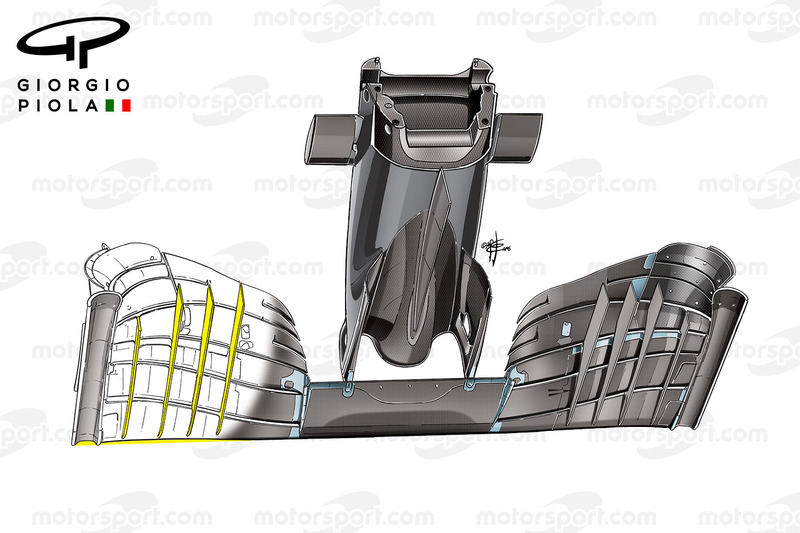 With just this information you'd expect the outwash style wings to be retained, but it's the reintroduction of the larger bargeboards [4] behind them that is the game changer. As we've already alluded to, their role in pushing the front tyres wake away from the floor will change how designers approach the design of their front wing.

We've already seen and discussed how teams are potentially going to favour an inwash design philosophy, albeit with some outwash tendencies to displace and harness the airflow spilt by the outer section of the tyre, McLaren's development wing (above) points at this very direction. 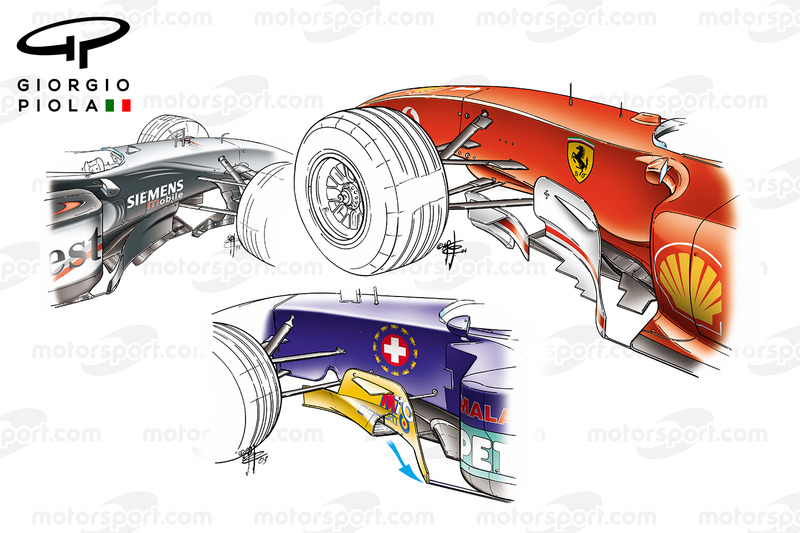 This is the first time that the sport has reverted its outlook on the speed of the machines, with significant downforce reductions made in 2009 and again in 2014 to curtail speeds and increase safety.

With that in mind, we can use the pre-2009 machines as somewhat of a benchmark when it comes to understanding just how complex the front of the chassis' may become and what ramifications that may have up and downstream of it.

The illustrations from 2003 and 2004, above, go to show the level of technicality that was prevalent in that era, with the pre-2009 machinery bristling with solutions in order to move and shape the airflow. 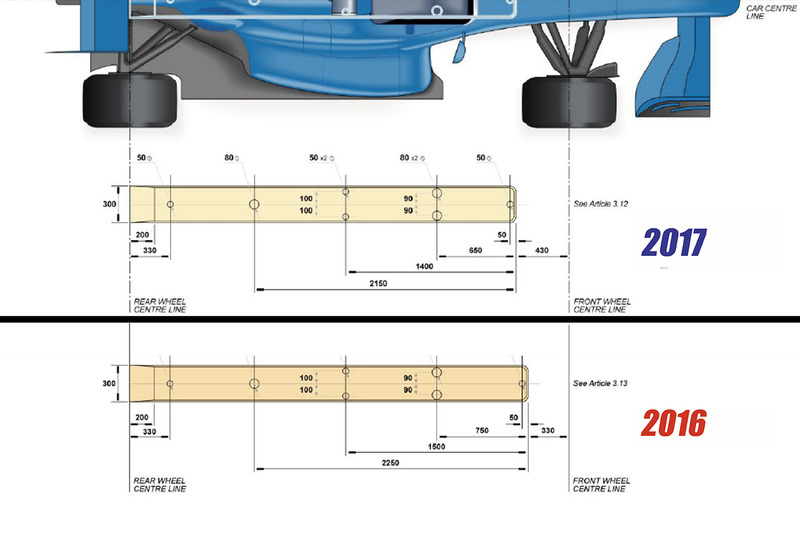 One of the factors behind an F1 car's ground clearance is the plank and at its forward most section we find the splitter, or 'T-Tray'. It's normal practice for a single-seater to be run with 'rake', as the nose down attitude of the car affords several mechanical and aerodynamic advantages.

From an aerodynamic point of view, there are two main reasons for following this philosophy: placing the front wing into ground effect and increasing expansion ratio of the diffuser.

The amount of rake that can be run is limited by the front edge of the plank coming into contact with the ground, with a compromise needed in order that it doesn't wear sufficiently that the stewards disqualify the driver.

It's something that we've even had controversy on down the years, with hinged and suspended splitters used to circumnavigate the deflection tests, improving how much rake can be run without falling foul of the scrutineers. 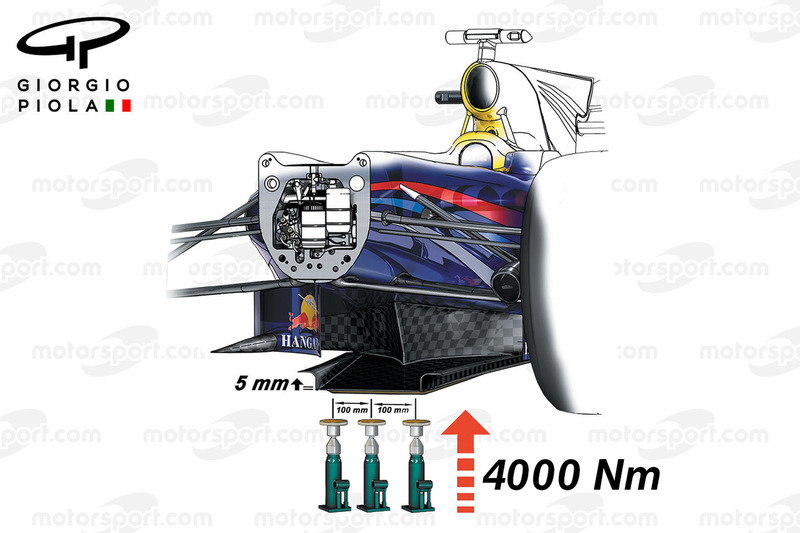 For 2017 though, the plank must now reside 100mm further back from the front wheel centreline. This will increase the challenge posed on circumventing the regulations, as the force applied to the area remains the same it does give further scope in terms of raking the car, potentially improving the downforce that can be generated if it can be exploited. 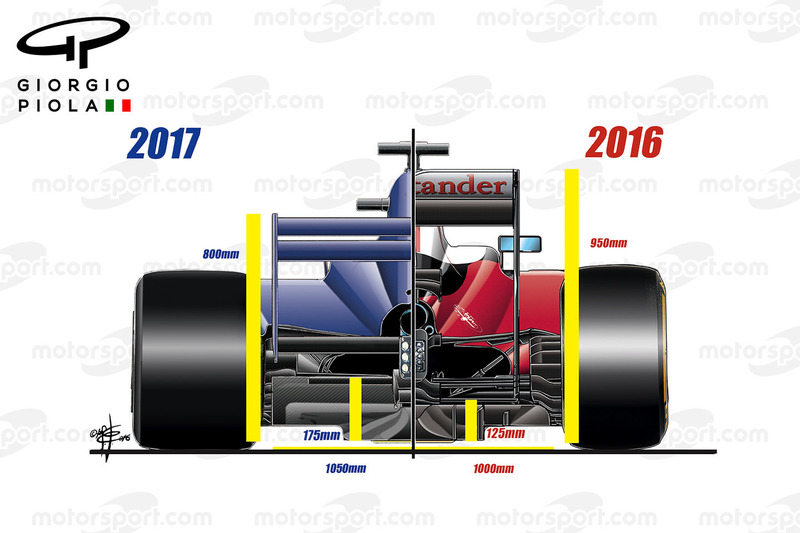 The dimensional changes at the rear of the car provide the designers with a huge scope for the design of their diffuser. Rather than starting on the rear wheel centreline, the diffuser can begin 175mm in front of it [5]. On top of this, it has been expanded in width by 50mm, up to 1050mm, and is 50mm taller, up to 175mm.

The 2017 regulations are a bold step in a totally different direction and should deliver close to the five seconds per lap decrease on the 2014 times that the FIA was looking for.

Clearly, the cars are going to be vastly different in the way they treat the airflow right from the leading edge of the front wing all the way back to the now tilted rear wing.

However, the framing of the new technical regulations against a backdrop of known solutions will inevitably lead designers down a semi-fixed path.

Even so, any regulation change of this magnitude will undoubtedly lead to several key developments that will lead to an intense development battle throughout the year as everyone converges on them.

Marciello gives up on F1 hopes amid "stupid" money demands