Honda's re-entry to Formula 1 as an engine supplier in 2015 has so far been relatively disappointing, with a target of matching the field-leading Mercedes having been pushed back several times.

2017 represents a significant milestone in Honda's effort to catch the pacesetters however, the FIA scrapping the token system as it looks to reduce the deficit of all of the power units manufacturers to Mercedes.

Honda's original power unit design was aggressive and by far the slimmest in the field, and was aimed at giving the chassis designers a helping hand with packaging.

But it was a mistake: the smaller turbo was unable to achieve the necessary boost levels needed to make use of the petrochemical energy, and limited the scope of the electrical motor generator attached to it.

Having condemned its own direction in 2015, the Japanese marque could do little to change its fortunes in 2016 and instead focused on a complete overhaul of the power unit's architecture for 2017.

A separate working group was established to work on the 2017 power unit, initially in parallel with its ongoing 2016 exploits, but as the season progressed more resources were channelled into the new design.

It's understood that Honda has backtracked on its original assertion that it can beat Mercedes by doing it its own way and will supply McLaren with a design very similar to the one run by the Mercedes-powered teams for the last three seasons.

This means focusing on three of the main aspects of the Mercedes power unit architecture and the works teams packaging of it. 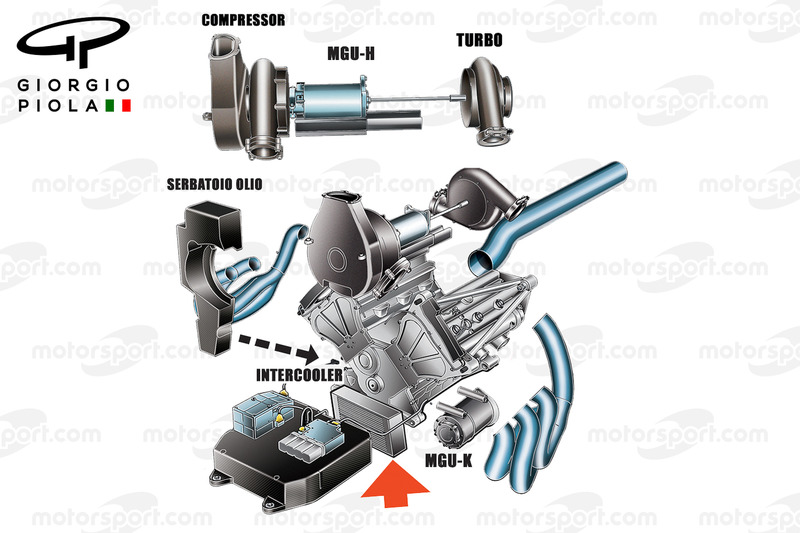 Glancing over the regulations in 2012, it was obvious that using the space between the engine's vee would be critical to packaging the ancillary components during this new hybrid era, especially given the use of just a single turbocharger on the cars centre-line.

This was a design decision that wasn't without its own drawbacks, given the rotational speeds of the turbo, but has allowed Mercedes-AMG HPP, who also plumped for the solution, to size both the turbine and compressor optimally without drastically affecting the power unit's length.

This is such an important and perhaps overlooked part of its design, with what seems like an overkill sizing of the turbo allowing more scope to create and use the electrical energy created by both the MGUs that make up the ERS.

The hybridisation of Formula 1's engines often leads us to only think of the electrical systems that have been added, leaving the petrochemical gains that have been made in the shadow.

However, when you consider that the power units are now producing more power than their V8 counterparts without the ERS, two less cylinders and a third less fuel, it's a staggering achievement.

Granted, forced induction engines don't need the same type of displacement to make the same power as their naturally aspirated counterparts, but it does usually come at the expense of fuel consumption.

In order to fulfil these gains, Mercedes worked closely with Petronas to supply fuel and lubricants that could improve the power unit's thermal efficiency.

One of the issues faced along the way was improving the knock limit. Renault has been pretty vocal about this since 2014, with Mercedes using a jet ignition system in order to run a much leaner fuel/air ratio and improve the combustion process - something that the rest of the manufacturers have followed with interest and began to adopt under the token system.

This was all possible because of Formula 1's move to direct injection and the way in which the regulations were written around it, allowing it to fire a small, precise high pressure jet of fuel into the cylinder which auto-ignites, improving the flame front before the conventional combustion event occurs with the assistance of the spark plug.

A feature of the works Mercedes cars since 2014 has been the liquid-air cooler (chargecooler) sandwiched in a void between the fuel cell and front face of the engine.

Others have dabbled with similar boost charge coolers, but none in quite the same fashion as Mercedes - and strangely enough none of the other Mercedes-powered teams, as others chose instead to place an air-to-air cooler in the sidepod (intercooler).

Ferrari's original power unit architecture took a chargecooler into account, mounted between the engine's vee, but it could be argued that heat soak from the surrounding engine components outweighed the advantage of the short boost tract.

But in 2016, Ferrari used a two-stage cooling arrangement, with a small air-to-air cooler mounted above the compressor at the rear of the engine before a boost pipe traversed the left cylinder bank toward a liquid-air chargecooler sandwiched between the fuel cell and power unit, much like Mercedes.

It's understood that Honda and McLaren have agreed that packaging the power unit and chargecooler must be dealt with in a similar way to how Mercedes has over the last few years, with Ferrari's solution seen as admirable but a compromise due to its turbo architecture.

Only Silver Arrows, no silver bullets

The fact remains that there is no single silver bullet, as all the engine manufacturers chase the bar set by Mercedes. What is clear though is that the power unit and chassis departments have to be co-ordinated in order to optimise the overall package, weighting an advantage toward the works teams.

The aero revamp that Red Bull has unleashed in Portugal

How Aston Martin is fighting back from its low-rake deficit