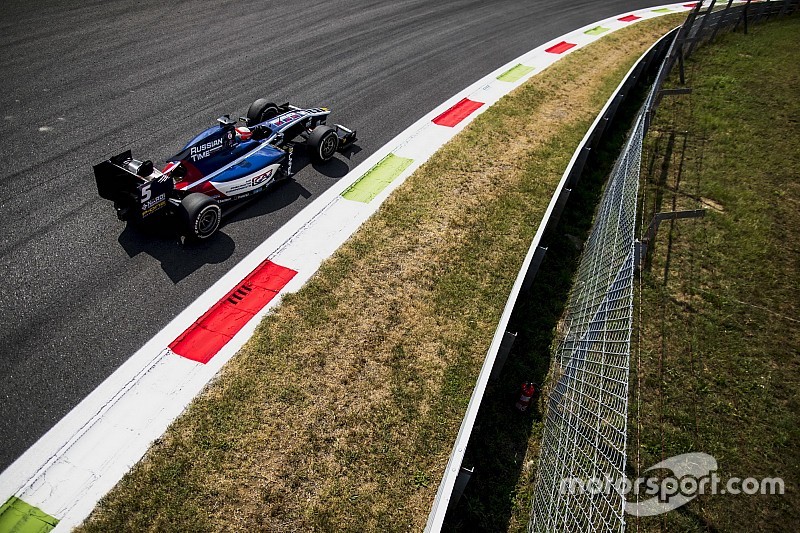 Ghiotto, who won yesterday’s feature race on the road before being demoted to fourth with a post-race penalty, charged up from fifth on the grid with a series of determined passes to seal his second GP2/F2 victory.

Championship leader Charles Leclerc fought his way to ninth after being involved in a late-race crash in the feature event, but could not score a point, while his title rival Oliver Rowland made his way up to 11th from 19th on the grid.

At the start, Sean Gelael made a lightning getaway to rise from fourth to lead into Turn 1 ahead of Louis Deletraz, as polesitter Gustav Malja made slow progress off the line.

Gelael led the early laps before he was overhauled by Deletraz on the run to Turn 1 at the start of lap four of 21.

Ghiotto began his charge by demoting Malja to fifth and then made his way into the top three as Sette Camara and Gelael fought over second on the exit of the Roggia chicane.

In a thrilling exchange, Sette Camara got ahead of Gelael on the approach to Lesmo one, where Ghiotto forcefully got by the Indonesian driver too, and Nicholas Latifi did likewise at the second Lesmo.

Ghiotto then took second when Sette Camara went wide at the Roggia and set about catching Deletraz.

He did so at the start of lap 11, pressuring the Rapax driver at Turn 1 before getting into first with a better run out of the Roggia.

From there, Ghiotto edged clear into the lead and eventually took the chequered flag with a margin of 2.2s over Sette Camara, who demoted Deletraz to third with a DRS-assisted move into Turn 1 on lap 12.

Fuoco, who inherited the race one win, made steady progress up the order from eighth on the grid and eventually caught and passed Deletraz for third place with a textbook move into Turn 1.

Deletraz held onto fourth ahead of his teammate Roberto Merhi and Gelael, as Nobuharu Matsushita and Alex Albon eventually claimed the final two points-paying places after a seemingly never-ending mid-pack scrap.

Leclerc was in the thick of the action after shooting up from 17th early on and he fought the ART Grand Prix cars hard as they came through the pack.

But the championship leader sustained damage challenging Latifi – who tumbled down the order after running high up early on – and he could not finish off his charge to the points, eventually coming home ninth.

Rowland also made good progress early on, attacking Leclerc at the Lesmos before dropping back, but could only rise as far as 11th, one spot ahead of Nyck de Vries.

Artem Markelov ended up 15th, just ahead of Latifi, following a late-race clash with Jordan King that sent the Briton across the gravel between the Lesmos.