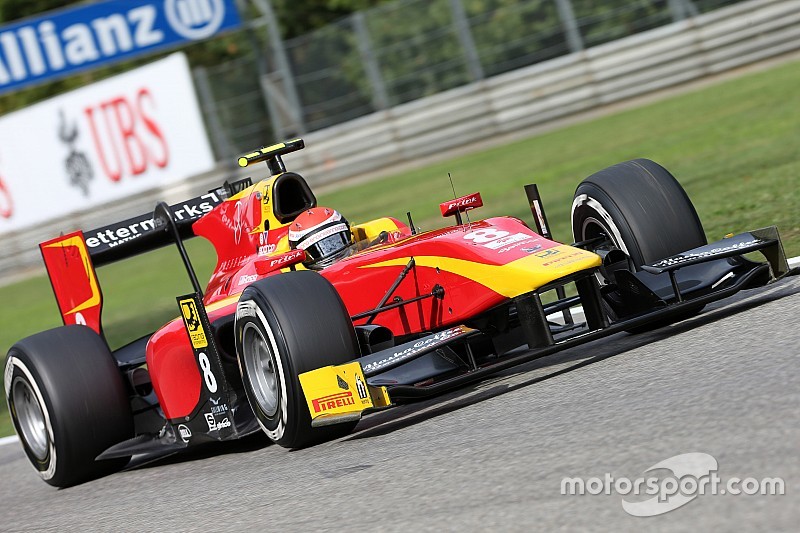 Alexander Rossi scored his second GP2 Series victory on the trot after overcoming Stoffel Vandoorne in the closing stages, while the challenge of the DAMS team – which ran 1-2 in the early stages – imploded in spectacular style.

From his first-ever GP2 pole, Pierre Gasly made a great getaway to lead from DAMS teammate Alex Lynn and Vandoorne.

Vandoorne bullied his way past at Roggia, the cars brushing wheels as he went around the outside, but Lynn got him back at Lesmo 2 after the championship dominator ran wide at Lesmo 1.

Gasly took a huge lead as they battled behind him, heading the field by 2.6s at the end of the opening lap. Sergey Sirotkin further demoted Vandoorne at the first chicane on lap two, and Rossi surged up to fifth from eighth on the grid.

Meindert van Buuren’s first-ever GP2 race – which he started from the pitlane after impeding a driver in qualifying – ended heavily in the wall at Ascari on lap three, which caused a safety car.

At the restart, Gasly led Lynn, Sirotkin, Vandoorne and Rossi. Lynn repelled attacks from Sirotkin at the first and second chicanes to cling on to second, but this again allowed Gasly to escape up front.

Lynn had a problem with the right-rear wheelgun sticking to the nut, so Sirotkin passed him in the pits (although Sirotkin would have a 10s penalty for an unsafe release). They rejoined nose-to-tail with Vandoorne, who had been lapping rapidly on fresh tyre, right behind them.

Vandoorne passed Lynn around the outside at Roggia for the second time on Lynn’s outlap, and then zoomed up to the rear of net race leader Sirotkin.

Vandoorne passed Sirotkin with ease at the first corner on lap 11, his run assisted by DRS. But Sirotkin passed him back in similar fashion a lap later.

Lynn passed Vandoorne on the run to Rettifilo on the following lap, but misjudged his braking completely and took out Sirotkin, who was lapping Johnny Cecotto at the time. Lynn was fortunate not to roll, as he flew through the air over the right side of Sirotkin’s car.

Just after half distance, new leader Vandoorne came under pressure from a charging Rossi, who briefly passed him at the Roggia before Vandoorne just held on.

Rossi went back into stalking mode, attempting to force a mistake from Vandoorne rather than passing him – despite the added benefit of DRS.

Rossi got a great run with six laps remaining, and managed to slip down the inside of the Belgian’s ART car at Rettifilo as Vandoorne failed to keep the door shut.

Vandoorne just couldn’t keep pace with Rossi in the closing stages, who got himself out of DRS range.

Arthur Pic was running third at this point, but had a big problem with his left-front brake disc, which was smoking heavily. Norman Nato passed him with three laps remaining, but he had a 5s time penalty to contend with.

Mitch Evans was a true star of the race. Having lost his front-row start due to a technicality, he charged from the back of the grid.

Evans passed Pic on the penultimate lap and kept Nato in sight to leap to third from 23rd on the grid. Richie Stanaway and Artem Markelov surged up to fourth and fifth respectively, as Pic’s car slowed on the final lap and finished seventh behind the penalized Nato.