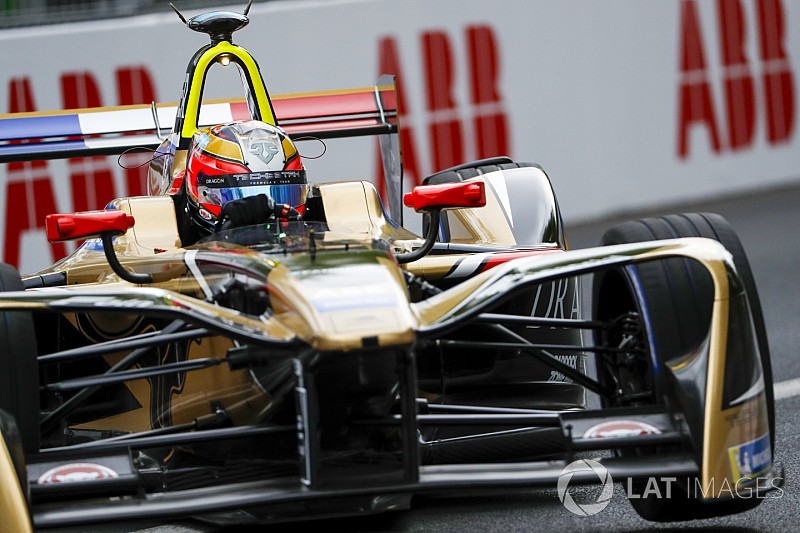 Jean-Eric Vergne cruised to his third Formula E win of the 2017/18 season on the streets of Paris, extending his championship lead to 31 points.

Techeetah driver Vergne held the lead at the start, but was unable to build a gap over Sam Bird, who nudged a fast-starting Andre Lotterer slightly wide at the first corner to hold on to second.

The trio quickly distanced themselves from the rest of the pack, headed by Maro Engel, and ran nose-to-tail for the opening stint of the race before pitting together on lap 24 of 49.

Vergne emerged from the car swaps with a small cushion over Bird, as Lotterer began to pressure the DS Virgin Racing driver for second, ultimately forcing his way back with a heavy-handed pass on lap 35.

That allowed Audi man Lucas di Grassi - who cleared Engel by staying out two laps longer - to catch up, and corners later he picked off Bird to move up to third.

Vergne by now had amassed a lead of over four seconds, and with Lotterer holding off a charging di Grassi the Frenchman was able to manage the gap for his third win in five races.

There was late drama however as Lotterer appeared to run out of useable energy on the last lap. That allowed di Grassi through to take second, but moments later an unsighted Bird clouted the back of the stricken Techeetah car.

Bird crossed the line third with his front-right wheel hanging off, followed by Engel (Venturi) and Sebastien Buemi (Renault e.dams). Lotterer coasted home for sixth, but his incident with Bird is under investigation by stewards along with his aggressive move on the Briton for second.

Daniel Abt (Audi) had passed Buemi but dropped back to seventh at the finish, ahead of Felix Rosenqvist (Mahindra), Oliver Turvey (NIO) and Jose Maria Lopez (Dragon).

The second Venturi of Edoardo Mortara rose from 19th on the grid to run as high as 11th after running longer than anyone in the first stint – but he fell to 13th after coming together with Lopez as he tried to take 10th in the closing stages.

Nelson Piquet Jr (Jaguar) and Tom Blomqvist (Andretti) retired shortly after their car swaps, as they were involved in a dramatic three-way clash with Nicolas Prost (Renault e.dams) on the opening lap.

Antonio Felix da Costa made it a double retirement for Andretti, pulling off the circuit just after the restart that followed the full-course yellow for the Prost-Blomqvist-Piquet incident.