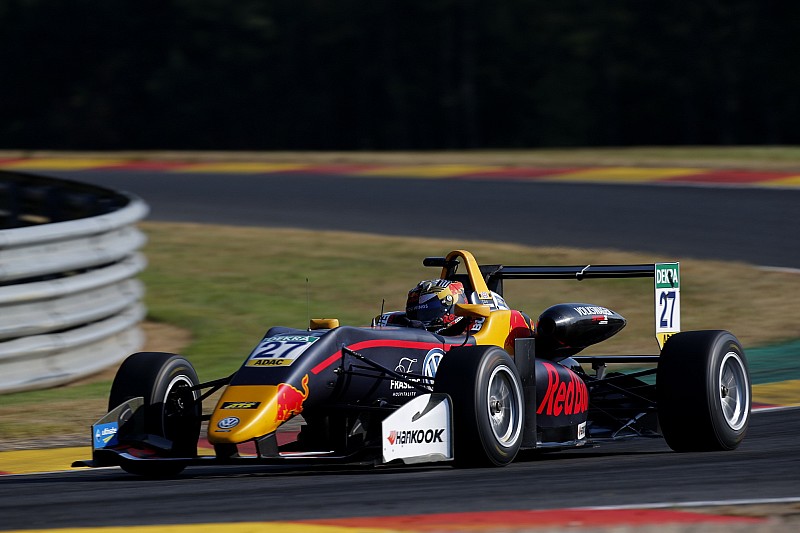 McLaren Autosport BRDC Award winner Dan Ticktum won a thrilling second race of the Formula 3 European Championship Spa round to propel himself into the points lead.

Red Bull Junior Ticktum rose from 10th on the grid to defeat Motopark teammate Fabio Scherer after a number of exchanges between the two.

The Motopark duo were gifted places at the start, when Mick Schumacher wheelspun away from pole.

As Ralf Aron accelerated into the lead from the outside of the front row in his Prema Powerteam car, his teammates Schumacher and Guan Yu Zhou made contact, with Schumacher sustaining a puncture and Zhou front-wing damage – the fourth Prema driver, Marcus Armstrong, ran wide at La Source in avoidance.

Juri Vips therefore rose from sixth to second in his Motopark car and onto the tail of fellow Estonian Aron, F3 rookie Vips slipstreaming into the lead on the Kemmel straight on the second lap.

Two laps later there was a Tallinn implosion, as pre-race series leader Aron tried to retake the lead at the same spot and the duo collided, forcing both out of the race.

Scherer inherited the lead from Prema’s Robert Shwartzman and Ticktum, before Ticktum passed Shwartzman on the Kemmel straight on the sixth lap.

Two laps later Ticktum made his move to pass the Swiss, having to defend into Les Combes to protect his hard-won advantage.

That lead lasted only a lap, as Scherer moved back in front, before Ticktum made the decisive pass on the 11th lap of 16.

He was already in front at the exit of Raidillon, and then once again had to defend into Les Combes.

Although Scherer, whose tyres were fading, made a couple of feints over the following laps, Ticktum was able to hang on and had broken the tow with a lap to go.

“Most of the season us a team have been fighting each other quite a lot to the detriment of the whole team,” said Ticktum.

“This race we showed each other a lot of respect, although I’m sure it was horrible for Fabio when I was catching.

“When I was in front, I’d try to build a gap in sector two but in sector three and one he’d be right there again.”

Scherer in turn had his hands full with first-race winner Jehan Daruvala, who had stormed through from 12th on the grid in his Carlin car.

Despite a mistake at Pouhon, Daruvala was right on Scherer’s tail as they crossed the line, but couldn’t quite find a way past.

Shwartzman lost fourth place to fellow Russian Nikita Troitskiy with three laps to go, but Troitskiy then dropped places and ended up eighth.

As such, Schwartzman took fourth from Enaam Ahmed (Hitech GP), while the recovering Armstrong passed Carlin’s Sacha Fenestraz for sixth on the final lap.

Jonathan Aberdein was ninth in his Motopark car, while Carlin driver Ferdinand Habsburg – who like Armstrong lost places when he was forced wide at La Source after the start – wrested the final point away from Alex Palou on the final lap.