Making the call - When to call in looking to replace an injured driver?

I have a few lawyers among my circle of friends and acquaintances (and if you don’t, go out and find one yourself – you never know when you are going to need advice!) and it is pretty much taken for granted that calling a lawyer an ambulance chaser is about the most derogatory term you can use to describe one.

But in recent years it has come to pass that race-car drivers are the new breed of ambulance chasers – and as macabre as it might seem given the risks that all racers take when they strap into a car – the term doesn’t really bother either the chaser or the chasee.

The thought struck me as we were told by Roger Penske about the deluge of calls he received within hours of the now-deposed A.J. Allmendinger testing positive for amphetamines and being suspended by NASCAR. How can a driver have so such blatant disregard for another driver than to call and try to swipe his seat out from under him?

The answer is simple. A driver has to eat.

“You have to look out for number one,” said Indy Car star Graham Rahal. “It’s your career and while you hate to see anything happen and see anyone get hurt, you have to put yourself in position to be considered, because you know other guys will be doing it. You have to take every opportunity you can get.” 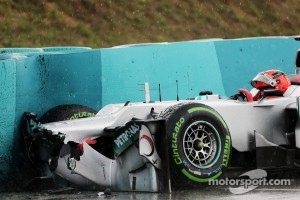 When do you call to ask if you can drive Schumi’s Mercedes?

And the phenomenon doesn’t end at out-of-work guys looking to be replacements.

In 2005, Rahal Letterman Racing had the cars to beat at Indianapolis as the month of May began. Buddy Rice was the defending race winner and Danicamania was just about to take hold as the team’s GForce chassis in the hands of one of the best teams in the paddock were absolutely on rails.

Unfortunately, the rails came off for Rice, as he crashed hard in practice and ended up with a broken back. As the team manager was leaving the hospital, he answered his ringing cell phone to hear a solicitation for a ride on the other end.

“Uh hello, I was wondering what you guys were going to do to replace Buddy for the rest of the month. I would sure like to be considered and could start tomorrow.” came the voice on the end of the phone

“Don’t you already have a ride this month?” answered the manager.

“Oh yeah, but I’d dump those guys to come drive for you.”

It is that me-first mentality that drives guys to try and make the jump to a plum ride, no matter how it comes open, and HVM Racing owner Keith Wiggins reports that it is just part of the game these days.

“Usually the phone is pretty warm within hours of something happening. I don’t take it badly, and there have been situations where I have forgotten about guys and them calling makes me think about them,” Wiggins said. “Generally if a driver approaches you, I take it that they are trying to further their career. If you have to replace a driver, you need to know who is out there and a driver that is available can help themselves by letting you know.”

And today’s racing climate actually makes the ambulance-chasing call the way to go for many drivers. In the late 1990s, the CART paddock was littered with guys like Memo Gidley, Roberto Moreno and Richie Hearn who had their helmets in the car and were always there at a moment’s notice to step in. Moreno and Gidley actually had some nice seasons and good results doing just that. But now, the lack of real sponsors and the prevalence of ride-buying drivers in the series have pretty much made the Super Subs obsolete.

“Now teams aren’t paying drivers, drivers are paying for their rides, or sponsors are providing money for certain drivers, so if someone gets hurt it isn’t just as easy as plugging in the next driver,” Wiggins said. “You have situations where if your sponsor pays for a driver and that driver gets hurt, they may not want to spend the money on a substitute, and then you have bigger problems.”