DAYTONA, FLA.– Having found success during the 2012 GRAND-AM Rolex Sports Car Series, three team owners have today been named as candidates for the 2012 Rolex Bob Snodgrass Award of Excellence, presented by Gorsline Company. 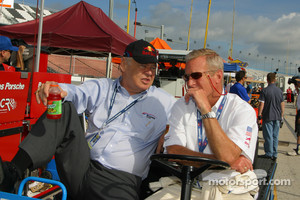 The award recipient will be chosen by a panel of motorsports professionals and announced on Friday, January 27, 2013, during the Grand Marshal dinner which is the traditional prelude to the Rolex 24 At Daytona. The 2012 honoree will be presented with a specially-engraved Rolex Stainless Steel and Platinum Yacht-Master timepiece.

The Rolex Bob Snodgrass Award of Excellence was created to recognize the team owner or team manager who has demonstrated the qualities of integrity, passion for the sport and the love of cars for which Bob Snodgrass was known during his life and career. The award – supported by Gorsline Company, the premier insurer of high-risk professionals – has been presented to Bob Stallings (2010) and Joe Sahlen (2011). The team owners who are candidates for the 2012 Rolex Bob Snodgrass Award of Excellence are: 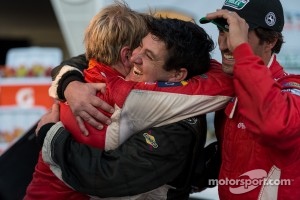 Peter Baron with an embrace for Ryan Dalziel

Peter Baron of Starworks Motorsport (Ft. Lauderdale, Fla.)
2012 was a breakthrough year for Baron's Starworks Motorsport, winning major races and championships on two continents. At the 50th Anniversary edition of the Rolex 24 At Daytona, Baron’s #8 Ford Riley started from pole position and missed taking home the win by a breathtaking 5.198 seconds. During the inaugural Brickyard Grand Prix, Baron’s #2 Ford Riley took the checker and with it the DP class win of the inaugural North American Endurance Championship, while yet another GRAND-AM Rolex Sports Car Series win came at the Continental Tire 200 in Watkins Glen.

Starworks was first in LMP2 and third overall at the 60th anniversary of the 12 Hours of Sebring with the Honda Performance Development ARX-03b co-driven by Enzo Potolicchio, Ryan Dalziel and Stephane Sarrazin. Starworks took ALMS class victories at Long Beach, Road America and Baltimore, as well as the LMP2 win of the WEC Six Hours of Sao Paulo. The team also won at Les 24 Heures du Mans and Petit Le Mans, and became the first-ever recipients of the FIA Endurance Trophy for LMP2 teams. 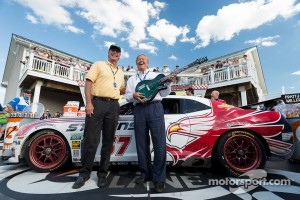 John Stevenson of Stevenson Motorsports (Jacksonville, N.C.)
John Stevenson is a patient man. Having finished third in the 2009 and 2010 GRAND-AM Rolex Sports Car Series GT championships, he kept the nucleus of his team intact behind team manager Mike Johnson and lead driver Robin Liddell (England). Racing in all 13 of the 2012 series’ events, Stevenson Motorsports took second overall in the series after wins at Watkins Glen (where the #75 Camaro GT.R started Sahlen’s Six Hours of the Glen in pole position), Montreal and Lime Rock (building from the pole start of co-driver John Edwards, with three laps remaining Liddell came from behind in the #57 Camaro GT.R to secure the team’s third win of the season). Stevenson is the driving force behind the Stevenson Automotive Group, a leading automotive influence in southeastern North Carolina since 1983. 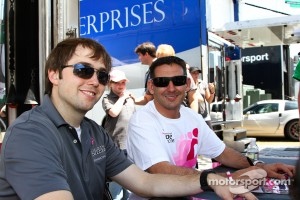 John Potter of Magnus Racing (Salt Lake City, Utah)
Potter’s Magnus Racing team started the year with a bang as they broke into the winning ranks of the GRAND-AM Rolex Sports Car Series in 2012 with the GT class victory at the Rolex 24 At Daytona. After Potter escaped from a nasty fire during the early laps of Sahlen's Six Hours of The Glen, the #44 Magnus Racing Porsche GT3 Cup car, which Potter co-drives with Andy Lally (Northport, N.Y.), took the checker at the Brickyard Grand Prix which also secured the team the history-making class win of the inaugural North American Endurance Challenge. Additional podium finishes (both third) were earned at New Jersey Motorsports Park and at Mazda Raceway Laguna Seca.

About Bob Snodgrass - Snodgrass, who passed away in 2007 at the age of 64, was president of Brumos Racing, and president and CEO of the Brumos auto dealerships in Jacksonville, Fla., where he lived for 35 years. As a team owner he had three Rolex 24 At Daytona wins (Brumos Racing has eight) and a total of 10 wins at Daytona. He was a driving force behind the formation of the Grand American Road Racing Association and the Daytona Prototype class. Born in Elmira, N.Y., he saw his first race at Watkins Glen, N.Y., and was hooked. Famous for his humor and wit and an accomplished vintage-car racer, Snodgrass (and Peter Gregg, who owned Brumos Porsche from 1965 until his death in 1980) was instrumental in Brumos' entry into motorsports.